A report by Jack Baugh for The Gazette.

PAISLEY actor Gerard Butler turned director for the day as he helped schoolkids in the Caribbean produce a nativity play.

A video of the Hollywood star’s trip to Haiti shows him making costumes and coaching young actors ahead of the performance.

Butler, whose home in Malibu, California, was partially destroyed in last month’s wildfires, said he was “cheered up” by his visit with Mary’s Meals – a charity providing school meals for children to encourage them to attend lessons and help them out of poverty.

He said: “I’ve been cheered up no end by these beautiful souls, who despite living in a country that has gone through so much hardship, have nothing but love to give.”

Butler – star of hit films such as 300, Law Abiding Citizen and Olympus Has Fallen – added that he was surprised to see what schoolkids in the Haitian city of Mirebalais were able to create from very limited resources. 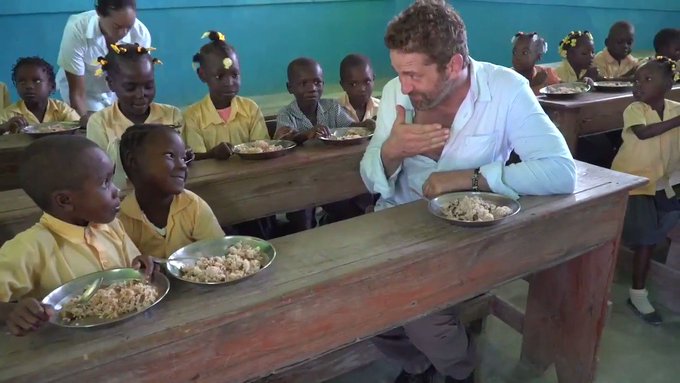 1/2 Around 61 million of the world’s hungriest kids do not attend school. To survive, they have to work or beg. Even if they do get to school, hunger affects their ability to learn. Last week in Haiti, I saw how @MarysMeals school feeding programs transform lives. #GivingTuesday

“You get there and there are no costumes, no nothing, so we were really starting from scratch,” he said. “They surprise you with their ingenuity and how they make the most of what little they have and suddenly you’re like ‘This looks like a proper play.’

“It was way more than charming, it was incredible.”

Mary’s Meals runs school feeding programmes in 17 countries and, until March 1 next year, public donations to its Double The Love campaign are being matched by the UK Government.

To find out more or make a donation, visit the website at www.marysmeals.org.uk.