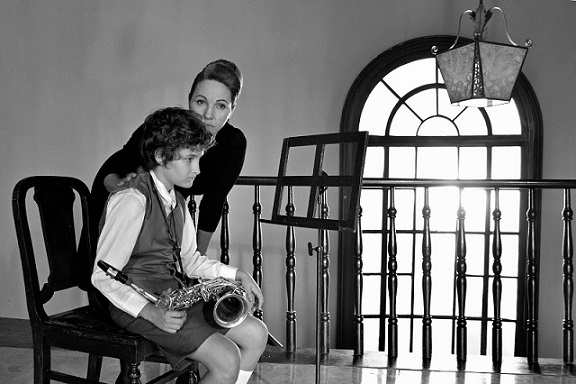 The new Cuban film Club de jazz [Jazz Club], by Esteban Insausti, has been screening around Havana (at the Charles Chaplin, Acapulco, and Riviera Theaters) and will continue showing through November 18. It is Insausti’s third feature film. Maya Quiroga reports for Cuba Now:

The film, narratively constructed in three acts, has as its epicenter an old jazz club that is due to be demolished. The film revolves around envy, according to Esteban, “an emotion too dark to dialogue with, a feeling that is rarely broached the audiovisual field, and which I think is worth doing.”

For actor Héctor Noas, one of the protagonists of the film, another one of the themes that runs through the plot is about to using power as a means to subjugate others and using the talent of others for one’s own benefit, a very important issue in these times, when so many political paradigms are collapsing.

The first story (alto sax) is played by a poor, but prodigious, boy with enough talent to win the most important solo contest in town at the end of the 50s.

The second story (double bass with bow) recounts the decadence of a vanguard bassist who suffers the obsessive persecution of a mediocre critic.

Finally, the third story (piano solo), set in the current moment, presents the promising career of a young Catholic pianist—one of the people—who will have to face evil, beyond his own talent and ingenuity.

This is Esteban’s latest homage to classic Cuban cinema: to Humberto Solás and his feature film Lucía. With Club de jazz, he successfully retraces the path of [Solás’s] auteur cinema, but with his own mark. Filmed entirely in black and white, the director had for its conception, as a fundamental premise, to achieve the greatest possible representational austerity. Among his visual references is the film Ida, by Pavel Pawlikowski, who won an Oscar in 2015.

“Club de jazz was designed for the color gray, due to the immobility of the characters. For me, black and white has many nuances, and today there is a return to film that is not in color; it is a trend. This timeless film is not limited to a specific reality. The scenographic design, the costumes and the textures all work towards reaching that goal,” explained the director in a meeting with the press.

Very much in tune with the principles outlined in the script by the director was the director of photography Ángel Alderete, who had worked with Insausti a few years ago with still photo for a jazz album cover. [. . .]