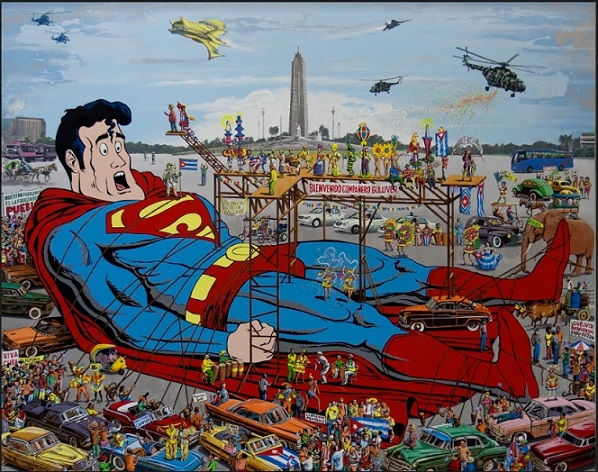 The title “Buena Vista” resounds like a musical and cinematic reminiscence, between Compay Segundo and Wim Wenders. It summons the fragrance of mint on three notes of salsa.

It is a dense and multifaceted panorama of contemporary Cuban art in a harmonious alliance of extremes: a confusing plastic innovation, with a renewed pictoriality in contestation of traditional support on the one hand, and a mastered practice of traditional engraving techniques on the other. An undeniable anchor in the daily, spiritual and political life of Cuba on the one hand and, on the other hand, a multiplicity of mythological, romantic, and religious references.

In this exhibition, even the most traditional works, paintings and pigments, invent a new pictoriality. New gestures create an unexpected rendering. Thus, José Yaque applies his pigments by hand and then wraps his painting with plastic wrap for culinary use, which he removes when the material begins to dry. The painted surface seems to be eroded.

Alejandro Campins covers his canvas with transparent paper in search of a form of depth for his “Banderas de benediction,” somewhere between Tibetan prayer flags and linens drying on clothing lines hanging between two buildings. [. . .]

Mendive’s works are hybrids, neither paintings, nor sculptures, nor objects, but rather all of them at the same time, garnished with sewn cowrie shells. In Mendive’s “Energía del mar,” the metal frame is an integral part of the creation and the painted forms are reproduced and cut in the sheet. The distinction between the frame and the canvas is abolished. It is a whole.

Roberto Diago and Mabel Poblet go further in the act of deconstruction. Roberto Diago cuts the canvas into squares before recomposing it and gluing it together to create a relief. Mabel Poblet’s works, new interpretations of the genre of the landscape, are made of acetate sheets, fragments of photographs that have been chopped up, broken, cut apart, exploded, and then reconstituted in relief and superimposed on a round background, thus challenging both the flatness of the canvas and its traditionally rectangular or square format.

Alongside these transgressive techniques, there are the traditional engravings, collographies, chalcography, aquatint, and xylography of Belkis Ayon and Sandra Ramos.

Beyond the plastic issues of innovation or tradition, what do we discover about the daily, political, spiritual, and even psychological, dimension of Cuban life in this “Buena Vista” exhibition?

The perceptible bareness of the assemblage of Roberto Diago’s “Variaciones de Oggun.” It is a collection of rusty metals and used sheet metal found in his neighborhood, embellished with a few words, mi casa, mi cielo, mi dios, mi árbol. It is an evocation of the artist’s environment.

[. . .] Racial conflicts are present in Diago’s work, but also a painting by Esquivel where a pair of boxers in black and white, positive-negative, fight under the smile of someone we think we recognize as Obama, “Smile, you won.”

Diago, Fonseca, Barroso, and Esquivel, as well as Toirac, Francisco, Tamayo, and Ramos take a critical look at Cuban reality. Tamayo, Francisco and Ramos evoke Cuba’s relations with the United States. If Tamayo seems—in a humorous, comic-book style—to express the wish for a reversal of American supremacy, Francisco, in “Fábrica de utopía,” seems to assimilate political processes by painting a flag factory where everything is jumbled: the stripes—blue and white, white and red—and the stars of the Cuban and American flags.

The elongated shape of the island of Cuba becomes a casket from which many evils escape in Sandra Ramos’s “Caja de Pandora.” A little girl in a Cuban school uniform, Alice (Sandra’s double), half-opens the box, while Uncle Sam, an American-style cartoon, paces on the lid martially, preventing it from opening completely. However, Liborio, the Cuban peasant, and Bobo the fool, manage to escape. These are famous and very popular Cuban caricatures. Then we have the symbol of the Cuban bureaucracy, a strange little man with a rubicube head, a jigsaw puzzle of the seventies, and then the figure of a jinetera, the prostitute. [. . .]

Then there is the obsession with exile and migration, seen through the obsession with the sea in both Ramos and Kcho’s work. This Cuban artist, internationally recognized since 1994, composes his work exclusively with images or objects that evoke the sea: boats, oars, old tires transformed into buoys. At the entrance of the exhibition, an installation—and accumulation of boats—quite representative of his creations, imposes its power. With “Milagro,” Kcho extends the theme of migration to the migratory movements of the rest of the world, as a tribute to all the balseros ready to brave all dangers for a better world. [. . .] Soto’s installation “Marea alta,” in which the spectator is immersed, translates both the temptation and the phobia of the sea, of travel, of shipwrecks.

[. . .] The vitality of Afro-Cuban religions is present in the works of Belkis Ayón and Manuel Mendive. Daily life is deciphered in Tamayo’s “Gulliver” where we recognize the hitches, the coco-taxis, American cars, the bici-taxis of Havana, and the omnipresent musicians in the streets, in the bars. Popular Cuban caricatures Liborio and El Bobo appear in Ramos’s engravings.

“Buena Vista” offers a distillate of Cuba, between gravity and lightness, but always with virtuosity and such a density that you will not fail to discover many other peculiarities.