A report by Erica Ayala for Think Progress.

The city of Holyoke is 88 miles west of Northeastern University where Dallas Mavericks guard José Juan “J.J” Barea attended college. The small city with a population of 40,341 is another 1,688 miles from his hometown of Mayagüez, Puerto Rico.

Yet, you wouldn’t know that upon entering the gymnasium at Holyoke High School on Friday, September 7. Barea received a hero’s welcome from hundreds of students and community members for his relief efforts in Puerto Rico. They cheered as Mayor Alex Morse declared the seventh day of September forevermore J.J Barea Day.

The evening before arriving in Holyoke, where thousands of Puerto Ricans are now displaced, Barea received the Mannie Jackson Human Spirit Award at the Naismith Memorial Basketball Hall of Fame for his humanitarian work.

The devastation caused by Hurricanes Irma and Maria last year left the island wrecked. The Puerto Rican government recently announced a revised death toll of 2,975 from the 2017 hurricanes, and the chaos that followed.

Over the span of several months, Barea took five trips to Puerto Rico and delivered 100,000 pounds of supplies. Through the J.J Barea Foundation, he also raised $500,000 and supplied 600 bikes to those remaining on the island, including several family members and personal friends.

“It’s a great honor,” Barea told ThinkProgress, reflecting on his award. “Everybody that helped Puerto Rico out, that helped my foundation out is a part of this.” 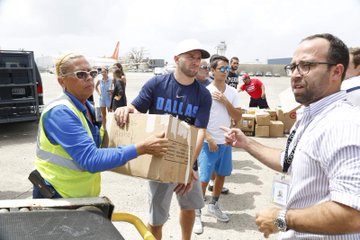 Barea eagerly traveled to meet the community that did so much for those who evacuated to western Massachusetts over the past year.

Holyoke is home to roughly 20,000 Latino families, a majority of whom are Puerto Rican. “We knew when Maria happened that we needed to do something, based on the fact that 50 percent of our city here in Holyoke is Puerto Rican,” said City Councilmember Jossie Valentin before Friday’s assembly.

The community sent 185 care packages and coordinated three relief trips, the most recent one in July. That was the first time Valentin met Barea.

“I was a guest of the mayor of San Juan for the basketball game that was Mexico versus Puerto Rico,” recounted Valentin. Barea tallied 12 points and 11 assists for Puerto Rico in the 84-79 win over Mexico in the FIBA World Cup Qualifiers match. “We were right there on courtside seats and we saw them win.”

Ten days later, Barea was named one of the recipients of the 2018 Human Spirit Award. The Basketball Hall of Fame reached out to Holyoke shortly after the announcement. Paul Lambert, vice president of enshrinement services and community engagement met with Valentin and others to coordinate Barea’s visit.

“Paul convened us together and said, ‘J.J is coming. This event is in Springfield, but we really want to make sure we include Holyoke.’”

Holyoke received numerous evacuated families in the past year.

“We got our numbers the night before last,” said Betty Medina Lichtenstein, executive director of the local non-profit Enlace de Familias. “Through the doors of Enlace, who came in through our doors, was 2,179 people.”

The local non-profit organization, whose name translates to “family link,” was named a temporary relief provider by the Massachusetts Secretary of Health and Human Service last fall.

The staff helped families find housing, jobs, and enroll in school. The work has not been without its challenges. “Across the state of Massachusetts, there are thousands still in hotels. In this area there are 111 and 49 of them are our clients.”

In addition to being displaced, some were unable to find work that met their skill level. “We have a surgeon in this area that is now working as a CNA, a certified nursing assistant –this is a surgeon from Puerto Rico–because there is no reciprocity between their licenses and ours,” shared Lichtenstein.

“And it brings all other types of conversations about Puerto Rico being a colony and our relationship with the United States,” said Vatenlin. “I mean we could talk for hours about that.

“But it’s also a reminder of the fact that we have a lot of work to do and we can do things. Folks that are stateside, we can continue to be advocates and look at the people who are representing us in Washington D.C., who’s stepping up for these folks and who’s not. And I think it’s really shifting things in the conversation.”

Therefore, Friday was just as much of a celebration of Holyoke’s efforts as is was of Barea’s. It was a proud moment for a community still adjusting to the pain caused by the hurricanes. Holyoke has a long road ahead, but the community is ready to face the next challenge, together.

Puerto Rico’s relationship to the United States government has been fractured further after Hurricanes Irma and Maria. Despite this, Holyoke is going to continue to helps its own.

“Massachusetts in general, it is a state that has been very welcoming to people relocating to the state from any country any place. Holyoke also just has a history of really embracing their Puerto Rican colleagues, relatives, and family,” said Holyoke superintendent Steve Zrike.

For Andrea Lubold, there was never a doubt Holyoke would rise to the occasion. “In life we should do things that make other people feel good and that in turn makes us feel good too,” said the teacher Holyoke High School who also grew up in the area.

“Holyoke is a proud city and we’ve always supported our own. That’s just the way we are. Family is family, and that’s how I’ve always looked at it being here.”