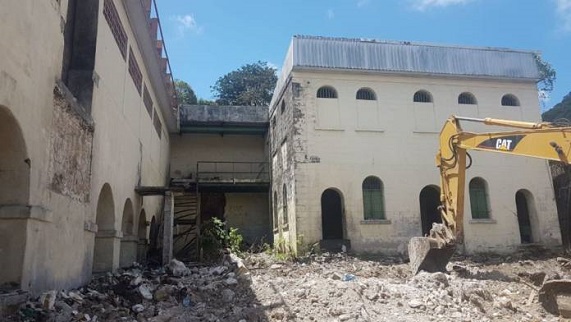 According to Caribbean News Now, the Saint Lucia National Trust (SLNT) obtained an injunction from the Eastern Caribbean Supreme Court preventing the Saint Lucia government and its agents from continuing the demolition of the buildings and burial ground known as the Castries Prison, formerly the Royal Gaol, in Castries, Saint Lucia. The SLNT called on the Development Control Authority to engage heritage conservation organizations in discussions prior to making a decision to demolish and redevelop the Castries Prison.

According to the SLNT plans were being advanced to demolish the historic structure but the Trust had been unable to verify that these works are approved by the Development Control Authority (DCA). The Castries Prison is possibly the oldest structure in Castries and therefore of historic significance. “It tells an important, albeit dark side of our history, but one we should not forget, for to do so will cause us to perpetuate the societal ills its function attempted to address,” the SLNT said. The proposed demolition is part of the Eastern Caribbean Supreme Court Halls of Justice project funded by the Caribbean Development Bank (CDB).

The SLNT called on the DCA to: