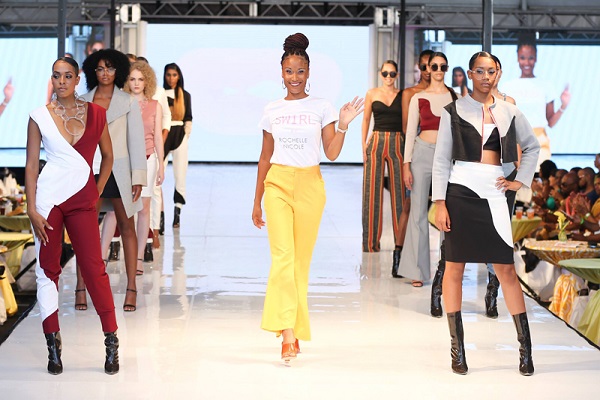 The catwalk dreams of two young Bermudian designers turn to reality at New York Fashion Week. Charda Simons and Rochelle Minors [shown above] were both featured in shows last weekend after they won their spots as a result of their work shown at July’s Bermuda Fashion Festival. Owain Johnston-Barnes (The Royal Gazette) reports:

Ms Simons said the experience was a dream come true. She added: “I’m still on a high. I still feel excited that this happened to me. [. . .] Ms Simons’s Street Lux label was highlighted as part of the Emerging Artists showcase and Ms Minors’s Rochelle Nicole designs were featured in the Prêt-à-Porter show.

Ms Simons arrived in New York on September 2 and, despite an early problem fitting her models with shoes, the show was a success. Ms Simons said: “I was really pleased and I was thrilled to see my own clothes on the runway. “Even before then, I had a few people asking me where they could buy my clothes.” Her next project will be to make duplicate pieces, and organise a pop-up store to open on the island later this year.

Ms Minors added that the opportunity to show her designs at New York Fashion Week was “overwhelming”. She said: “As I watched the TV screen backstage, I was amazed at how great everything looked and in awe about the fact that this was my work, I created it. “I felt like I was on Project Runway, but bigger, and was just honoured that my work is worthy to be showcased at such a high-level event.”

She said her show went well and the crowd, which included friends and family, applauded her work. [. . .] Ms Minors will soon start to design her 2019-20 spring and summer collection and hopes to take her designs to another global stage for Paris Fashion Week.