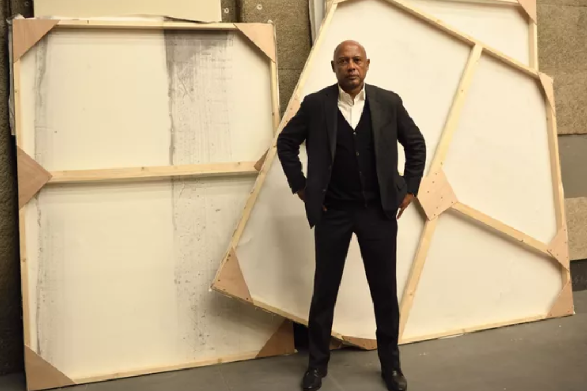 Born in Haiti in 1953, Raoul Peck grew up in the Belgian Congo to flee the Duvalier dictatorship. Director of documentaries and fiction feature films, he worked for ten years on a remarkable documentary, released in France in 2017, I Am Not Your Negro.

Raoul Peck: De Haïti au Congo belge [From Haiti to the Belgian Congo]—“Born in Haiti, Raoul Peck leaves at the age of eight with his parents to live in the Belgian-run Congo. [. . .] Their neighborhood was that of the Haitian community. Since his childhood, Raoul Peck learned other languages and about cultures other than his own. He was a high school student in a Jesuit school in Orléans. These successive adaptations formed a flexible character and made him an insightful observer. His childhood in the Congo, where his parents lived 28 years of their lives, attached Raoul Peck to this country of adoption and to Africa in general.”

Raoul Peck: Berlin, la politique et le cinema [Berlin, politics, and film]—“It was not until his late thirties that Raoul Peck studied film in Berlin. It was indeed out of the question for his parents that he immediately engage in artistic studies. He studied engineering, like his father, and he specialized in economic engineering. West Berlin in the 1980s was home to many exiles from South America, and it was bubbling with political discussions. Raoul Peck followed them closely and participated. This consolidated his cultural and political convictions that he calls “Marxian”—to avoid the pejorative connotation of the adjective “Marxist.” His first film of fiction centered on the theme of Haiti; it was entitled Haïtian Corner. It was shot in New York because the dictatorship rendered it impossible to film in Haiti.”

Raoul Peck: Une ossature marxienne [A Marxian Framework]—In an interview delivered on the occasion of the release of Meurtre à Pacot, a fictional film about Haiti’s devastation after the January 2010 earthquake, Raoul Peck said that his films have a “Marxian framework”; he also says that he had two teachers, James Baldwin and Karl Marx. For Raoul Peck, it is not his intention to trace onto the current world a system and thought elaborated in a very different era from ours, but rather, to be sensitive to the drive for profit in our world. The quest for enrichment at all costs is the theme of several documentaries and fiction by Raoul Peck; his latest film, Le Jeune Marx [The Young Marx], is a fictional film about Marx’s youth and his friendship with Friedrich Engels.

Raoul Peck: Ministre en Haïti [Minister in Haiti]—“Between 1995 and 1997, Raoul Peck is Minister of Culture in Haiti. The president is René Préval, the dictatorship of the Duvaliers and the mandate of Jean-Bertrand Aristide are finally over. Raoul Peck cannot refuse this proposal because, ever since he had fled his island, he wanted to return. He resigned after 18 months in office [. . .].”

Raoul Peck: La renaissance de James Baldwin [The Rebirth of James Baldwin]—“[. . .] This documentary on the struggle against racism in the United States came out in 2016 in the U.S., and in 2017 in France. The film also presents an exceptional portrait of James Baldwin, the United States writer who was committed to black civil rights in his country. The archives make us appreciate his talent as an orator as well as his combative and ironic temperament. I Am Not Your Negro was nominated in the category of best documentary at the Oscars in 2016 [. . .]. Raoul Peck recounts the making of this documentary, for which James Baldwin’s sister provided to him many of Baldwin’s unpublished texts.”

[Translated by Ivette Romero. For podcasts and full articles (in French), see https://www.franceculture.fr/emissions/series/raoul-peck-1