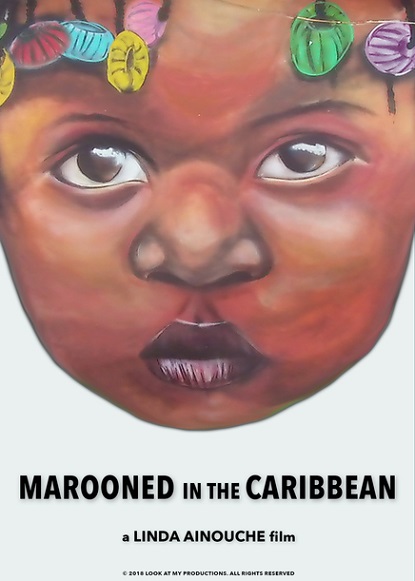 [Many thanks to Leah Rosenberg for bringing this item to our attention.] Counterview (in “Ethnocide in Caribbean island filmed following award winning docufilm on Jamaica’s anti-colonial Indian roots”) presents a new film by Linda Ainouche—Marooned in the Caribbean—on the persecution of Raizal people in San Andrés, Colombia. According to the Social Documentary Network, the poster for the film (shown above) was inspired by graffiti art seen on Southern San Andrés. Having been in San Andrés for a Caribbean Studies Association conference, I was fascinated by the complex history of the island and I look forward to seeing this documentary. Here is information from the Counterview site:

Nobody escapes from blood and thunder in Colombia and, definitely not in the department of the archipelago of San Andres, situated closer to Managua than Bogota.

Marooned in the Caribbean is a project that documents the awful living conditions that Raizal people endure. Sons of slaves, English speaker, mainly Baptist with definite us and customs, these native islanders of San Andres are unmercifully fallen prey to Colombianization—a process which kills their culture through the killing of individual souls and subjugates them to an ethnocide.

Raizal people are excruciatingly persecuted by their government, martyred of the lack of visibility of the predicament they must bear, and so unintendedly, become whipped people for their so-called differences. What’s more unfair?

Nowadays, their abandoned and isolated Caribbean islands to the rest of the world hold the worst of a bunch of miseries (drug, trafficking, gun smuggling, prostitution, robbery, bribery, kidnapping, repression) where inexorably police are thieves in the streets

This project calls awareness that to the reality that Raizal people are fiercely-mistreated whilst their islander identity is ceaselessly perishing.

The San Andres archipelago is inhabited since the 16th century, although it barely exists on geographical maps. Is it because it looks too tiny to be shown, or is it willingly hidden for concerning affairs?
In the mid-1960, the Colombian government initiated a Secret Plan – so it is called – for the archipelago, which has ultimately come to be effectively implemented. The intention was to reduce the Raizal people, their culture, their territory, their rights and identity to nothingness. One of the worst aftereffects of this is, within a couple of decades, the archipelago has become a lucrative touristic destination for the State of Colombia, whilst the Raizal people continue to be abjectly forsaken and dispossessed by their government. As a result, they have today become a minority on their own land.

On November 19, 2012, the Raizal lost a good amount of their territory in the sea, which has been bequeathed to Nicaragua in the aftermath of a trial at the International Court of Justice in The Hague, and one of the justifications for doing it was that the archipelago was uninhabited. The question is, why did the Colombian government allow this? Today, while living on the island, the sea and the soil, the Raizal are fighting a losing battle to preserve their territory.

In 2000, UNESCO declared the San Andrés archipelago a Seaflower biosphere reserve in order to help protect its ecosystems from overexploitation and other direct threats. And yet, nowadays, the coral reef has been fully destroyed, the massive garbage in the sea from tourism is uncontrollable, and coupled with overpopulation on the islands, global warming continues to cause irremediable damages to the environment.

[. . .] “Marooned in the Caribbean” seeks to remind one that the Raizal people are not just images and numbers, but individuals with families, friends, and lived stories of loss, hope and anxiety. It follows some of the themes developed in “Dreadlocks Story”, which became an excellent pedagogical tool for drawing parallels with the Indian indentureship system in the Caribbean, the fight of the Rastafari and the cultural, and the social process that emerged from the atrocious European imperialism.
It articulated the trajectory of cultural, internal and external encounters that prompt an ongoing articulation of the Rasta identity. It was a successful and intriguing addition to the literature and visual discussions of this archetypal community. “Marooned in the Caribbean”, on the other hand, aims at representing the Raizal people as helpless victims in need of more attention, seeking to be turned into an effective, empathetic community of marooned people in the West Caribbean basin against the backdrop of oppressive violence of the administration.