A report by Ben Rabinovich for The Daily Mail.

The second-biggest street-party in the world is just around the corner.

With two million people going to West London for Notting Hill Carnival to celebrate Caribbean culture, diversity and togetherness, only Brazil‘s Rio Carnival is bigger than the London street-party.

Here is all you need to know about Notting Hill Carnival 2018 including when is it, what time does it start, what happens during the Bank Holiday Weekend and how best to get to it.

However, most of the events will take place on the Sunday and Monday.

What time does the Carnival start?

The Carnival will start as early as 6am on Sunday, August 26 and run until 7pm, while on the Bank Holiday Monday the day will start at midday and end at 7pm.

On the Saturday, the Carnival begins at 6pm and carries on until 11pm.

Where is the Carnival? 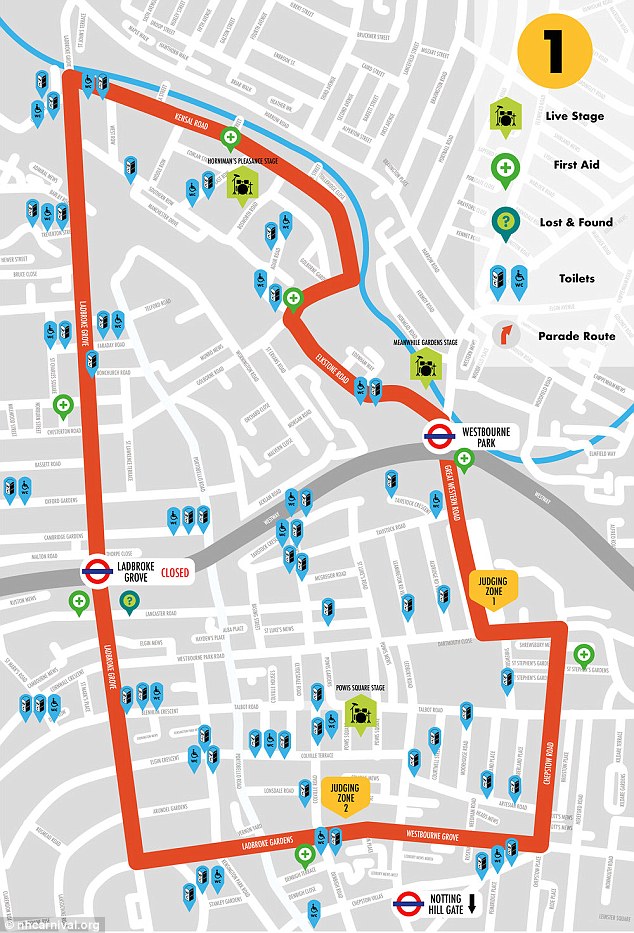 What will happen at the Carnival?

On the Saturday there will be the UK National Panorama Steelband Competition, which will see six steelbands play ten-minute pieces from memory.

The competition was started in 1978 and Ebony Steelband are the current champions. Tickets cost £5 for adults, £1 for under-18s and free for under-5s. They can be purchased here.

Sunday August 26 is officially the Notting Hill Carnival Family Day. The day kicks off at 6am with J’Ouvert, which is a contraction of the French term ‘Jour Ouvert’, which means ‘opening of the day’.

The Carnival starts so early on the Sunday because it is a Caribbean tradition to start it just before sunrise and carrying on all the way until daybreak. Many people go this early to revel in the ‘bacchanal’ spirit of the opening.

The official opening ceremony, which is traditionally conducted by local residents and local government officials, starts at 10am with music and children’s performances, before the mas bands start the parade.

Since August 26 is Family Day, there is a Children’s Day Parade, which encourages children and parents to take part in family-based activities, centred around the main event of children’s mas.

For those preferring something a bit more chaotic, there is the Dutty/Fun Mas all day parade, which will most certainly feature colourful paints and powders being thrown around everywhere. Not one to attend in your nicest gear.

The Sound Systems get the music pumping from midday and runs until 7pm.

There will also be live stages including the Red Bull Music Stage a the Emsie Horniman’s Pleasance Park and Casa Bacardi in Powis Square. 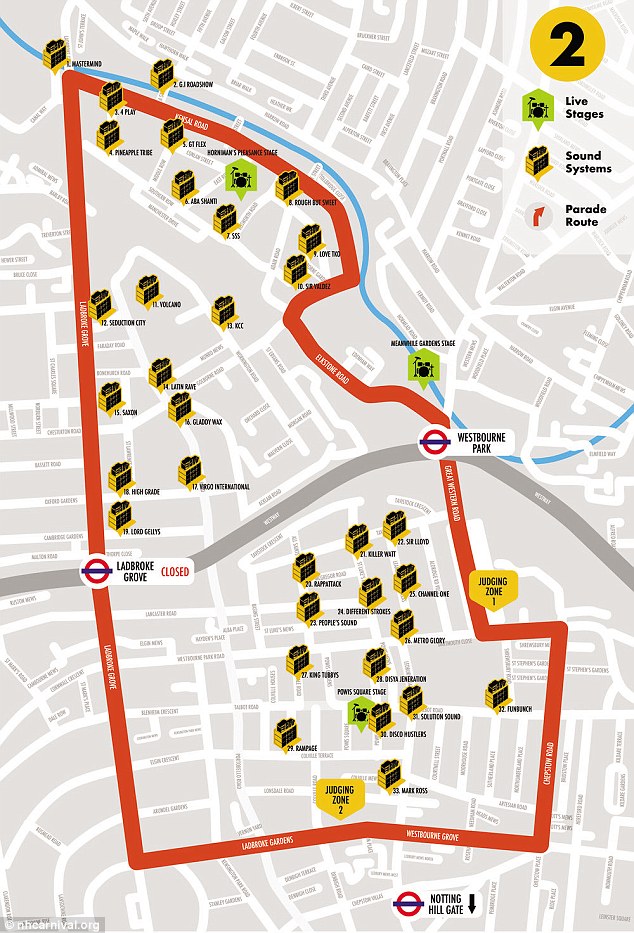 Bank Holiday Monday is when the Carnival reaches its climax, featuring an all day parade, sound systems and more performances on the Casa Bacardi Stage and the Wilk Walker Community Stage.

Getting to Notting Hill Carnival

During the Carnival Kensal Road and many roads going north from Notting Hill Gate to Harrow road will be closed, as will most roads from Latimer Road, St. Mark’s Road and Clarendon Road in the east to Porchester Road, and Queensway in the West.

Notting Hill Gate, Ladbroke Grove and Westbourne Park tube stations will be incredibly busy during the Carnival, so it is advisable to avoid them during peak hours of the Carnival and instead going to stations slightly further out like High Street Kensington and Lancaster Gate.

What to wear to the Carnival

People normally wear bright colours, feathers and clothes they don’t mind getting messy. Although, as the sun sets it’s advisable to have an extra layer when it gets cold.

What to bring to the Carnival

Depending on the weather, the Carnival organisers recommend bring plenty of water and an umbrella.

Food and drink at the Carnival

There will be plenty of food and drink stalls selling staple Caribbean dishes such as jerk chicken, Roti, rice ‘n’ peas and corn on the cob.