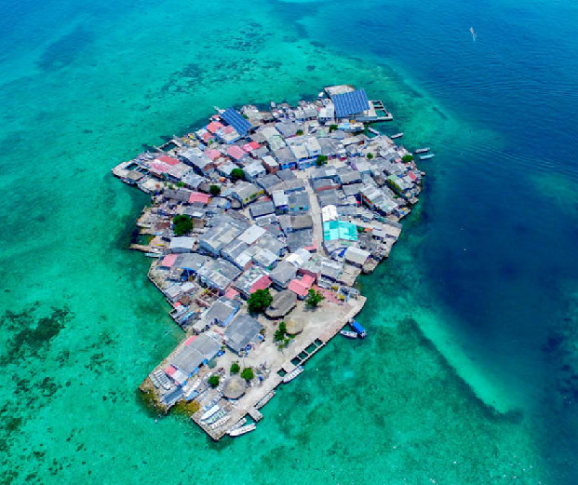 Many thanks to Peter Jordens for bringing this article on Santa Cruz del Islote to our attention. [Also see previous, related posts below.] Lucy Sherriff (CNN) reports:

From a distance, it’s hard at first to determine what Santa Cruz del Islote actually is. Rising from the sea, the island — one of the most densely populated in the world — appears to be floating. In fact, Santa Cruz — located in Colombia‘s San Bernardo Archipelago in the Gulf of Morrosquillo — sits on a combination of raised sea bed and coral. It’s one of 10 islands in the archipelago.

Legend has it that fishermen from the nearby islands spent the night on Santa Cruz and decided to stay there permanently when they realized there were no mosquitoes. Locals attribute the mosquito-free environment to the absence of mangroves and beaches.

Santa Cruz isn’t a traditional island retreat. There’s nowhere for visitors to stay. Tourists often spend the night at the neighboring Punta Faro hotel on Múcura Island, and travel to Santa Cruz by speed boat to explore for a few hours. It’s like stepping into a Gabriel García Márquez novel. Santa Cruz features a dreamlike, innocent way of life (there are no police on the island), and the colorful houses are passed down through generations, so there are no non-native residents.

Some estimates put about 1,200 inhabitants on the tiny island that’s about the size of two soccer fields. But some say the community is smaller. Juve Nal, a sexagenarian who has lived on Santa Cruz his whole life, says it is more like 900. “We get annoyed because the media always say the island is more crowded than it is,” grumbles Nal, who seems to act as community leader, tour guide and spokesperson all rolled into one.

Whatever the population (which is unknown as no census has been carried out for decades), Santa Cruz is a tight squeeze. About 115 houses are crammed higgledy-piggledy on top of one another, while elderly men with kind eyes and weathered faces sit out on their chairs sipping beer, teenage boys line the streets nodding their heads and swaying to champeta beats and young mothers chatter away at corner shops.

Nal dips and dives in and out of the winding alleys, ducking under washing lines and pointing out the various amenities of the island — a church here, a school there — and waxes lyrical about the peaceful, relaxed way of life. “There is no crime here,” he says, beaming proudly. “We have no police and we do not need them either.” He stops by a small square, marked by a large white cross. It’s a good place for a photo op, he explains, as this cross gives the island its name.

A recent partnership with Hotel Punta Faro has resulted in the establishment of a small conservation aquarium on Santa Cruz. Previously locals treated turtles the same way they would a chicken, killing them for meat. Now, they carefully untangle the turtles caught in their fishing nets, and look after them until the hotel’s conservation team comes to collect them.

Tourists can pay a small fee to enter the aquarium, which also houses small sharks, stingrays and fish. [. . .]