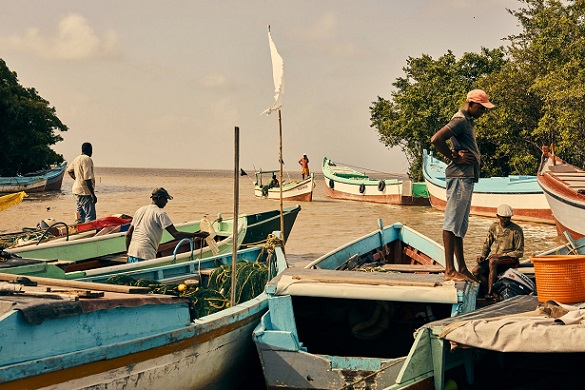 Energy business correspondent Clifford Krauss writes about Guyana and its future as the setting for the world’s next big oil boom. He wonders whether “This largely underdeveloped country on South America’s northern Atlantic coast” is ready “to handle the riches.” Here are excerpts; see full article at The New York Times.

Guyana is a vast, watery wilderness with only three paved highways. There are a few dirt roads between villages that sit on stilts along rivers snaking through the rain forest. Children in remote areas go to school in dugout canoes, and play naked in the muggy heat. Hugging the coast are musty clapboard towns like Georgetown, the capital, which seems forgotten by time, honeycombed with canals first built by Dutch settlers and African slaves. The power grid is so unreliable that blackouts are a regular plague in the cities, while in much of the countryside there is no electricity at all.

Such is the unlikely setting for the world’s next big oil boom.

In the last three years, ExxonMobil has drilled eight gushing discovery wells offshore. With the potential to generate nearly $20 billion in oil revenue annually by the end of the next decade, roughly equivalent to the revenues of the much-larger Colombia, there could be enough bounty to lift the lives of almost every Guyanese.

If all goes well, one of the poorest countries in South America could become one of the wealthiest. Suddenly the talk of Georgetown is a proposed sovereign wealth fund to manage all the money, as if this were a Persian Gulf sheikhdom.

But there are obstacles. If history is any guide, countries that discover oil often waste their opportunity, as the resource blends seamlessly with corruption. Countries with weak political institutions like Guyana are especially vulnerable. [. . .]

Senior government officials here have little experience regulating a big oil industry or negotiating with international companies. The civil service is corrupt, and the private sector is slow to innovate, businessmen and aides to senior officials acknowledge.

Still, there is cautious optimism. “We see this oil discovery as almost like providence,” said Raphael Trotman, the natural resources minister. “We’ve been given a second chance to get things right.”

[. . .] The Guyanese government, under its agreement with Exxon, will receive roughly half the cash flow from oil production once the company’s costs are repaid. Economists say that will mean the country’s current gross domestic product of $3.6 billion will at least triple in five years. But with exploration out of sight 120 miles offshore, and no refinery planned, the economic benefits for the population have been limited so far, making some cynical. Only about 600 Guyanese have found direct employment on the drill rigs, shore bases and offices, and that number may increase only to about 1,000, oil executives say.  “When we have big projects, we hire foreign companies who bring their own workers,” said Khemraj Dhaneshrie, a young chemist at the Leonora estate sugar mill.

Mr. Dhaneshrie is typically skeptical about his government’s ability to oversee foreign operations after Guyana’s long experience of opportunistic Chinese investment. He noted that the Chinese financed and built an enormous factory in 2009 to rescue the sugar industry, but it turned out to be a $181 million boondoggle. “The Chinese cut down our forest, dug out our gold, and we never got a cent,” he said. “We could end up with the same experience with ExxonMobil.’’

In the Past, Wasted Opportunities

Colorful Hindu monuments tower over Guyana’s rice fields, a reminder of the cultural distance between the country and its Latin American neighbors. It is English speaking because of the legacy of British rule, and its two biggest ethnic groups are Afro-Guyanese and Indo-Guyanese — the descendants of slaves from Africa and of indentured servants brought from the Indian subcontinent in the 19th century.

Until now, the country had never produced oil, and traditionally it has traded its rice crop for fuel from Venezuela. Now it is attracting experienced Texas oilmen like Doug McGehee, Exxon’s Guyana operations manager. Over the last 37 years working for ExxonMobil, Mr. McGehee has taken his black cowboy boots, silver belt buckle and Texas A&M class ring into the oil fields of Angola, Kazakhstan and Equatorial Guinea. In all those places, oil wealth has risen to the top, only to leave the poor behind. Last year, for example, a Paris criminal court convicted the vice president of Equatorial Guinea of money-laundering and embezzling more than $100 million.

But as Mr. McGehee monitored operations aboard the Noble Bob Douglas drill ship on a recent day, he insisted that Guyana could be different. “The math is right here,” he said, noting that the country has a tiny population — below 800,000 — to share all the new wealth. Guyana’s government stands to take in more than $6 billion in royalties and taxes annually by the end of the 2020s, according to the Norwegian consultancy Rystad Energy.  “If the government manages the resource right, every Guyanese should benefit with better schools, better health facilities, better roads,” Mr. McGehee said. That is no small “if.”

Guyanese need look no further than neighboring Venezuela to see a failed state where the world’s largest oil reserves have not prevented hunger, shortages of medicine and hyperinflation from producing widespread misery. Nearby Trinidad and Tobago offers another example of how countries dependent on oil can neglect traditional industries and then suffer severe economic shocks when crude and natural gas prices fall.

Scholars call the syndrome the “resource curse.” Others warn of the “Dutch disease,” a phenomenon so labeled in the 1970s after a natural gas boom sapped the strength of manufacturing in the Netherlands. Nations that contract the disease from a sudden influx of mineral money typically suffer a surge of inflation, while labor from farming and other traditional professions is drawn to the higher-paying oil sector. Thus, wealth becomes more concentrated. [. . .]

Many of the changes have been promoted by Jan Mangal, Mr. Granger’s personal petroleum adviser and brother of Lars Mangal, the businessman. Jan Mangal, a Guyanese-born former Chevron project manager, has advised the president to put a hold on new leasing until the petroleum commission can be established with new personnel and has called for an investigation of several oil-exploration concessions made by the previous government to small oil companies.

“I see a lot of red flags,” said Mr. Mangal, who shuttles between Guyana and his home in Houston. “We cannot allow the Guyanese industry to be built around this shabby foundation of corruption.” [. . .]

One thought on “The $20 Billion Question for Guyana”