A report by Madhvi Mavadiya for the Daily Mail.

Dee-Ann Kentish-Rogers made history after becoming the first black woman to be crowned Miss Universe Great Britain and will represent her native country Anguila and the United Kingdom at the International Miss Universe competition.

After competing in Newport, Wales, against 40 other women from England, Northern Ireland, Scotland, Wales and British overseas territories, Dee-Ann Kentish-Rogers will travel to the Philippines to be in with a chance of being crowned Miss Universe in December.

‘It’s really humbling and I think it’s also a privilege for me to become the first black woman who is crowned Miss Universe Great Britain.

‘I believe that this is the direction that the pageant has been going in for the last couple of years because Britain is a diverse nation, we are a multicultural society and it is time that diversity is seen on a stage where other young black girls and girls of all ethnicities can see that this is something for everybody not just some of us,’ she said.

Dee-Ann Kentish-Rogers, hailing from Anguilla, is a competitive athlete and won a silver medal in heptathlon in the Central American and Caribbean Games, in addition to a bronze medal in the CARIFTA Games.

Before winning the Miss Anguilla competition, speaking to Pageants News, Rogers revealed that she ‘used to be a heptathlon athlete and was required to participate in seven different track and field events over the course of two days.

‘For me to be successful at each event, I had to discipline myself to wake up early for training, follow a rigid diet, hold myself accountable, balance university and condition my mind to take each event one at a time on competition day focusing on my performance and execution in that moment,’ she said.

Dee-Ann discussed how despite her childhood and early adult life was consumed by sports, especially track and field, football and volleyball, after sustaining a knee injury at a heptathlon event at the Commonwealth Games in 2014, she had to retire from running and turned to pageantry. 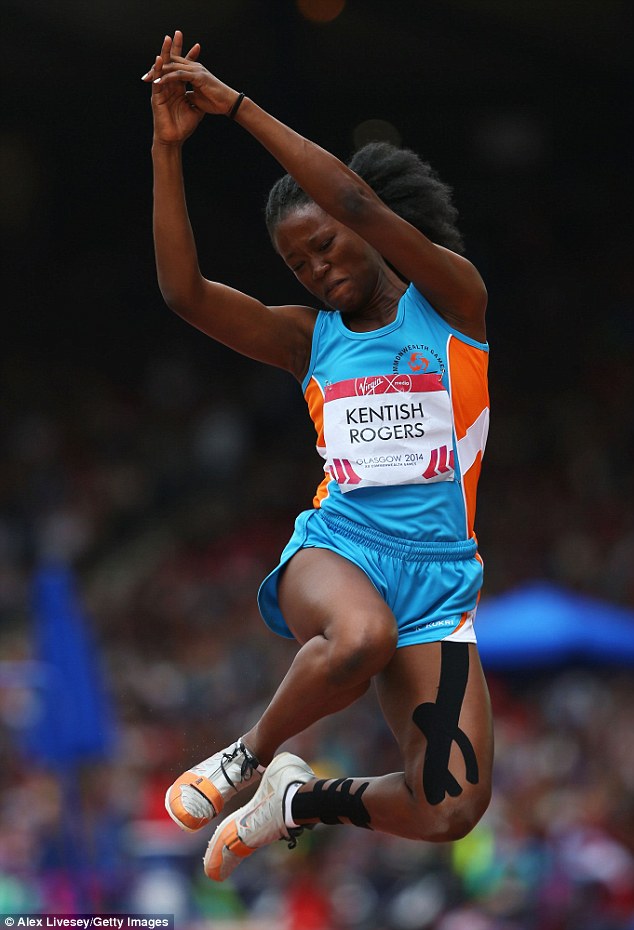 This was the direction that she took because she envisioned that she would meet other ambitious, driven people, be able to reveal her inner beauty and test her fortitude in this environment. She also revealed that she decided to change her social media profiles from private to public.

‘When I joined social media, I promised myself one thing: not to get carried away with all of the filters etc. My profiles all reflect who I am; my views on feminism, the importance of family and friends and bonding with them, what I like to do in my spare time and my sense of style.

‘I think my profiles work to my advantage simply because they show who I really am and people can identify with that.’ She also said that to her knowledge, she is ‘the first dreadlocked woman to walk across a Miss Universe Great Britain stage and that is absolutely most exciting to me.’

Dee-Ann also intends on representing women in sports and raise the profile of those in this field to gain more sponsorship and media coverage. ‘I am also very passionate about seeing equal pay opportunities for women in sports. This is where I want to make a difference.’

She also recently passed her bar examinations from The University of Birmingham law school and will be formally called to the bar later this month. Kentish-Rogers referred to both of her career paths as complimentary, as reported on Buzzfeed.

Dee-Ann Kentish-Rogers was crowned Miss Universe Great Britain 2018 in Newport, Wales at the Riverfront Theatre and Arts Centre on Saturday, July 14, beating 40 other women to be able to represent the country at the Miss Universe pageant.

After becoming the first black woman to be given this accolade, Kentish-Rogers said that ‘It really hasn’t sunk in – it feels a bit surreal, I feel like I’m walking on an invisible cloud right now, I’m really buzzing.

Not to be confused with Miss United Kingdom or Miss Great Britain, which are different competitions, this pageant selects who will go on to represent Great Britain at the Miss Universe contest – which garnered attention after Steve Harvey called out the wrong winner in 2015.

In a statement to BuzzFeed, Paula Abbandonato, who is the national director for Miss Universe Great Britain said: ‘I am absolutely delighted that Dee-Ann has won the title this year.

‘I took over this role in 2008 and I can honestly say there is no better gift then having our first black winner to celebrate 10 years in the job.

‘Dee-Ann is a true role model for all women of all skin colours and with her dynamism off the stage, coupled with her presence on the stage, I genuinely believe Great Britain has a chance at the Miss Universe crown this year.’

Although the official date has not been announced, the Miss Universe pageant will be held in December 2018 and will see Demi-Leigh Nel-Peters of South Africa will crown her successor at the end of the event.