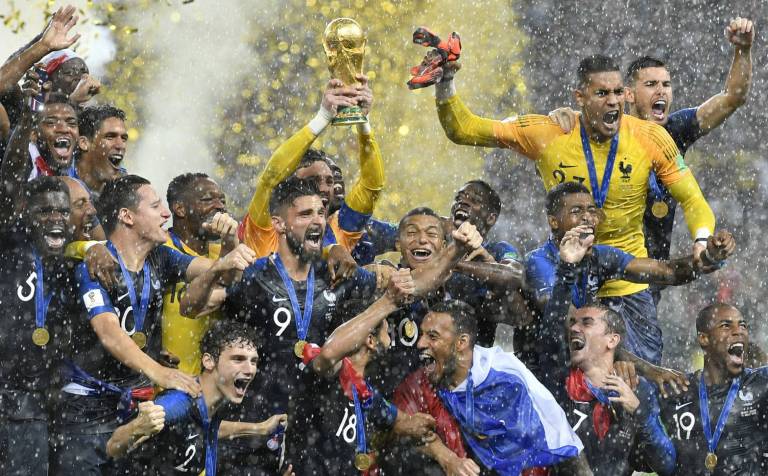 An article by Annette Joseph-Gabriel for Africa Is a Country.

The symbols associated with France’s advance to the World Cup final have followed a familiar formula: the singing of Marseillaise and police breaking up over exuberant celebrations at the Champs Élysées. As for the players, their post-match celebrations however, are not what some would consider traditionally French. The victory playlist is Martinican zouk and Haitian kompa, a reminder that French can mean many things. In a viral video doing the rounds, Presnel Kimpembe, whose mother is from Haiti, organizes the music. Apart from Kimpembe, two other players in the 2018 World Cup squad, have strong connections to the French Caribbean. Thomas Lemar was born in Guadeloupe and Raphael Varane’s (he scored the team’s first goal in the quarterfinal game against Uruguay) father is from Martinique. A long line of French national team players–Liliam Thuram and Thierry Henry, among them, have connections to French “overseas possessions” in the Caribbean. Thuram was born in Guadeloupe, while Henry’s mother is from Martinique and his father from Guadeloupe.

The result is that the French team today is as multicultural as it was when France won its first and only World Cup twenty years ago. Over half of the players have roots in the Caribbean and Africa. Much ink was spilled in 1998 about the so-called rainbow team, and much ink will be spilled again in the coming months about what the 2018 team’s diversity means for race and national identity in France. French President, Emanuel Macron, struggling to shed his image as an elitist president, will no doubt seek to ride the wave of the revival of “black, blanc, beur” to higher popularity in the polls.

But the political effects of the French team’s diversity are not only contained within the borders of the Hexagon, as mainland France is known. They reverberate across the ocean, in Africa and the French Caribbean. The debates about race and citizenship are not only happening in the French cities that many of the players call home. They are just as crucial in the Caribbean islands where some of them have roots. So, what would a World Cup victory mean on an island like Martinique that often registers in the French imaginary as no more than a vacation destination, but whose inhabitants hold French citizenship?

Here in Martinique, on the eve of the World Cup final, the euphoria about a possible French victory hovers like a thin layer of hope that barely veils the simmering anger at France’s neglect of the island and pessimism about the future. The high cost of living has been an ongoing reality that exploded in a 44-day strike in January 2009. Prices of basic goods remain high, but the palpable anger and disenchantment goes beyond the cost of living. There is something in the air. Or more precisely, there is something in the water and in the soil.

In 2007, two Martinican public figures, Louis Boutrin and Raphaël Confiant, broke the news of an incredible scandal in the French Caribbean. Their book, Chronicle of a Poisoning Foretold: The Scandal of Chlordecone in the French Antilles, 1972-2002, charged that Martinique’s and Guadeloupe’s soil and water had been poisoned by the pesticide chlordecone used on banana plantations. France had permitted the continued use of a toxic pesticide in the Caribbean over two decades after its interdiction in France.

The report sent a shockwave throughout the islands. A flurry of medical tests and studies by government bodies, journalists and independent organizations revealed the potential links between the contamination and the startling statistic that the small island of Martinique today has the highest rate of prostate cancer in the world. The court case to determine responsibility has dragged on for 12 years and is still ongoing. Recent journalistic exposés have brought the problem of choloredecone poisoning back into the spotlight this year. They are a reminder that the pesticide is still ever present. It will take centuries for the molecule to decompose on its own. For many Martinicans, the fact that for decades France allowed the use of a banned toxic substance in the Caribbean is further evidence of the continued devaluing of French citizenship in the overseas departments.

The anger and frustration over the chlordecone situation has been compounded by ecological problems in an increasingly warmer climate. Since 2011, unprecedented quantities of Sargassum, a brown seaweed, have washed up on Caribbean beaches. Many of the beautiful white sand beaches that draw tourists to Martinique in the summer months are now covered in layers of brown algae that emit a noxious gas. Coastal inhabitants have reported headaches, vomiting and diarrhea. Schools in the worst hit areas like the town of Robert recently had to be evacuated.

Living with the effects of a seaweed invasion for a summer can range anywhere from unpleasant to irritating to dangerous. But as with the chlordecone poisoning, the long, interminable period of politicians’ hand-wringing and inaction exacerbates the problem. Seven years is a long time to wait for something, anything to happen. Conversations about the Sargassum invasion these days inevitably end with someone expressing the hope that the seaweed will end up on the beaches of Miami. “If this happens in America someone will finally take action” they tell me. “No one listens to us. No one cares about us.”

Poisoned water and invasive seaweed have nothing to do with soccer. Except that they do when French Antilleans have a significant presence on the national team but relatively less political agency. So, what would a World Cup win mean for French Antilleans who inhabit a double location between French political citizenship and Caribbean cultural identity, between the euphoria of possibly being world champions, and the anger at being neglected as, in the words of Martinican psychiatrist Frantz Fanon, the wretched of the earth?

It might mean a temporary period of elation, a reprieve from the frustration of being treated like second-class citizens. It will mean several days of celebration with zouk and kompa blaring not only from the speakers of the soccer team’s bus in Russia but also from the cars and houses of their compatriots in the Caribbean. But it will also be a reminder that the ghosts of France’s colonial past continue to haunt not only the inner cities of Paris but also the Caribbean islands. Underneath the victory songs will be the rumblings of discontent that may very well be the chronicle of a social revolution foretold.