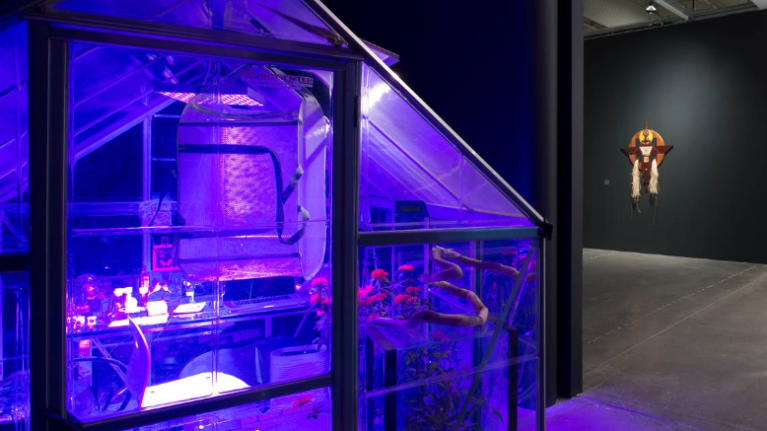 A review by George Fishman for the Miami Herald.

Risa Puleo’s term as a curator-in-residence at the Bemis Center for Contemporary Arts in Omaha, Nebraska, came as the 2016 presidential campaign was aflame. Protesters in the area were raging against the Dakota pipeline; farther south, the idea of a Mexican border wall was drawing ire. That furor spurred the Texas native’s determination to explore firsthand the cultural landscape in this region of the country.

Working outward from her Omaha base at the Bemis Center for Contemporary Arts, Puleo drew together works by three dozen regional artists — principally of Native American and Hispanic heritage — and created in response to contemporary events. The result is the show “Monarchs: Brown and Native Contemporary Artists in the Path of the Butterfly,” now installed at the Museum of Contemporary Art in North Miami. Seven of the artists in the show live in the Miami area.

“‘Monarchs’ themes of labor, displacement, identity, transformation and ecology made a natural fit for South Florida — and for today,” said Chana Sheldon, director of MOCA since January. The exhibition categories of “Resilience,” “Migration,” “Inheritance,” “Archives and Future” resonate soundly with our region’s Caribbean and Hispanic heritage.

But don’t worry that you’ll feel besieged with political rants. As Sheldon says, “One of the successful parts of the show is that it is not overly didactic.” Most of the comments on dislocation, oppression, discrimination — even rape — are poetically insinuated.

As the only butterfly that migrates both north and south — from Canada to Mexico and back — the monarch creates a literal framework for the show; most of the artists whose work is included live along the flight path. It is also a metaphor; it can take up to five generations for Monarch butterflies to complete their migratory journey, akin to the generational transition from immigration to assimilation.

Some artists focused on the butterfly itself. Dominican-born Franky Cruz, who lives in Miami, is growing milkweed — the Monarch caterpillar’s host plant — and sharing the butterfly’s life cycle in a small greenhouse/performance lab. Here, caterpillars outgrow their skins and form chrysalises, then dramatically transform from primitive “eating machines” into “complex creatures that go from consuming the plant to flying around, mating, having territory, migrating from Canada to Mexico,” Cruz says.

We humans might take a hint, he suggests. Instead of consuming the entire planet, “Maybe we could just drink the nectar.”

In a nod to the artistic technique of pouring paint on canvas, Cruz suspends chrysalises above watercolor paper. As butterflies emerge, they release fluid that splatters on the paper, staining it with rust and yellow.

Dinizulu Gene Tinnie’s “Metamorphosis” centers on a white fossilized moth crafted in multi-toned wooden shapes and elegant metal inlays. The work was inspired by the artist’s vision of his mother’s death as a liberation. During a gallery talk, Tinnie explains that we metaphorically spin our cocoons with our actions. As we age, our cocoon becomes brittle and, “it finally releases us, and what we call death is really our transformation into the being we were born to be in the first place.” Tinnie, who’s an African American and Native American scholar and activist, has festooned his sculpture with raffia, much like a Zulu African Dance Mask.

Texas-based Margarita Cabrera, who is Mexican American, presents a swarm of collaboratively produced copper butterflies that “float” above the gallery space. The work symbolizes the Monarchs’ remarkable multi-generational trans-American journey and recalls the movements of humankind that preceded national boundaries — and our current border crisis. The artist recruited artisans from Michoacán, Mexico — where the annual Monarch migration dramatically terminates — to form a kind of cross-border maquiladora (manufacturing facility).

Humor sometimes disguises outrage. Native-American artists Cannupa Hanska Luger and Marty Two Bulls Jr., who are based in New Mexico, created a jumble of ceramic beer cans, bottles and guns. Faux bullet holes, cigars and cigarettes suggest a drunken party’s aftermath and allude to the crisis of alcoholism and violence on reservations.

Truman Lowe, a Native-American sculptor living in Wisconsin, uses simple pine slats to convincingly suggest a waterfall sluicing out of the blue wall on which it’s mounted. His craft and sensibilities flow from his parents’ basket-making, and he has transferred their tradition-based skills and vision to a streamlined contemporary approach to making sculpture.

Several of the show’s works mix the metals sought by European colonists with the handmade goods associated with indigenous peoples. Others use materials of drywall, vinyl tile, burlap, stucco, wooden staves, Mylar and ceramics — an homage to the U.S. construction jobs that so many Mexicans fill today.

Miami-based Yanira Collado turns instead to textiles. An Afro Latina from the Dominican Republic, in a gallery talk she said, “I was drawing with textiles and string before I ever touched paint or drawing materials.” Her “Cuesta Abajo/Untitled” is an array of printed quilting blocks, whose north star imagery — accented with colorful fabric overlays — derives from Sioux tribal designs. Incorporated into quilts, the motif was used within the Underground Railroad to signal support for enslaved people’s escape.

Other South Florida artists explore pasts both personal and historic.

Onajide Shabaka’s heritage, like that of many African Americans, is complex. “Total Disappearance, 1905” from MOCA’s permanent collection, hearkens to his family’s 19th century roots as former slaves, amidst the wetlands and historical founding of St. Lucie County. His one-minute sepia-toned video recounts the specific court testimony by his grandmother, Minnie Daniels, and another resident of Ft. Pierce of a mysterious vision of a naked woman, appearing and disappearing into the swamp’s “murky waters.”

Peruvian-born William Cordova’s work is often deceptively simple. Each sculpture in this series features feathers — an overt Native American trope. But in “Geronimo I” he has hidden a brick within an overturned paper bag that also contains a copy of Sun Tzu’s “The Art of War.” Bricks can be used in combat — or for building.

Rick Ulysee’s suite of small works on graph paper includes diagrammatic drawings that abstractly reference paths of travel — his own immigration from Haiti and the perilous journey of shamefully termed “boat people.” He also presents miniature color field paintings and photos. Kin to many other works in the exhibition, these pieces bear strong personal associations. Some were created during emotionally charged visits to his homeland. For example, the Polaroid of a breadfruit tree alludes to his grandmother’s “bread of life” role. Her church is decorated with blue and orange banners, boldly represented in adjacent watercolors.