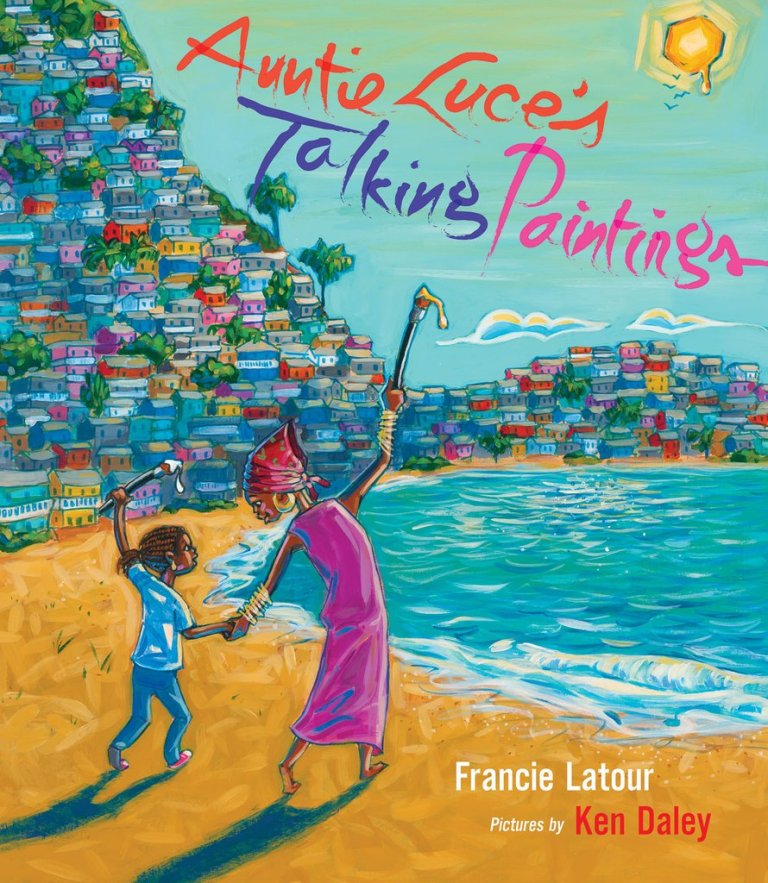 Every winter, a young girl flies to Haiti to visit her Auntie Luce, a painter.

The moment she steps off the plane, she feels a wall of heat, and familiar sights soon follow — the boys selling water ice by the pink cathedral, the tap tap buses in the busy streets, the fog and steep winding road to her aunt’s home in the mountains.

The girl has always loved Auntie Luce’s paintings — the houses tucked into the hillside, colorful fishing boats by the water, heroes who fought for and won the country’s independence. Through Haiti’s colors, the girl comes to understand this place her family calls home. And when the moment finally comes to have her own portrait painted for the first time, she begins to see herself in a new way, tracing her own history and identity through her aunt’s brush.

Includes an author’s note and a glossary.

Francie Latour is a prize-winning writer whose work explores issues of race, culture and identity. Her work has been featured on National Public Radio and the Today show, as well as in The Root, Essence and the Boston Globe. Her writing was also anthologized in The Butterfly’s Way, edited by Edwidge Danticat. Francie is co-founder of Wee The People, a social justice project for kids. This is her first picture book.

A mother of three, Francie was born to Haitian parents. She was inspired to write Auntie Luce by a chance encounter in 1992 with the late artist Luce Turnier — one of Haiti’s most celebrated female artists — who painted Francie’s portrait. Francie and her family live in Boston.

Ken Daley was born in Canada to parents who emigrated from Dominica, and his illustrations for this book are inspired by his African Caribbean roots. Ken has also illustrated Joseph’s Big Ride by Terry Farish, an Ontario Library Association Best Bet. He has exhibited his art in Canada, the US and the Caribbean, and his work can be found in numerous private collections. He divides his time between Cambridge, Ontario, and Providence, Rhode Island.