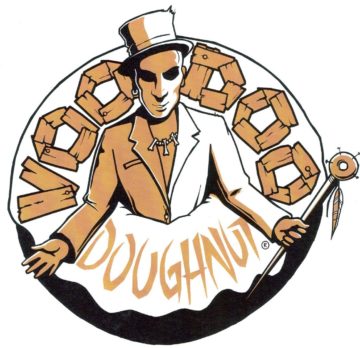 A report by Heather Greene for The Wild Hunt.

The Portland-based doughnut company Voodoo Doughnuts announced earlier this year that it was expanding its brand to Orlando, Florida and would be offering its unique take on doughnuts at the Universal Studios theme park. Its regular doughnut offerings have names such as Voodoo Doll, Memphis Mafia, Gay Bar, and Cock-N-Balls. They also serve the ubiquitous powdered sugar cake doughnut as well.

The store opened last week with limited hours, and will hold its grand opening sometime this spring.

Voodoo Doughnuts is the brainchild of Kenneth “Cat Daddy” Pogson and Tres Shannon. According to their site, the two were friends and wanted to start a business that would “fit into an extraordinary Portland Oregon business climate. Something fun, different, and one for the ages.” They set up in an area of the city called Old Town in 2003.

Since its opening, the doughnut store has become a Portland fixture and is popular with both locals and tourists. It has expanded beyond Old Town to other locations in Portland and Eugene in Oregon, Denver, Colorado, to Austin, Texas, Hollywood, and now, to Orlando.

Its popularity is partly due to Pogson and Shannon’s nontraditional marketing approach, which fits a cultural trend that has popularized magic, conjuring, and occult practices. That fact, combined with humor, double entendres, sexual innuendo, and kitschy product names, give the doughnut shop a contemporary and attractive edge.

What other doughnut shop has an underwear line and a recording label?

One question that often pops up is whether or not the owners have any spiritual connection to Voodoo or other magical practice or system. According to the website, Pogson and Shannon flew in “some Voodoo oil from down south” to build their doughnut empire. However that is the only such reference and provides little evidence.

While the stores, the marketing campaign, and website are all bathed in Voodoo iconography, much of that is mainstream bias. This includes the Voodoo doll and pentacle doughnuts, the use of the words like magic, and the New Orleans-inspired imagery of a conjure man.

TWH reached out to the store but did not receive a response in time for publication.

Pogson and Shannon’a project is the first mainstream food and beverage company to capitalize on conjure craft, magic or a related minority religion to propel its product marketing. Magic and the like has a cache in mainstream society that is both repulsive and alluring, neither existing totally without the other. The success is based on the attraction to a sexiness or strength in something potentially dangerous and traditionally forbidden and allowed to exist only in the shadows. This is the essence behind such campaigns; respect for any serious or sacred practice is more or less irrelevant.

Many breweries, for example, flirt with witchcraft-inspired labels, such as the Wychwood Brewery in England. In 2010, Lost Abbey microbrewery in California received backlash for artwork that depicted a witch being burned at the stake. The beer was named Witch’s Wit. There is a Voodoo Brewery in Pennsylvania, and the New Belgium Brewery makes several beers with that name. In That is to only name a few.

The doughnut shop is far from original in that regard.

While most people recognize the usage of such terms in marketing as being fun and eclectic, it remains a type of commodification of a religious practice through its popular iconography. Voodoo is a religious practice and spiritual path with real people and genuine sacred principles. Does it matter that these companies are using Voodoo (or Witchcraft or even Norse mythology in some cases) completely devoid of religious centers, to promote the sale of food and beverage products? Can it be just fun and games, or is it problematic?

TWH asked a number of people who practice Voodoo and Vodou that very question. Not all our interviewees were able to respond in time for publication, but those that did expressed their concerns.

Mambo T Chita Tann, who lives in the store’s hometown, has been a mambo asogwe of Haitian Vodou since 2001. She is a teacher, a priestess, and author. Mambo T, as she is known, first pointed out that there is s difference between Haitian Vodou and New Orleans Voodoo, and that the store seems to be playing off more with the New Orleans iconography. However, she said that the Portland stores do contain some Haitian art, so the distinction is not being made clear.

“That being said,” Mambo T continued, it is “very clear that the Voodoo here is the Hollywood trope of Voodoo, complete with doughnut-dolls. It may be in poor taste, but so are stores with themes that borrow from other religions or cultural groups. Haitian Vodou has been vilified so long by these various tropes that I’m not particularly concerned about a doughnut shop adding anything more to the problem, [b]ut like various other Americana kitsch related to Native Americans and African Americans, it does nothing to help.”

She doesn’t believe that Voodoo Doughnuts would endanger the religion itself, which has millions of followers worldwide. “[The store] looks more like a tie-dyed Portlandia rock t-shirt emporium, and the vast majority of the doughnuts are named for sex acts (which is also a trendy hipster thing here in PDX),” she said.

However, her main concern was the perpetuation of stereotypes. She said that the continued use of the New Orleans Voodoo trope not the religion, as she said, “is detrimental and speaks to the continued lampooning of people of color in that city as being superstitious primitives. In that light, this sort of thing isn’t good wherever it happens, whether that’s in a doughnut shop in Portland or in a tourist shop in the French Quarter.”

Lilith Dorsey, who is a New Orleans Voodoo priestess based in New York City, as well as an author, teacher, and blogger at Voodoo Universe, agreed. She said, “Commodification and appropriation of Voodoo is a difficult problem, and one that seems to happen a lot these days. In the specific case of Voodoo Doughnuts, while the merchandise looks tasty (I have not tried them,) much of the brand image surrounding them only perpetuates stereotypes, as opposed to educating people about an ancient religion.”

While Dorsey did not suggest a boycott or protest, she does have a question for the doughnut shop owners. She said, “While [education] may not be the focus of a doughnut company, education is my focus and one I have dedicated my life to. From that vantage point I would respectfully ask what is your goal in perpetuating these images, such as voodoo dolls and the like?”

Photographer and artist Allan Spiers, who is also known as Docteur Caeli D’Anto, is an initiate of Hatian Vodou and lives in the Chicago area. He runs an online site, the Vodou Store. He agrees with Dorsey and Mambo T. “While I don’t have a profound problem with this it does bother me as a concept. It seems like the religions that are not under the Abrahamic umbrella are free game to Westerners to exploit, particularly in regard to their stereotypical imagery,” Spiers said.

“It is as if the West has absolutely zero respect for other religions,” he continued. “Why don’t we ever see things like ‘Catholic Doughnuts’, or ‘Baptist Doughnuts’ with silly caricatures representing these religions?”

However, that exact issue has now become a reality in Canada. A Toronto-based ice cream store named Sweet Jesus is provoking protest in Canada and the U.S., as it announces its expansion into the U.S. and beyond.

In reaction to the outrage, the owners published a statement on the company’s website, saying:

Our name was created from the popular phrase that people use as an expression of enjoyment, surprise or disbelief. Our aim is not to offer commentary on anyone’s religion or belief systems, Our own organization is made up of amazing people that represent a wide range of cultural and religious beliefs.

Similar to Voodoo Doughnuts, Sweet Jesus’ marketing plays off religious iconography to capture a trendy, sensational, and edgy appeal, which according to experts speaks to millenials. The ice cream store’s logo uses an upside down cross; its advertising contains a child with devil horns, and its products have kitcschy names such as HellaNutella and Red Rapture. The copy text uses words like “cross to bear” and “[g]od damn that’s good,” presumably referring to the Abrahamic deity Yahweh.

The popularity of Sweet Jesus is evidenced by its upcoming expansion with 19 stores throughout Canada, and one in Baltimore. According to Retail Insider magazine, the store plans to open 20 to 25 new locations worldwide over the next year, including one in Minnesota’s Mall of America, as well as in the states of Florida and Hawaii, and in the countries Dubai, India, and Bangladesh where it will be reportedly called Sweet Salvation.

Despite the stores’ popularity, devout Christians began protesting this month, asking the store to change its name. An online petition has been signed by 2,203 in less than 24 hours. It reads:

We, as Christians are deeply offended by the name of a new Ice Cream  [sic] chain of stores calling themselves Sweet Jesus. This is a mockery of taking the [Abrahamic l]ord’s name in vain and also highly offensive to Christians. The imagery used to promote the brand is also anti-Christ and therefore anti-Christian, for example,

A second one on Citizen Go has garnered over 10,000 signatures. In a March 27 update to that petition, the organizer writes:

This is nonsense. They are calling [the Abrahamic l]ord a flavour of ice cream. They are making a mockery of Christian symbols. They are abusing Biblical texts. This does not just happen by accident! It is clearly designed to provoke.

Unlike Sweet Jesus, the Portland doughnut shop has not attracted visible, public backlash from Voodoo or Vodou communities. However, it did received complaints and Twitter-based protests when it created a Charles Manson tribute doughnut this past fall. The owners were accused of “glorifying the mass murderer.” Tribute doughnuts are a regular feature of the store, but this particular one didn’t go over as well as others.

Witchdoctor Utu, founder of the Canadian-based Dragon Ritual Drummers, the Niagara Voodoo Shrine, and a member of the New Orleans Voodoo Spiritual Temple, said that he personally hasn’t hear of any complaints within his spiritual circles. He noted that most of his colleagues and contemporaries are not offended. “[They] think it’s funny,” he said.

As for himself, he said “Voodoo Doughnuts doesn’t bother me none. I have certainly over the months had many American friends send me pics of the stores or what they purchased there, it all seems in good fun,” but he then added that he couldn’t speak for all Voodoo workers.

Utu continued, “There’s no reason to try to swim up river as they say and claim offense, because for me there’s none taken. If there was one in my area, I would have already purchased one of their unique-looking creations and probably posted a fun pic about it. Obviously it’s showing a rare and sensational aspect of American voodoo in particular, because its really only North American voodoo that utilizes the ‘voodoo doll’, almost always as house protection.”

Utu is also a teacher, and noted that he’d like to have one of their Voodoo doughnuts on hand during a class so he can show students how prevalent the trope is within mainstream culture. “Then I’d take a nice big bite,” he said, laughing.

Will the store’s expansion into the southeastern U.S., which is a region that cradles the American center for many African traditional religions including Voodoo, Vodou, Lucumi and others, eventually cause a public outcry similar to Canada’s Sweet Jesus, or will its success remain quietly framed as a place of edgy fun and eccentricity?