Montt was a product of US Military training, in 1951 he attended the School of the Americas and in 1954 he played a role in the CIA orchestrated military coup against democratically elected government of President Jacobo Arbenz Guzmán.

The United States trained and backed former dictator of Guatemala Efrain Rios Montt died on Sunday, April 1, from a heart attack. Montt was a Guatemalan military officer and from 1982-1983 was head of the military dictatorship whose regime was one of the most violent and brutal Latin America had ever seen. His “hard-line” approach to the guerrilla movements and “communist activity” in Guatemala involved the disappearance, assassination and forced displacement of tens of thousands of indigenous Maya people and peasants.

The internal armed conflict in Guatemala that lasted from 1960 to 1996 was one of the bloodiest conflicts in Latin America, notable for the human rights violations against civilians and the state sponsored genocide of the Maya people.

The statistics speak for themselves. During the 36 year period, more than 200,000 men, women and children were murdered or disappeared. Just between 1981 and 1983, somewhere between 500,000 and 1.5 million people were forcibly displaced. At least 440 Maya communities were exterminated. Thousands of women and girls were subjected to sexual violence principally by the army and paramilitary groups. This is only a very brief summary of the violence and suffering that the people of Guatemala were subjected to, because it is impossible to summarize the immense pain and suffering suffered by the hundreds of thousands of victims.

One of the worst periods of the internal armed conflict was when Rios Montt was in power from 1982 to 1983. His brutal counter-insurgency tactics were essentially scorched earth policies, annihilating all supposed collaborators, sympathizers and members of the insurgency. He implemented a policy called “fusiles y frijoles” (guns and beans) which offered food and benefits to civilians who cooperated with the government and the army, and death to those who did not. 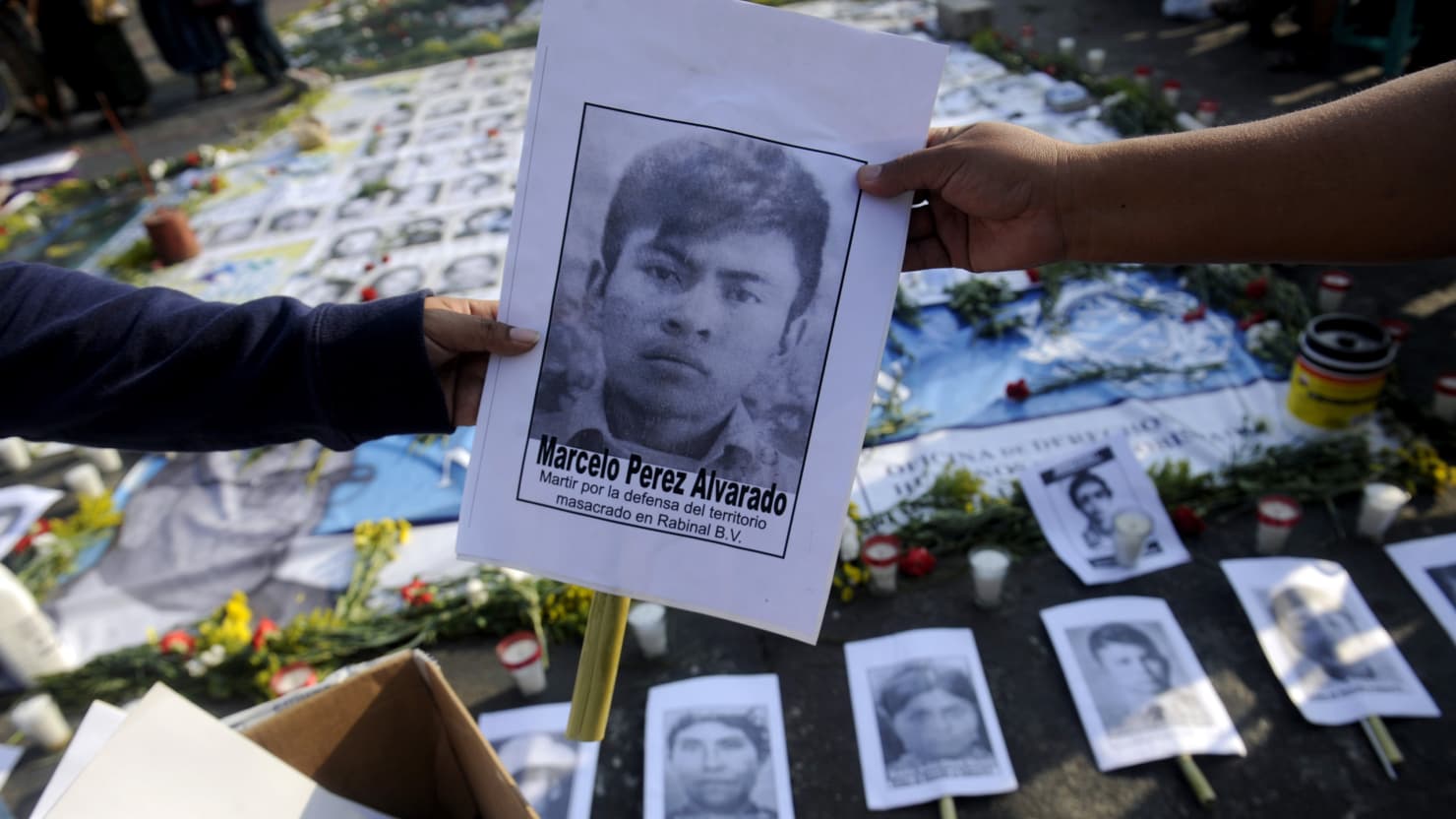 Product of the USA

Rios Montt’s murderous policies were not created in a vacuum, they were shaped, influenced and supported by powerful allies, and were not far off from the Guatemalan state strategy towards the insurgency throughout the conflict. Montt was a product of US Military training, in 1951 he attended the School of the Americas and in 1954 he played a role in the CIA orchestrated military coup against democratically elected government of President Jacobo Arbenz Guzmán. Guzmán had enacted pro-worker reforms, agrarian reform and took actions against the US corporation the United Fruit Company, in short completely threatening US profit and exploitation in Guatemala. After the coup, Rios Montt continued in the army, he was a career military officer and was part of the Guatemalan army throughout the majority of the armed conflict.

It is also interesting to note that in 1978, Rios Montt left the Catholic Church and joined the US based right-wing fundamentalist evangelical/pentecostal Church of the Word. He even began friendships with right-wing Southern Christians like Jerry Falwell, the televangelist and conservative activist infamous for his racist, homophobic and anti-public education views.

Once in office, he maintained a close relationship with President Ronald Reagan whose presidency was marked by harsh anti-communist Cold War policies, thus making Rios Montt a perfect ally.

On December 4, 1982 after a meeting between President Ronald Reagan and Rios Montt in Honduras and at the height of Rios Montt’s regime, Reagan stated : “I know that President Rios Montt is a man of great personal integrity and commitment. His country is confronting a brutal challenge from guerrillas armed and supported by others outside Guatemala. I have assured the President [Rios Montt] that the United States is committed to support his efforts to restore democracy and to address the root causes of this violent insurgency. I know he wants to improve the quality of life for all Guatemalans and to promote social justice. My administration will do all it can to support his progressive efforts.”

The US military aid and support for the Guatemalan army did not begin or end in 1982. An exposé published in 1999 in the Washington Post highlights the US complicity in atrocities and war crimes committed by the Guatemalan Army as well as concrete military aid and training. It states: “During the 1960s, the United States was intimately involved in equipping and training Guatemalan security forces that murdered thousands of civilians in the nation’s civil war, according to newly declassified U.S. intelligence documents…The documents show, moreover, that the CIA retained close ties to the Guatemalan army in the 1980s, when the army and its paramilitary allies were massacring Indian villagers, and that U.S. officials were aware of the killings at the time.”

Controlling Central America was one of the US government’s primary objectives during the Cold War, it was eager to squash out any marxist, humanist, Cuban, Soviet inspired uprising against the conservative governments of Central America that protected their economic interests and strategic interests, under the facade of defending “national security”.

As Reagan stated in 1983, “We’ve been slow to understand that the defense of the Caribbean and Central America against Marxist-Leninist takeover is vital to our national security in ways we’re not accustomed to thinking about.”

In 2013, Rios Montt finally went on trial for his war crimes, after enjoying several years of immunity while he served as a congressmen for the Guatemalan Republican Party. Hundreds of victims and survivors gave testimonies about massacres, forced displacement, rape and torture carried out by soldiers during the time of Rios Montt’s rule.

On May 10, Efraín Rios Montt was convicted of genocide and crimes against humanity and sentenced to 80 years in prison, for being the intellectual author of the death of 1,771 people, enforced displacement of 29,000, sexual abuse against 8 women and torture or at least 14. In March 2012, he was also charged with the death of 201 in Dos Erres, Peten, in December 1982.

The ruling was historic, for the first time after the era of bloody dictatorships in Latin America, one of the intellectual authors and war criminals was brought to justice. However this ruling was overturned 10 days later by the Constitutional Court over irregularities and the trial was reset for 2015. In January 2015, the court decided he was diagnosed with senile dementia so the court decided that he could not stand trial, and it would be conducted behind closed doors with his lawyers and if they reached a guilty verdict he would not have to go to jail.

Following his death, one of his lawyers Luis Rosales stated that, “He died in his home, with the love of his family, with his conscience healthy, clean, surrounded by a lot of love, afflicted by the ailments that we know about. He died in peace, and everyone with the conviction that in this country there was never a genocide and that he was innocent of what they accused him of.”

He died before the hundreds of thousands of victims could have real justice, before he had to face the consequences of his campaign of death and terror. His crimes against humanity remain in impunity.