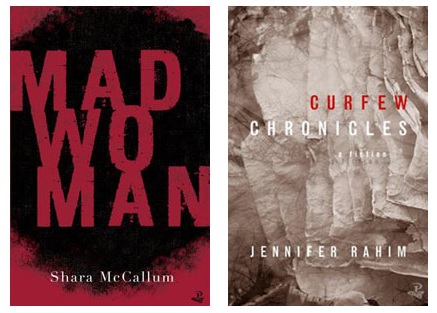 Books by writers from Jamaica and Trinidad and Tobago have been named to the shortlist of the 2018 OCM Bocas Prize, the Caribbean’s top literary award, sponsored by One Caribbean Media (parent company of the Express and TV6 and radio network). The shortlist consists of two books: poetry winner Madwoman, by Shara McCallum, and fiction winner Curfew Chronicles, by Jennifer Rahim. The final, overall award will be presented on April 28 during the 2018 NGC Bocas Lit Fest (April 25–29) in Port of Spain, Trinidad. Here is the full article by Bocas List Fest:

For the first time in the eight-year history of the prize, the shortlist consists of just two books: poetry winner Madwoman, by Shara McCallum, and fiction winner Curfew Chronicles, by Jennifer Rahim. There is no non-fiction winner for 2018, as the judges did not believe any of the eligible books “could be held to represent the best of regional writing.”

The two shortlisted titles will now enter the final round of judging, and vie for the overall award of US$10,000, to be presented on 28 April during the 2018 NGC Bocas Lit Fest (25–29 April) in Port of Spain.

Shara McCallum’s Madwoman, published in the UK by Peepal Tree Press and in the US by Alice James Books, is the author’s fifth book of poems. Drawing on personal and collective memory, McCallum’s poems are an exploration of womanhood, asking how perspectives and identities evolve over time, in different landscapes, in response to changing desires and traumas. Girlhood, adolescence, motherhood, middle and old age are stages in the growth of both anger and wisdom, charted in urgently lyrical lines.

Curfew Chronicles, published by Peepal Tree Press, is author Jennifer Rahim’s second book of fiction. She has also published four books of poems. Set during a fictionalised version of Trinidad and Tobago’s 2011 State of Emergency, Curfew Chronicles is a series of linked short stories unfolding over a period of twenty-four hours, with a cast of interconnected characters from all levels of society. The book, write the judges, is “challenging, requiring attentive reading, but one is amply rewarded for this care…. This is a profoundly moving work, demonstrating that despite the martyrdom of the good and the banality of evil, ‘There [is] a connection.’”

Past winners of the OCM Bocas Prize are Kei Miller, for Augustown (2017); Olive Senior, for The Pain Tree (2016), Vladimir Lucien, for Sounding Ground (2015); Robert Antoni, for As Flies to Whatless Boys (2014); Monique Roffey, for Archipelago (2013); and Earl Lovelace for Is Just a Movie (2012). Nobel Laureate Derek Walcott was winner of the inaugural prize in 2011, for his poetry collection White Egrets.