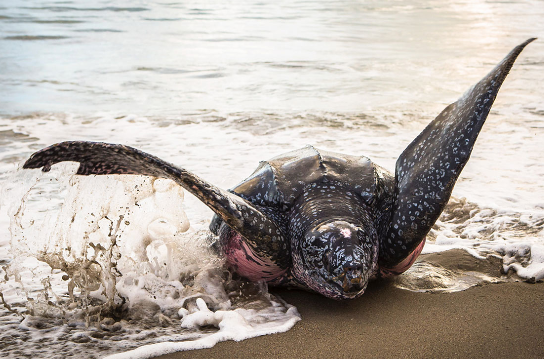 The latest edition of Discover Trinidad and Tobago includes a very interesting article by Nazma Muller on turtle-watching in Trinidad.

During peak turtle nesting season (1 March—31 August), five of the seven sea turtle species found globally return to Trinidad’s beaches to lay their eggs. Trinidad is the second largest leatherback nesting site in the world. Two months later, turtle hatchlings emerge (especially from June to August). Witnessing the nesting ritual, and clutches emerging from the sand, is an unforgettable experience.

[. . . ] Trinidad is the second largest leatherback nesting site in the world, with more than 6,000 of these heavyweights (up to 2,000lbs) travelling across the Atlantic to nest on the north and east coasts every year, from 1 March to 31 August. About two months later, the clutch of babies will emerge, like magic, from the sand pit. (Peak season for seeing hatchlings is June to August).

This country is home to five of the seven species of sea turtles found globally; all are on the International Union for Conservation of Nature (IUCN) Red List. The leatherback and olive ridley are listed as vulnerable; the green and loggerheadas endangered; and the hawksbill is listed as critically endangered. Three species — the leatherback, hawksbill, and the green turtle — nest on the beaches. Only a few dozen hawksbill and green turtles (40 at most) nest on our beaches each year. The loggerhead and olive ridley are less common locally but they are occasionally sighted at sea. There have been a few nesting records but these are few and far between. [. . .]

Conservation efforts in Matura and Grande Rivière require that permits be purchased at the Forestry Division to visit nesting sites. This is for the protection of the turtles and their eggs. Permits can be arranged through authorised tour guides and local accommodation, or directly at Forestry offices: Long Circular Road (622-7476)‚ San Fernando (657-7357) or Sangre Grande (668-3825).

One thought on “Turtle-watching in Trinidad”