A report by Shereen Marisol Meraji for NPR.

Diana de los Santos, better known as Amara La Negra, is black and proud. She’s also the breakout star of this season of Love & Hip Hop: Miami. Most importantly, she’s an Afro-Latina singer who won’t compromise her blackness for her Latinidad.

“If I say I’m Afro-Latina, you’ll automatically, visually in your mind see [that] I’m dark,” Amara tells NPR’s Shereen Marisol Meraji. “And [in] my family we all speak Spanish, we’re Latinos. This is my culture.”

While her distinct dancehall pop hooks and dembow rhythms have made hits out of songs like “What A Bam Bam” and “Se Que Soy,” Amara’s storyline on Love & Hip-Hop: Miami is proof of how difficult it can be for Afro-Latinas to make it in the entertainment business.

Born in Miami, Fla., Amara La Negra grew up singing, dancing, and acting. “Performing is what I was born to do, but it hasn’t always been easy,” she says.

Amara remembers dealing with racism and colorism in entertainment since pre-school. At 4, she won a competition that landed her on the the wildly-successful Hispanic variety show, Sábado Gigante. For the six years she was on the show, Amara says she was the only dark-skinned child in the cast and that producers would always place her either way in the back of the stage or smack in the middle “like a bug in the middle of a cup of milk.”

The comments about Amara’s appearance from people working on the show were constant. Amara’s mother was often told her daughter’s hair was unmanageable and needed to be permed.

“And I remember her looking at me and her face … it was just letting me know that this was the beginning of the struggle,” Amara says.

After years of straightening perms, hot combs, and dieting Amara decided she was done policing her body. So she took the stage name Amara La Negra, “love the black woman,” and embraced her afro.

Amara’s mother, Ana Maria, encouraged her daughter to embrace her natural beauty. As a native of the Dominican Republic, Amara’s mother came to the U.S. and raised the singer on her own in Miami. Ana Maria worked multiple jobs — cleaning houses, cooking, selling flowers on street corners — to pay for Amara’s dance classes and singing lessons. 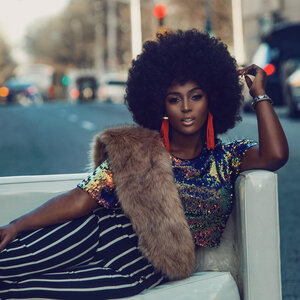 “I may have big dreams, but her dreams for me are even bigger,” Amara says on Love & Hip Hop: Miami.

Amara wants people watching her on TV to know that she doesn’t live some fancy or glamorous life. More importantly, she wants people to know what she’s up against in the music industry. She explains that racism and colorism run rampant in the business, and not just from white Americans, but from other Latinos, too. Amara proves this point early on the show when she meets with a Puerto Rican producer known as Young Hollywood.

“Instead of asking me about my music … he was too concerned about my hair,” she says. He told her to look “a little bit more Beyoncé, a little less Macy Gray.”

The Young Hollywood debacle sparked a conversation about colorism and the racist notion of mejorando la raza within the Latino community.

“I know that nobody wants to talk about it, but we suffer a lot of racism, we suffer a lot of colorism, amongst ourselves. You know, I get it all the time: ‘Oh whenever you get married, don’t get married to no black man because you want to better the race,'” she says. “Somebody needs to say something!”

Adolfo Cuevas, a professor at Tufts University who studies the cumulative effects of racism on the health of Afro-Latinos, is Afro-Dominican like Amara and says that while there’s not much data on Afro-Latino health, there are disparities between black and white Latinos when it comes to health outcomes. Even when black Latinos have received higher education than white Latinos, they are statistically less likely to be employed. And when they are employed, they make less money. Afro-Latinos also report having more health issues in general, and higher levels of depression.

Amara La Negra thinks more positive media representation can help heal the Afro-Latino community. Growing up, she remembers that Afro-Cuban salsa singer Celia Cruz was the only famous Afro-Latina who looked like her that she had to look up to.

“She was everything,” Amara says. “She was loud … she was very humble, she was an amazing person.”

Like Cruz, Amara La Negra wants to be a role model for Afro-Latinas coming up in the industry today. Now, with new multi-album record deal, a doll collection in the works, and (with fingers crossed) a shot on the big screen, Amara is working to bridge the gap.