A report by John Leland for the New York Times.

Lin-Manuel Miranda was on summer break from college when he learned something about how New York was put together. He was working for a bilingual newspaper started by his father, covering an event called “Salsa, Blues and Shamrocks.” The event, put on by an Irish bar and restaurant in the Dominican neighborhood of Washington Heights, was somewhat misnamed — it featured klezmer and merengue music as well.

For Mr. Miranda, then 20, it was a vision of New York’s disparate cultures not battling one another but jamming side by side. The institutions that endured, he realized, were those that “embraced every wave of immigration that’s come.” Within a few decades, this vision would inform the work that thrust him on the world.

On a December morning in Midtown Manhattan, Mr. Miranda, nursing a cold, reminisced about that summer, when he also discovered Morris-Jumel Mansion, the oldest house in New York, where Aaron Burr lived when he killed Alexander Hamilton in a duel. During the school year, Mr. Miranda had written and staged his first musical, “In the Heights,” at Wesleyan University in Middletown, Conn., and he had also moved into the Latino student house on campus, which gave him a new perspective on the layered worlds of New York and his own identity within them — part insider, part outsider looking in. Jumel Mansion, on Sugar Hill in Harlem, lay between Broadway and the two-story house in Inwood where Mr. Miranda grew up — with access to all those worlds but not bounded by any of them.

“You’re in a different century for exactly one block, and then you go down the steps and there’s a C-town, and you’re back in 2017,” Mr. Miranda said. “That’s to me what makes New York great — it’s all these things together at the same time. The feeling that you’re on the train with the Wall Street guy and the mariachi bands. We’re all in this thing together.”

At 37, Mr. Miranda can seem a fantasy of the Obama era, fulfilling the former president’s promise to “bridge the divide between Red and Blue America,” as Rolling Stone put it, and working the nation’s differences as assets rather than battle lines. “Hamilton,” a liberal romance about a conservative icon, invites audiences to play on multiple teams at once.

Now, in a more fractious climate, Mr. Miranda is getting ready for his next act. Fittingly, that is a break from the stage.

He and his wife, Vanessa Nadal, had their second child, Francisco, on Feb. 1, inspiring what USA Today declared “a perfect tweet”:

“I’m really looking forward to not going into rehearsal the next day,” Mr. Miranda said in December. “Looking forward to camping out with my family, and hopefully starting some new writing projects. But at least for the first half of 2018 I’ll be home.”

Mr. Miranda’s journey through New York begins with that of his father, Luis A. Miranda, a political consultant who worked in Mayor Edward I. Koch’s administration and founded the nonprofit Hispanic Federation.

The elder Mr. Miranda arrived in New York from Puerto Rico at age 18 with a college degree and limited English to attend graduate school at New York University. When he moved uptown to Inwood in 1981 after graduate school — he married a fellow student, Luz Towns, who is a clinical psychologist — the neighborhood “was not in good shape,” Luis Miranda said.

“In fact, it was sort of the capital of murders in New York City. Crime was rampant. But we immediately fell in love with the neighborhood. It reminded me of my town in Puerto Rico, Vega Alta, where you get to know people and you get to know the small businesses around them.” 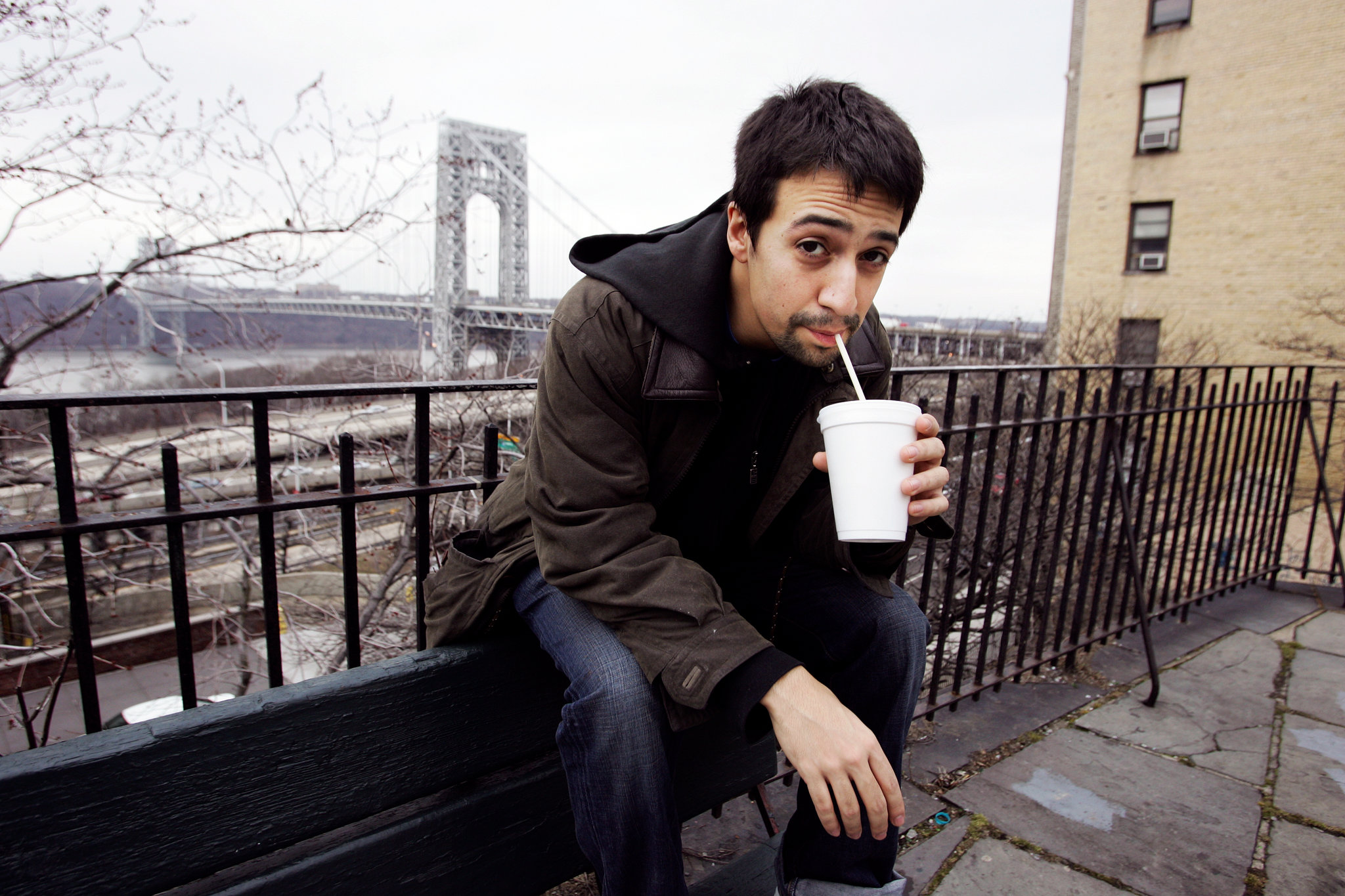 Lin-Manuel, who was born in 1980, learned to juggle multiple identities early, spending his home life largely with the same nanny who had raised his father in Puerto Rico, and riding the yellow school bus to the elite Hunter College Elementary School on the Upper East Side. Inwood, for him, “was like a little Latin American country,” a playland of bodegas and a vast park, albeit one where he occasionally found stolen car parts. Downtown, he said, was where he was “the one who can speak Spanish to everyone’s nannies.”

“I was code-switching between the two when I was 5 years old,” he said. “I’m Lin-Manuel at home and Lin at school. I remember going to see white Santa Claus at Macy’s and then seeing a darker Dominican Santa Claus on 176th Street at the community organization my parents volunteered at. That was my tale of two New Yorks.”

At home, his father spoke to him in Spanish, his mother in English. The house was filled with politicians and relatives visiting from Puerto Rico, sometimes for long stretches.

Even as a boy, “he navigated both worlds very easily,” the elder Mr. Miranda said.

Lin-Manuel’s older sister, Luz, brought home hip-hop albums; his father loved Broadway musicals, including “West Side Story,” which has been criticized for its largely stereotypical portrayals of Puerto Ricans. Lin-Manuel funneled both streams into the cassette tapes he swapped with friends.

“I was fortunate to grow up at a time when your currency was how good a mixtape you could make,” he said. “You’d trade and it was, O.K., we’re friends now, we made each other a mixtape.”

Making the tapes was his first training for writing Broadway musicals, he said. “It’s the best preparation,” he said. “I’m creating 90 minutes of material for you, I’m shaping the sound. It’s a rollercoaster of fast tempo, slow tempo. I can intercut bits of songs or comedy skits. I’m controlling the flow entirely, and you can’t skip tracks. I’m creating an experience for you of how I feel or how I want you to feel.”

Summers he worked for his father, canvassing door-to-door for candidates or writing music for political ads. “Not jingles,” Lin-Manuel said. “But he’d say, ‘I need 30 seconds of Latin jazz for a Sharpton ad,’ or something for Elliot Spitzer,” the short-tenured governor of New York.

One of his mixtape friends was Chris Hayes, who is now a host on MSNBC. Mr. Hayes rode the bus to Hunter from the Bronx neighborhood of Riverdale, and acted in plays with Mr. Miranda. Mr. Miranda rattled off songs from a mixtape Mr. Hayes gave him in ninth grade, all political songs, from Bob Dylan to the hip-hop group Digable Planets. Mr. Hayes said he and Mr. Miranda both saw themselves as less privileged than many of their classmates, and saw the bus ride uptown as a “literal manifestation” of their apartness.

Years later, when Mr. Hayes saw a very early workshop of “Hamilton,” still unfinished, he was struck by the parallels between the title character and the creator, he said. “Seeing Hamilton was an immigrant, he lives uptown, he’s got this outer-borough-striver chip on his shoulder that Lin and I both had — like, I’m going to show these fancy people I belong — it felt so him,” Mr. Hayes said.

For Mr. Miranda, Inwood is still home, and subways are still part of his travel diet. Last month he joined a successful campaign to save Coogan’s, the Washington Heights Irish bar that celebrated shamrocks and salsa. “Always happy to rep uptown,” he said. On this morning he was just back from London, where a production of “Hamilton” was starting, without him in the cast, and he was preparing to launch a toy drive for Puerto Rico. He has helped to raise more than $20 million for hurricane relief, and promised to bring “Hamilton” to Puerto Rico in 2019, with himself in the title role.

“Since Hurricane Maria, that kind of became my full-time job for a couple months,” he said. Though many relatives have left the island, escaping either the hurricane or the economic collapse that preceded it, others were still there and without power, Luis Miranda said.

His son’s advocacy for the island has drawn criticism from some Puerto Ricans, especially his 2016 support for an austerity debt relief bill called the Puerto Rico Oversight, Management and Economic Stability Act, or Promesa. The law created a financial control board for the island that was not accountable to the local government, and lowered the minimum wage to $4.25 for young workers. Provisions in the law have hindered recovery efforts after Hurricane Maria.

“I think his heart is in the right place,” said David Galarza Santa, a labor spokesman and community activist. “But it’s really difficult for me, because he became a poster child for this destructive law that would cause a lot of people to suffer. But seems like Maria slapped him back to reality.”

Since the hurricane Mr. Miranda has argued for stronger supports for the island, without the austerity imposed by the Promesa. “The government and those bondholders need to treat this as a Hollywood studio,” he said. “The movie didn’t go – you made ‘Pluto Nash.’ They don’t have your money. There is not one organization on the island that has the money. Austerity didn’t work. They need to forgive the debt and move on.”

Amid all this, he has starred in an upcoming film sequel to “Mary Poppins” and been a constant presence on Twitter, trading rap couplets with his two million followers and posting Spotify playlists, including a December compilation of instrumentals for students studying for final exams. His Twitter feed stands out as a relentlessly upbeat counterpoint to the grumbling that often fills the platform.

“Given the political climate we’re in, globally, there’s a lot of terrible things going on, and social media has been a way to highlight that,” he said. “And that’s very good. But I’m also very aware of being a corner that’s capable of an occasional goofy joke or a video of my son singing a cute song. I appreciate when I see bright spots in my timeline, and I try to be that for other people.

“This year I tried to take weekends off. I delete Twitter from my phone on weekends. The worst thing you can give me is an audience in my pocket. That’s not a good thing for a theater person.”

But he has kept up a flow of “Hamilton”-related works, including monthly “Hamildrops” — free new songs or remixes posted to various streaming services. Last month’s was a tart hip-hop remix of the song “Wrote My Way Out,” from the 2016 “The Hamilton Mixtape” album.

As for the changed political climate around “Hamilton,” Mr. Miranda said that was another theme explored in the show. The union that survives the title character at the show’s end is as fractious as the one that buys tickets today. And even in the current era, politicians do not express their differences with pistols.

“Hamilton is outlived by his foes, almost every one of which becomes president,” Mr. Miranda wrote in an email message. “Jefferson, Madison, Monroe (with whom he almost got in a duel), John Quincy Adams.

“We cannot control how the world reacts to our work. We can only control the work itself. So my show is embraced by one administration, not so much by the next.”

History, after all, has room for both visions of America, and neither lasts forever.