A report by Kim Severson for the New York Times.

Among the biologists, geneticists and historians who use food as a lens to study the African diaspora, rice is a particularly deep rabbit hole. So much remains unknown about how millions of enslaved Africans used it in their kitchens and how it got to those kitchens to begin with.

That’s what made the hill rice in Trinidad such a find.

The fat, nutty grain, with its West African lineage and tender red hull, was a favored staple for Southern home cooks during much of the 19th century. Unlike Carolina Gold, the versatile rice that until the Civil War was America’s primary rice crop, the hill rice hadn’t made Lowcountry plantation owners rich off the backs of slaves.

It didn’t need to be planted in watery fields surrounded by dikes, which meant that those who grew it weren’t dogged by malaria. You could grow it in a garden patch, as did many of the slaves who had been taken from the rice-growing regions of West Africa. This was the rice of their ancestors, sustaining slaves and, later, generations of Southern cooks both black and white.

Even Thomas Jefferson was a fan. Some researchers think he is the one who helped spread hill rice throughout the South, giving gifts of the African seed from a 30-gallon cask a ship captain brought him from Africa in 1790. But by World War I, the rice had all but disappeared, a victim both of cheaper imports that were easier to produce and of the Great Migration, in which millions of African-Americans left the rural South.

That’s why B.J. Dennis, a Gullah chef from Charleston, was stunned to find the rice growing in a field in Trinidad, tended by a farmer descended from slaves who once lived in Georgia.

Mr. Dennis had heard about hill rice — also known as upland red bearded rice or Moruga Hill rice — through the culinary organization Slow Food USA and the Carolina Gold Rice Foundation, the group that brought back Carolina Gold in the early 2000s. He’d also heard stories about it from elderly cooks in his community. Like everyone else, he thought the hill rice of the African diaspora was lost forever.

But then, on a rainy morning in the Trinidad hills in December 2016, he walked past coconut trees and towering okra plants to the edge of a field with ripe stalks of rice, each grain covered in a reddish husk and sprouting spiky tufts.

“Here I am looking at this rice and I said: ‘Wow. Wait a minute. This is that rice that’s missing,’” he said.

It is hard to overstate how shocked the people who study rice were to learn that the long-lost American hill rice was alive and growing in the Caribbean. Horticulturists at the Smithsonian Institution want to grow it, rice geneticists at New York University are testing it and the United States Department of Agriculture is reviewing it. If all goes well, it may become a commercial crop in America, and a menu staple as diners develop a deeper appreciation for African-American food.

“It’s the most historically significant African diaspora grain in the Western Hemisphere,” said David S. Shields, a professor at the University of South Carolina and chairman of the Carolina Gold Rice Foundation, who works with Mr. Dennis on historical culinary projects and was with him that rainy day in Trinidad.Mr. Dennis, 38, believes food is the living bearer of history. He has devoted himself to promoting the cooking of the Gullah-Geechee Nation, the descendants of West Africans who lived along the coast from North Carolina to North Florida. Their cooks created the peanut stews, okra-laced purloos and seafood that define Lowcountry cuisine. 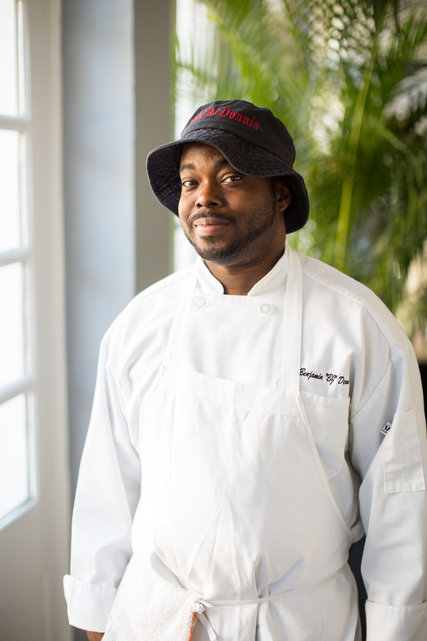 “What I am doing is searching for my culture through food,” he said.

But how did the rice travel to that field in Trinidad? Dr. Shields has a theory.

It begins during the War of 1812, when British soldiers promised land and freedom to a small group of West African slaves along the Eastern Seaboard if they would take up arms against their masters. They did, and each was given 16 acres of undeveloped land in southern Trinidad. They came to be called the Merikins, a Creole rendering of the word American.

One group was the Fourth British Marine Company, from the Georgia Sea Islands. The rice, which Dr. Shields believes can be traced to Jefferson’s barrel of seed, was among the crops the group brought with them to Trinidad.

The missing piece of the puzzle would have not been found if it hadn’t been for Trinidadian ethnobotanist Francis Morean, a man with Merikin roots who has recorded interviews with most of the 60 or so Merikins still growing hill rice on the island.

Mr. Morean had traveled to the American South in September 2015 as part of his exploration of African diaspora cooking. He had heard about Mr. Dennis, but wasn’t able to find him. Then, a few months later, Mr. Dennis reached out to him on Facebook, and the two bonded over their interest in using agriculture to keep their shared heritage alive.

Still, no one had made the connection between the rice in Trinidad and the rice that had been lost in the American South. Most students of Gullah-Geechee cuisine thought Carolina Gold was the only rice that enslaved Africans in the coastal South had cooked. 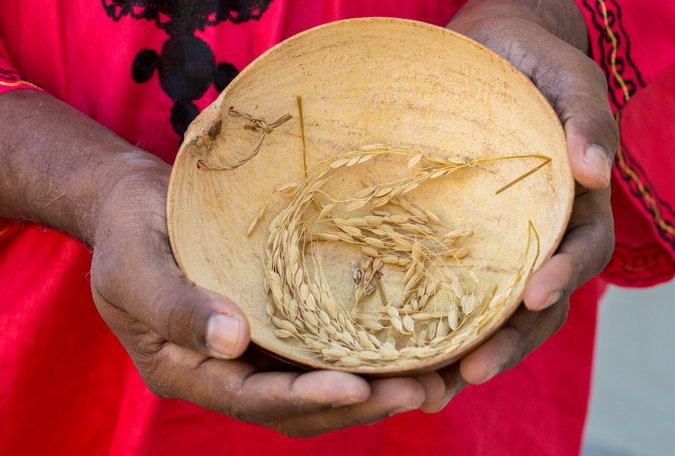 Mr. Morean organized a small rice symposium in Trinidad in the winter of 2016, and asked Dr. Shields to present a paper on the island’s hill rice. Also on the guest list were Mr. Dennis and Queen Quet Marquetta L. Goodwine, the elected leader and official spokeswoman of the Gullah-Geechee Nation, who often employs Mr. Dennis to cook for official events.

Dr. Shields, who is part of a global effort to find new ways to grow rice on dry land, began his research, and realized that the Trinidad hill rice might be linked to the missing American rice, which in turn could be traced all the way back to the West African rice fields.

On that wet morning in Moruga, Trinidad, he had his answer.

“When I got out of the car and walked toward the field and saw the rice just about to be harvested, I knew it had to be the real thing,” he said. “It was like you see the story made flesh. You see something that has existed as really an abstract possibility suddenly become real.”

Mr. Roberts arranged to have about 80 pounds of the Trinidad rice shipped to the United States. A few pounds made its way to Edouardo Jordan, the Southern chef who opened the restaurant Junebaby in Seattle last year. Mr. Jordan cooked with it and loved it.

The rice performs differently in the kitchen than Carolina Gold, which works best in wet or creamy recipes like Hoppin’ John or risotto. Hill rice is better dry, with an okra stew or a sauté or chutney piled on top.

Mr. Jordan is so enamored that he is trying to find farmers in the Northwest to grow it, once the seed is approved by the Agriculture Department.

“If we can bring this back,” he said, “the historical back story could deepen the development of African diaspora food in America and better tell the real story of Southern food.”

At another rice symposium held by the Carolina Rice Foundation in April, Mr. Dennis prepared hill rice for everyone. He cooked it the way he had learned to during his time in Trinidad, simmering it in coconut water until the rice became starchy. Then he covered the rice with chutney made from grinding toasted benne seeds; an herb called shadow benne that is similar to cilantro; some bird’s-eye peppers, and garlic with a little oil. It was delicious.

Like many a detective story, this one has some loose ends.

Michael Purugganan, a New York University biology professor, was at the Charleston event. He had been part of a team that in 2015 sequenced the genomes of Oryza glaberrima, the African crop now grown by descendants of escaped slaves in the South American country Suriname, and connected it to rice that grew in Ivory Coast.

That discovery was concrete evidence of the high level of rice-growing knowledge among African slaves, and marked the first time genetics had been used to pinpoint the origin of a slave crop in the Americas.

Could the Trinidadian rice be another example? Dr. Purugganan took the rice to his laboratory in Greenwich Village and sequenced its genes. 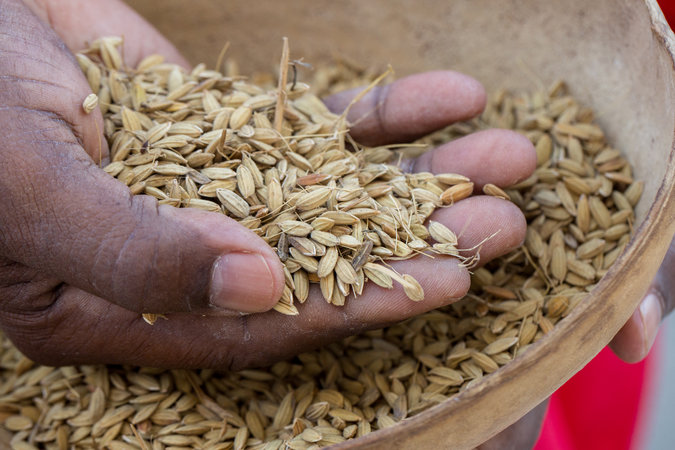 It turned out not to be indigenous African glaberrima, but more likely a Japonica rice that made its way from Southeast Asia to West Africa between the 16th and 18th centuries.

Amy Lawton-Rauh, a Clemson University professor of genetics and biochemistry who is working on the genetics of hill rice, is using population genomics tools to test whether the hill rice has a more complex history. It could even be a hybrid, she said, and not necessarily linked to Jefferson’s rice.

So much rice may have been passed around among slave families and descendants that there is no way to be certain where the seed originated, said Christopher Wilson, director of experience design at the Smithsonian’s National Museum of American History.

“It might be too much to just give credit to Jefferson,” Mr. Wilson said. “We know about him because we have records. But people miss just how big rice was, and how much money was involved and how much history we have no written record of.”

Still, he is as excited as anyone about the hill rice. He has introduced Mr. Roberts to a horticulturist at the Smithsonian to grow and display some of the hill rice. Last summer, Mr. Wilson invited Mr. Roberts to discuss the rice alongside Michael Twitty, a culinary historian and the author of ”The Cooking Gene: A Journey Through African American Culinary History in the Old South” at a Smithsonian event.

Mr. Twitty, who first heard about the rice from Mr. Dennis, has embraced it. It fits in nicely with his work, which includes researching the links between Southern food and West African cooking.

For the event, Mr. Twitty used it as the base for a chicken stew, made in the style of the Mende people of Sierra Leone, that he cooked with palm oil, onions and garlic. “I don’t really like brown rice at all, but it’s not like that,” he said.

His appreciation goes beyond taste: The rice helps validate the African experience in America. “It’s another living artifact that automatically wipes out any nonsense about the earliest years of African-American food,” he said.

For now, no one is growing the rice commercially, but Dr. Shields and Mr. Roberts hope it will be embraced by Gullah farmers, and spread from there. In the meantime, they hope to find an economical way to import it from growers in Trinidad.

For Mr. Dennis, the chef, a steady supply would ensure that his purloos, like the rice-and-okra dish called Limpin’ Susan (often referred to as the cousin or wife of Hoppin’ John), would have a new dimension.

He also hopes that the rice will eventually sell at a price that most cooks can afford, and that African-American home cooks will come to see the hill rice and other traditional dishes as healthier alternatives to a popular perception of soul food.

“We’ve been warped into thinking it’s mac-and-cheese and collard greens,” he said.

African-American cooking, at least as defined in the Lowcountry, is about slow-cooked peas and vegetables and specific strains of rice, he said.

“Culturally, this rice is a hidden story of the African-American and enslaved narrative,” he said. “A lot of our ancestors were not able to read or write, so a lot of stories aren’t able to be told. But we can cook this rice, and we can tell the story.”

One thought on “Finding a Lost Strain of Rice in Trinidad, and Clues to Slave Cooking”