A report from Agence France Presse.

American fashion’s elder statesman Ralph Lauren headlined New York Fashion Week on Monday with a dose of escapism inspired by Jamaica for his 2018 spring collection, as his  brand struggles to reverse falling revenue.

If the rest of Planet Fashion is focused on  autumn/winter, the 78-year-old Lauren remains wedded to see-now, buy-now clothes, switching his schedule in 2016, which means that his runway clothes are immediately available in stores around the world.

On a drab February morning, he transported his guests to a set evoking his stunning villa in Round Hill, Jamaica – a society enclave frequented over the years by f Clark Gable, Grace Kelly and Ian Fleming, where John and Jacqueline Kennedy honeymooned.

His models walked down a blue infinity-pool effect runway in front of a beachfront sitting room watched by actresses Hilary Swank and Rachel Brosnahan – star of The Marvelous Mrs Maisel hit show on Amazon – in the front row. 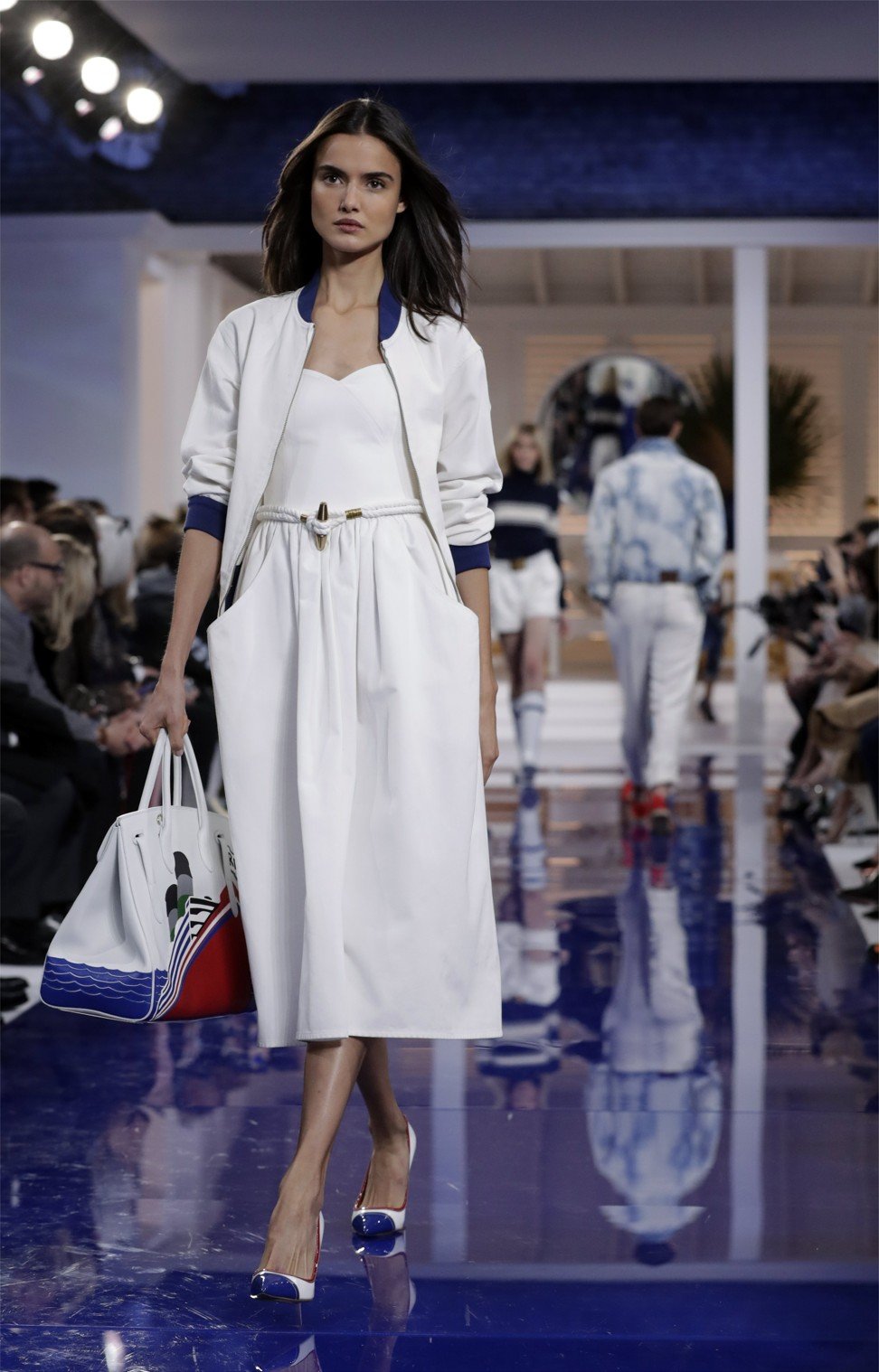 The show was a master class in the rags-to-riches designer’s unique, clean silhouette that for decades has personified upmarket East Coast style.

It opened with a calypso Caribbean beat as models walked barefoot dressed in delicate blue and white floral dresses with full skirts and flirty necklines, before giving way to models in stilettos and Bella Hadid dressed in a cocktail dress.

It then segued into classic maritime look, updated with white plastic-looking shorts worn with rain boots, giant anchor-style medallions at the neck, and with striped sweaters and a black captain-style leather jacket for men.

There was a classic white pantsuit – perhaps a nod to the colour of suffragettes and the women’s power dressing look seen elsewhere on the runway this season from a designer who has dressed Melania Trump  as well as Hillary Clinton.

If it was spring, there was plenty of inter-seasonal clothes, another trend increasingly used by designers when dressing a global market and with an eye on the Asian market.

If Jamaica encapsulated a mood of escapism in difficult times, both business-wise and politically speaking, the label also proudly revived the classic Ralph Lauren navy sweater with a United States flag emblazoned on the front.

Colours were bright and energetic, with dresses in blocks of canary yellow, red, blue, red, green and white.

Lauren walked the runway at the end, dressed in jeans, a navy blazer and brown cowboy boots, giving his wife a kiss.

“In a way, it’s like the Garden of Eden,” Lauren has said of his paradise on earth in the Caribbean.

But it remains to be seen whether his quintessential blueprint can help revive sales in an industry so beloved of change.

Ralph Lauren announced on February 1 that companywide third quarter revenue fell 4 per cent to US$1.6 billion, despite growth in Asia and Europe.

Sales at its North American stores fell 10 per cent during the holiday season quarter, including a 27 per cent decrease in e-commerce.

“There is still a lot of work to be done to return to industry-leading revenue and earnings growth, but these results give us confidence that we are on the right track,” said Patrice Louvet, president and CEO.