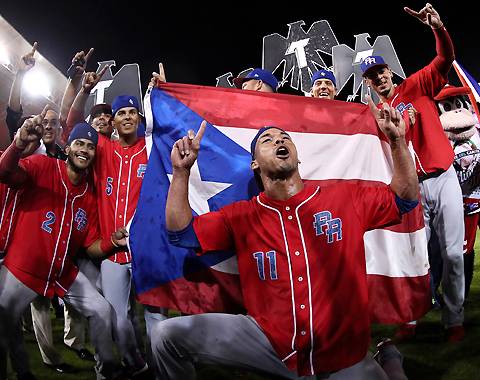 Puerto Rico catcher Jonathan Morales knew the ball was gone once it left his bat.

Morales strutted out of the batter’s box, tossed the bat and watched the ball sail through the air. The Puerto Rico fans rose to their feet to watch the drive while the men on base — former big leaguer Ruben Gotay and Dayron Varona, who spent part of last season in the Minors with the Rays — began jumping up and down.

When Morales finally reached home, he pounded his chest and stomped on home plate like the game was over.

Two innings later, it was.

Morales’ three-run homer capped a five-run seventh inning and propelled his team to a 9-4 victory over the Dominican Republic in the Caribbean Series championship game. The title is the second in a row for the Criollos de Caguas and the island’s 16th championship overall.

The team from Puerto Rico dedicated the victory to its beloved island, which was devastated by Hurricane Maria in September.

“This victory means a lot for me and my country of Puerto Rico, because it’s been hard and it’s been a tough situation because of the hurricane,” Morales said. “But it doesn’t matter, because when you have God in your heart, you play and you get that W. I feel blessed.”

“This is an opportunity you don’t have every day,” Matos said. “It’s hard to be a champion in Puerto Rico, to win back-to-back titles and to come here to the Caribbean Series and do the same thing. I know we were able to give some joy and excitement for a week. Puerto Rico is going through a lot of things, but I know Puerto Rico is very happy for this and they are enjoying it right now.”

Leading 6-4, Puerto Rico tacked on three more runs — two on a double by designated hitter Johnny Monell and another on an RBI single by Gotay — in the eighth inning to extend the advantage to five runs and put the game away. Morales, who was drafted by the Braves in 2015 out of Miami-Dade College, started last season in Class A Advanced and finished it at Double-A. The catcher’s homer turned a 4-3 deficit into a 6-4 lead. He finished the game 1-for-4.

“I call them the fighters because they don’t quit,” Matos said. “That’s what I tell everybody. You have to play until the 27th out, and you can see in the semifinals that we were behind and in the finals we were behind, but we came back. A victory is a victory, so we are very happy and pleased with what we did here.”

The Dominican Republic scored twice in the first inning on a double by former Major Leaguer Juan Perez. Left fielder Junior Lake scored on the base hit and drove in a run on a double in the third to push the Dominican Republic ahead, 3-0. Puerto Rico center fielder Rusney Castillo, who will attempt to make Boston’s big league club this spring, scored the island’s first run on a homer in the third inning.

Gotay’s two-run single in the seventh set the stage for Morales’ game-winner.

Despite the loss, Lake might emerge from the Caribbean Series as one of the biggest winners of the tournament. He could sign a Minor League deal before the start of Spring Training and become the latest player to land a job after playing in the annual tournament.

Last season, Lake, 27, played at Triple-A with the Red Sox until he was released in May. He went on to play in Mexico during the summer and in the Dominican Republic Winter League in the fall. Earlier in the week, Lake hit the 1,000th home run in the history of the tournament. He finished the championship game 2-for-4.