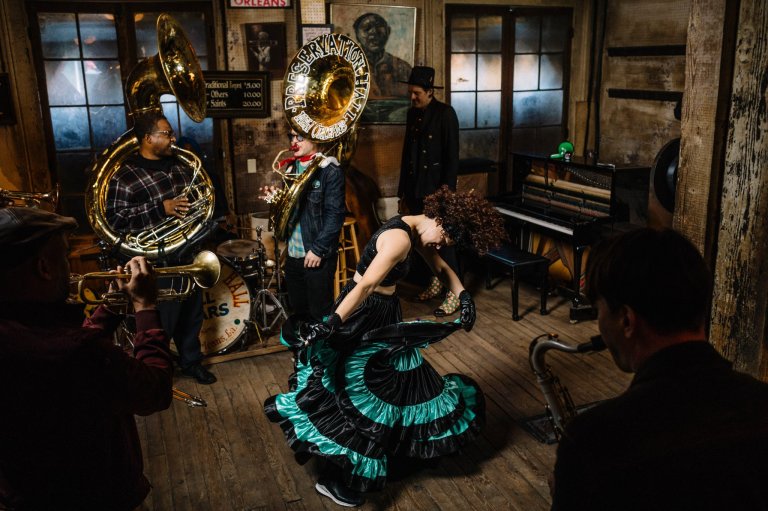 A report by Richard Fausset for the New York Times.

Régine Chassagne was standing barefoot in her rambling New Orleans home on a recent weekday, showing members of the Preservation Hall Jazz Band how to play the horn parts for her latest musical project.

It was a galloping Carnival anthem played in the Haitian style and sung largely in Haitian Creole, a language the jazz players did not understand. Ms. Chassagne, a Canadian-born daughter of Haitian exiles, described their parts with swooping hand gestures. At one point, she told them to play “like fireworks — poof!”

The jazzmen, masters of translating emotion into sound, nodded along, unfazed.

Ms. Chassagne, 41, is a founder of the rock group Arcade Fire, a French speaker of mixed racial heritage who grew up in Montreal playing the piano to old Louis Armstrong recordings. More recently, she has become a prominent advocate for the Haitian people and for a Haitian culture that has had an outsize, if not always recognizable, influence on New Orleans, where she and her husband, Win Butler, have lived for about three years.

For this year’s Carnival season, the period of revelry before Lent, Ms. Chassagne and Mr. Butler, the Arcade Fire frontman, will highlight their adopted city’s Haitian connections with the kind of primer its residents readily understand: a raucous procession by the couple’s Haitian-themed Mardi Gras troupe, the Krewe du Kanaval. Founded in collaboration with the New Orleans jazz hub Preservation Hall and rounded out by local and Haitian musicians, the krewe plans to parade through the streets of the French Quarter and Treme on Tuesday, a week before Mardi Gras, and put on a free street party.

It is likely to be the loudest love song to Haiti to emanate from New Orleans in many decades, at a time when many are still stinging from a coarse insultfrom the president and the end of a humanitarian program that allowed more than 45,000 Haitians to live and work in the United States.

“I’m the one pushing for it,” Ms. Chassagne said of the band’s focus on Haiti, “and I’m pushing for it because it’s the story of my parents, and the culture. Their culture is what made me who I am.”

Some in New Orleans say the same could be said for the city.

“There’s this huge connection between the cultures that hasn’t really been explored,” said Branden Lewis, 30, a trumpeter with the Preservation Hall Jazz Band. “My existence is testament to that fact, and I don’t really know anything about Haiti.”

Mr. Lewis grew up in Southern California, but his family members are Louisiana Creoles who trace their roots to people of African descent who came to Louisiana from Haiti in the 19th century.

It is a common New Orleans story. In 1809 and 1810, the population of the city roughly doubled when more than 10,000 French speakers from the colony of St. Domingue — whites, slaves and free people of color — arrived from eastern Cuba, according to Ned Sublette, the author of the 2008 book “The World That Made New Orleans.” They had gone to Cuba from what is now Haiti amid the tumult of the Haitian revolution, but were subsequently expelled by the Spanish.

The new arrivals made a profound mark on New Orleans, influencing its legal profession, cuisine, journalism, politics and music. In the book, Mr. Sublette argues that they delayed the Americanization of the city “for perhaps two generations.”

But Americanization eventually won out, and the French language faded. And while family names familiar to any Haitian — Dumas, Toussaint, Barthelemy — remain common in New Orleans, the Haitian influence has become so prevalent, so deeply mixed into the city’s complex cultural stew, that it can be difficult to pick out.

“Haiti definitely had an influence on New Orleans, but it’s hard to see if you’re not looking,” said Donald Link, a local chef who has been researching the city’s culinary ties to the Caribbean world.

The idea of outsider rock stars making a mark on Mardi Gras has prompted some grumbling in a city that fiercely guards its cultural traditions. Mr. Lewis said some locals had criticized the Krewe du Kanaval as an act of cultural appropriation. It would not be the first time such charges have been made against Ms. Chassagne or her band, whose other members are white and which has come under fire before for adopting Haitian influences and iconography.

In 2016, they set off an intense online debate among New Orleanians when they joined with the Preservation Hall Jazz Band for a New Orleans-style parade for David Bowie, who died in January of that year. 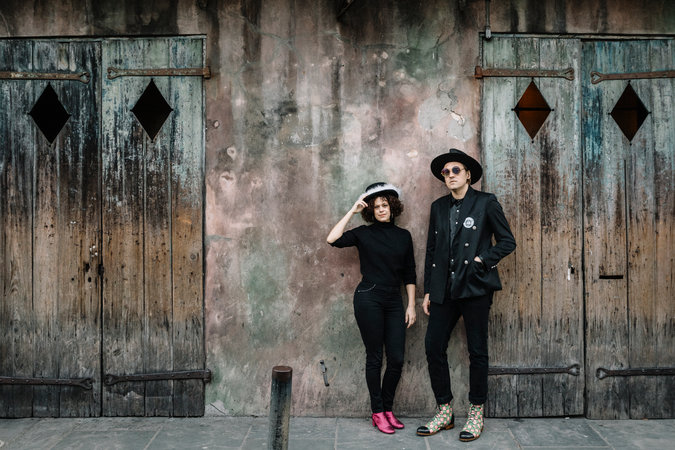 Ms. Chassagne and her husband, Win Butler, Arcade Fire’s frontman, have lived in New Orleans for about three years.

“Shouldn’t you have at least some tie to New Orleans to get a second line?”one commenter said, referring to the city’s tradition of jazz funeral parades.

Mr. Butler shrugged off the complaints on a recent evening while sipping rum on his back porch with Ben Jaffe, Preservation Hall’s creative director. Thousands turned out for the Bowie parade, Mr. Butler said. Thousands were moved.

Mr. Jaffe, a New Orleans native, agreed, arguing that the city has always made room for respectful newcomers looking to make a mark on the culture. His parents, Allan and Sandra Jaffe, were music fans from Philadelphia who stumbled into New Orleans’s traditional jazz scene while on their honeymoon in 1960. The next year, they opened Preservation Hall, playing a major role in the traditional jazz revival in the city.

“That was one of the reasons they came down here — to sort of absorb that thing that they were attracted to,” he said. “Isn’t that what New Orleans has always been, though?”

Ms. Chassagne’s attraction to the Caribbean world feels like an effort to reclaim a heritage that history tried to rob from her. Her parents fled, separately, from Haiti in the 1960s, amid the violence imposed by supporters of the Haitian dictator François Duvalier. Several of her mother’s relatives were killed in a 1964 massacre in the town of Jérémie, and her mother, traumatized, never returned.

Ms. Chassagne would not visit the island until after the band became famous. She describes a Montreal childhood absorbing wisps of Haiti: her parents chatting in Creole, the way her mother danced in the kitchen, the Christmas parties with kompa music on the stereo.

A fair-skinned member of a family of many hues, Ms. Chassagne also remembers listening as darker-skinned relatives talked about the way white people would treat them.

Now, she and Mr. Butler stand out in other ways. New Orleans is still adapting to having the famous indie-rock couple in its midst: One city government official recalled seeing the pair on the street at Halloween, and mistaking them for local residents in really convincing Arcade Fire costumes.

In the past few days, Ms. Chassagne and Mr. Butler have been scrambling with last-minute details. They have corralled into their Carnival project Haitian-Americans including Leyla McCalla, an unclassifiable multi-instrumentalist who performs some songs in Creole, and Charly Pierre, a chef and a winner of the Food Network’s “Chopped” contest, who will be providing some of the food.

The couple has also been reaching out to the Haitian immigrant community. On Jan. 11, Ms. Chassagne and Mr. Jaffe promoted the festivities on Radio Gonbo Kreyol, a New Orleans internet radio station that serves Creole speakers, as stories began to circulate that President Trump had crudely disparaged Haiti in a White House meeting.

The Census Bureau estimates that fewer than 500 people in metropolitan New Orleans claim Haitian ancestry, but Barthelemy Jolly, a Haitian native and vice president of the radio station, believes the Haitian immigrant community is thousands strong. Many of them are taxi drivers and hotel maids, he said, and they have tended, over the years, to keep a low profile.

But Mr. Trump’s comments prompted scores of Haitians to march together at the Women’s March on Jan. 20, which passed through the city’s central business district and the French Quarter, bearing Haitian flags. Mr. Jolly said that he expected many more to come to the Krewe du Kanaval party.

“The Haitian community, they’re going to be out there,” he said.

So the possibility looms of a party where second-line rhythms bleed into Haitian mizik rasin, where the vestiges of Caribbean roots mingle with the new.

If nothing else, it will probably be a good time, though Ms. Chassagne hopes it will be something more. “If we want things to move forward we need to experience each other’s company,” she said. “You can’t just retract in your corner.”

One thought on “In New Orleans, Whispers of Haiti Become a Brassy Mardi Gras Shout”