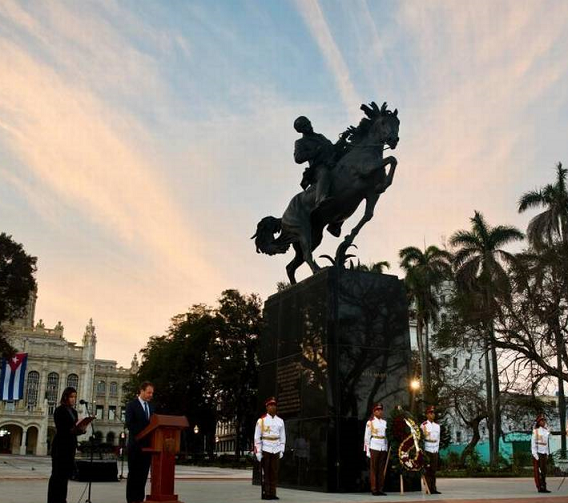 In Havana, Cuba, today (Sunday, January 28, 2018), Joseph Mizzi, the chairman of the Bronx museum’s board of trustees, spoke at the ceremony before unveiling a replica of a New York statue of Cuba’s independence hero Jose Martí. The monument was unveiled on the 165th anniversary of the birth of the Cuban independence hero. The original sculpture was created by Anna Hyatt Huntington when she was 82 years old; it is the only one that depicts Martí on horseback. The Miami Herald reports:

A bronze replica of a famous statue of José Martí that has graced New York’s Central Park for more than half a century was dedicated to the people of Cuba just as the sun cast a rosy glow over Havana on Sunday morning, the 165th anniversary of the Cuban patriot’s birth.

Cuban leader Raul Castro attended the brief dawn ceremony at the 13 de Marzo park but did not speak. The current tense relationship between the United States and Cuba was not mentioned in remarks by Eusebio Leal, the historian of the City of Havana, nor by Joseph Mizzi, chairman of the board of trustees of the Bronx Museum of the Arts, which led a $2.5 million fundraising campaign to make the statue.

The project, which began under the rapprochement with Cuba during the Obama administration, was made possible by donations both large and small by the American people.

The dedication came on the heels of a massive torchlight parade that began on the steps of the University of Havana Saturday night and flowed through the streets of the capital. Castro, old guard revolutionaries Ramiro Valdes and José Ramon Machado Ventura, and Miguel Diaz-Canel, widely viewed as Castro’s successor when he retires from the presidency in April, briefly joined the marchers. [. . .]

Although there are many statues of Martí in Cuba and across the globe, the original sculpted by Anna Hyatt Huntington, is the only one that depicts him on horseback — just before he fell in battle.

Josefina Vidal, the chief Cuban negotiator during rapprochement talks with the United States and head of the Foreign Ministry’s U.S. division, said the statue represented “the sublime moment of maximum sacrifice” by Martí. “With the efforts of many people of goodwill, the statue is now here.”

Hyatt Huntington, who finished the original sculpture at age 82, presented it to the City of New York as a gift from the people of Cuba and it has been located in Central Park since 1965.

The 17-ton replica traveled from Port Everglades to the Cuban port of Mariel in a special metal cage to protect it, said Jay Brickman, Crowley’s Maritime Corp.’s vice president of government services. Crowley, which provides regular shipping service from the United States to Mariel, supplied free transportation for the replica. [. . .]