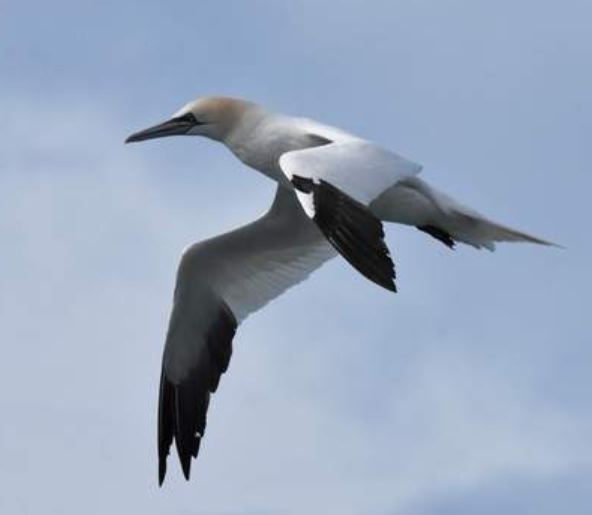 The Bermuda Audubon Society got a major birdwatcher’s treat when a northern gannet was seen at St George’s Harbour, Bermuda. President of the Bermuda Audubon Society, Andrew Dobson is quoted in the article below, explaining the significance of this sighting. Mr. Dobson will deliver an annual illustrated bird lecture—this year entitled “2018: Year of the Bird”—at the Bermuda Underwater Exploration Institute on Tuesday, January 30, at 7:30pm.

One of the largest plunge divers in the world made a rare and spectacular appearance off the North Shore. A northern gannet, which boasts a wingspan of 6ft, was spotted fishing off the coastline and in St George’s Harbour. According to the Bermuda Audubon Society, its dive from height into the ocean came as a treat for local birders and residents of St George’s.

Northern gannets are native to North America. However, they winter along the whole of the North American coast, including the Gulf of Mexico.

President of the Bermuda Audubon Society, Andrew Dobson, said, “It does not occur annually in Bermuda and most records have been of immature birds. “Gannets take four to five years to attain their all-white plumage with black wing tips, so this is an experienced bird driven out into the ocean by recent storms.”

Mr Dobson said a second adult bird was found this month off the coast in Somerset. It was taken to the rehabilitation facility at Bermuda Aquarium, Museum and Zoo but did not survive. [. . .]

[Photo above by Andrew Dobson: a northern gannet flies over St George’s Harbour.]