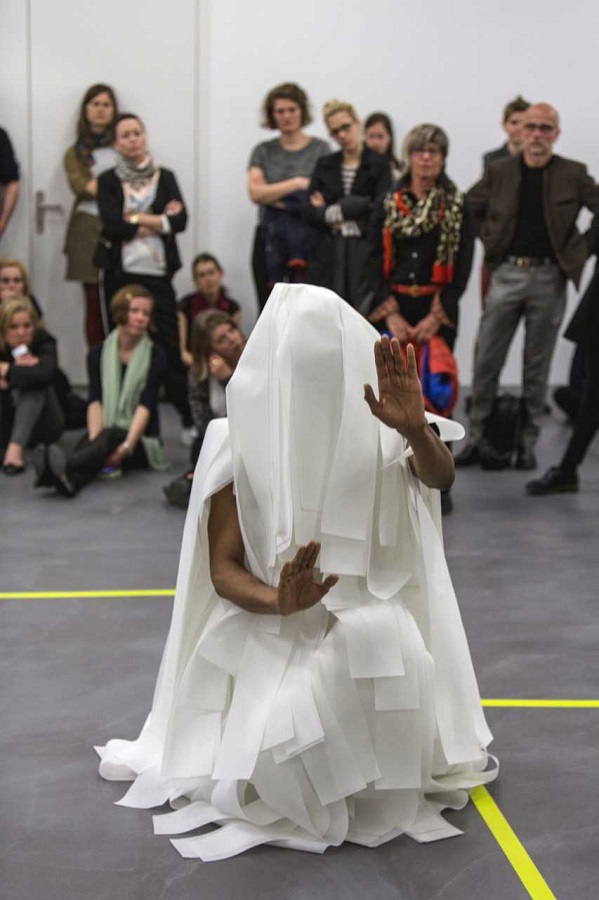 A report by Asia Morris for the Long Beach Post.

“I think that most of us hope that we are actively participating in how we are perceived but, the truth is that some of us have less political and cultural power than others,” Museum of Latin American Art (MOLAA) Curator of Education Gabriela Martinez told the Post.

Such an imbalance in political and cultural power can result from an economic system where citizens with more money can purchase the time or the platform to be heard and systemic inequalities where, historically, a group has been perceived as not as important as the dominant group, Martinez said.

“We talk a lot—especially recently—about how certain groups are sometimes represented and thus treated unfairly, be it because of a specific ethnic, cultural or class background, their sexuality, gender, religious beliefs or political leanings,” Martinez said.

“Politics, media, and popular culture are filled with stereotypes or accepted ways of talking about these groups that were not constructed or defined by the group itself,” she continued. “And I think that the majority of us understand how important it is for individuals from these groups to be able to speak for themselves, construct their identities, and represent themselves in the public sphere.”

Enter what will be three visceral performances in one evening, where artists from three linguistically diverse parts of the Caribbean (French-, Spanish- and English-speaking islands) will offer an audience a chance to engage with their actions on Saturday from 5:30PM to 8:00PM. A reception with the artists will follow the performances.

The performances are thematically linked to the fourth section of Relational Undercurrents, called Representational Acts (which is also the title of the performance festival), which showcases the work of artists “engaging in actions of representation as opposed to just reflecting upon—or ‘consuming’ (buying into)—how they are perceived or defined,” said Martinez, who organized the event.

Andil Gosine of Trinidad will perform Our Holy Waters and Mine (2014), drawing from his background as a queer Indo-Trinidadian man and calling attention to South Asian migration to the Caribbean through referencing individual servitude and Kala Pani (“black waters”), the Hindu taboo against crossing the sea, according to MOLAA.

Cuban-born Carlos Martiel, a New York-based artist, will perform América (2017) where the artist has 116 stars from the flags of all the countries in the Western hemisphere attached to his body. Martiel’s work creates the visual effect of “a constellation on the artist’s body, a conceptual map in which no state is superior to another, but instead come together within a unified field,” according to the release.

Jimmy Robert of Guadeloupe will perform Abolibibelo (2015), where the artist appears in a costume made of white rolls of paper. Appearing in what could resemble carnival attire, the artist makes deliberate movements to a droning audio track, in contrast to the rhythms of Caribbean music and dance, “fusing avant-garde performance with traditional festival arts.”

Andil Gosine, Our Holy Waters and Mine, 2014. Performance at the Queens Museum, New York. Courtesy of the artist.

“I am very much looking forward to the audience’s reactions to the performances,” Martinez said. “We’ve only hosted one other performance in the past and it was so exciting to see how different visitors engaged with the artist and their actions. It’s a very special type of art process where you’re in the same room as the artist as they are performing in such close proximity.”

For more information and to RSVP to the free event at MOLAA, check out the Facebook event page here .