I fell in love with hoops after seeing the fly ladies, like Lauryn Hill and Mary J. Blige, in music videos wearing them. My best friend’s sister, Priscilla, who lived a few floors below me, wore a huge pair with her name inscribed inside their curves in the prettiest cursive. Her hoops dangled as she twirled her fingers on the curly cord of the phone. In my mind, she was the coolest.

When we rolled our necks they moved with the same attitudes we expressed. They bounced up and down when we played double dutch near our stoop. Gold hoops — thick, wide, bamboo-style, small or thin — were an extension of our sass, our style and us.

Like many Latinas, my mother took my sister and me to get our ears pierced when we were newborns. She proudly brought us to the local pharmacy on 137th Street and Broadway for the quick procedure, and once the holes healed she placed tiny hoops in them.

Over the years, my mother built up a collection of the lone hoops from the pairs that we had lost. Whenever I misplaced one, we’d sort through the loners for a suitable companion. Luckily it was the ’90s, and mismatch was sort of in.

I stopped wearing hoops when I was 17 years old. They didn’t make sense to me anymore. By the time I was a graduate student at Columbia University years later I was only wearing tiny studs. I felt that wearing large hoops would make me stand out, make me seem too loud, too visible, too ghetto, too black.

In 2016, Alegria Martinez, 21, a senior at Pitzer College, painted a mural on her campus that read, “white girl, take off your hoops!!!” She explained, in an email to the student body, “The culture actually comes from a historical background of oppression and exclusion. The black and brown bodies who typically wear hoops, (and other accessories like winged eyeliner and gold nameplate necklaces) are typically viewed as ghetto, and are not taken seriously by others in their daily lives,”according to the Claremont Independent. 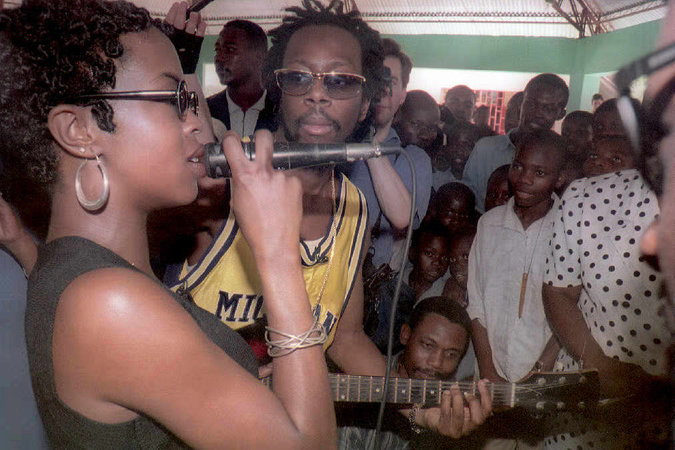 Lauryn Hill wearing hoop earrings in Jamaica in the ’90s.Credit

Online, a photo of the mural created a new front in the conversation about cultural appropriation on Twitter.

Ms. Martinez, the artist, wanted to make the point that black and brown people are often judged differently for how they dress. She insisted that the purpose of the mural was not to “police white women,” but rather use it as a form of education and conversation on the campus of her small liberal arts school. “White people can walk into conference rooms wearing hoops and it is still business attire. But if I did that, it is like I am bringing a ghetto aesthetic into the conference room,” she said.

Ruby Pivet echoed this same opinion in an essay for Vice titled,

“Hoop Earrings Are My Culture, Not Your Trend.”“White girls did not start the ‘trend’ of oversized hoop earrings and yet they’re the ones being praised for donning the ‘edgy’ style,” wrote Ms. Pivet.

André Leon Talley, a contributing editor for Vogue, sometimes includes hoops in the editorial photo shoots he styles and argues that although “the hoop earring is a beautiful ethnic symbol, it does not belong to black women but is a part of black culture.”

“In the 1960s and 1970s the hoop earring became associated with African beauty, when Nina Simone and Angela Davis started wearing the hoops,” Mr. Talley said. He made the point that Romani people also wore them.

Hoop earrings originated in Africa, dating back to Nubia, a civilization that existed in the fourth century in what is now present day Sudan, according to Yekaterina Barbash, associate curator of Egyptian art at the Brooklyn Museum. In ancient Egypt, both men and women wore hoop earrings. Egyptian royalty including queens and pharaohs like Nefertiti, Hatshepsut, Tutankhamen and Cleopatra wore gold hoops but it was more for style than for any other purpose.

For Egyptians, “earrings were seen as something that enhanced one’s beauty and sexuality,” said Ms. Barbash.

Egyptians that were not royalty were also buried wearing their hoop earrings, to enhance their beauty and appeal in their afterlife.

Jewelry designers today still pull from this idea. Jameel Mohammed is inspired by the influence of the African diaspora and designs with that in mind for his line, KHIRY.

According to Mr. Mohammed, it is harder to find a black model walking a couture fashion show than it is to find black style influences in fashion.

“Black style has to be contextualized differently in order to be seen as luxurious,” he said. “That is the fashion industry’s model of approaching nonwhite culture or things that are associated with nonwhite people.”

For Tracy Reese, one of Michelle Obama’s favorite designers, wearing hoop earrings has always been about personality, rather than racial identity.

“It is a bolder statement when I wear hoops,” she said. “I think it is more the size that says something different. Bigger hoop earrings could mean that a woman’s look is “more bohemian, more political,” she said. Tiny hoops, she reasoned, are more conservative.

When Ms. Reese was growing out her natural hair this past spring, she opted for bigger hoops to draw attention to her nape area.

“I think hoops usually get lost in big hair, big curls, with short hair they pop,” she said.

Last year, after I’d gone 12 years without wearing a pair of hoop earrings, a friend of mine casually mentioned she was going to buy a pair. It made me think about why I hadn’t worn mine. I nabbed a thin pair on sale at Ann Taylor Loft. They were delicate, small, not too showy.

The earrings quickly became a staple of my style. I owned trendy jacket earrings, studs, a flashy chandelier pair I bought in Mumbai, but once the hoops arrived the other earrings were relegated to my jewelry box.

When I gave up hoops, I was shedding. I didn’t want to hide my identity, but I didn’t want to wear it on my sleeve either. Earrings were easier to remove than my last name, my accent or my tendency to roll my eyes in dissent. But when I put my new hoops on for the first time, they embraced my face in a familiar way.

I upgraded to a bigger pair of hoops a month later.