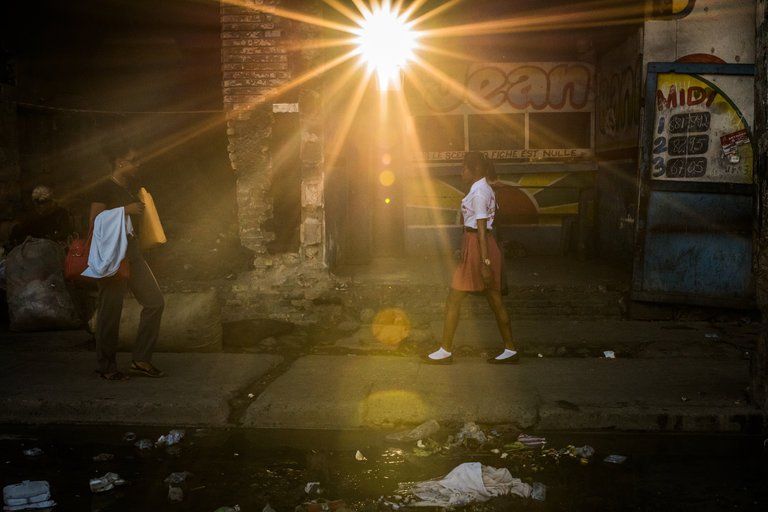 An Op-Ed piece by Tanael Joachim for the New York Times.

When I was growing up in Gonaives, Haiti, we didn’t have a toilet. We had a latrine, an outhouse in the back of our yard where we went to the bathroom. A literal “shithole.”

By Western standards of modernity, you could say the same of Haiti. Our roads aren’t great. Our politicians are corrupt. The late dictator Jean-Claude Duvalier, a.k.a. Baby Doc, stole hundreds of millions. His wedding famously cost $2 million. That was a lot of money in 1980. Today, the average Haitian lives on less than $2 a day.

I’ve witnessed extreme acts of violence in Haiti. But I’ve also encountered the most decent people I’ve ever met. I’ve seen a busload of people work together to help a woman in labor give birth on the side of a road. I’ve seen entire villages care for children as if they were their collective parents.

Like every other place on Earth, Haiti is of mixed character. It’s a place of extremes.

When I was in high school, we had a program called Alphabetization. High school seniors would volunteer to teach how to read and write to illiterate elders from the community. I participated in it during my senior year and taught many elders to joys of reading and math. Some of them were octogenarians, yet still had the desire to learn.

My favorite one, Rosemarie, was a lady in her 70s. She was hardheaded. But she had more enthusiasm than anyone else in class. One time, it took me an entire week to get her through a paragraph in the assigned textbook. It was hard; I almost lost my patience. But every day her eagerness got me through. Every time I was frustrated, she would say: “Met, map aprann li. Pa lagem.” (Teacher, I will get it. Don’t give up on me.)

I didn’t. We finally got through it. The next week, she cooked diri ak lalo— the best Haitian meal, don’t let anyone tell you otherwise — and brought it for me in class and thanked me profusely. It nearly brought me to tears. She was my Davos Seaworth and I was her Shireen Baratheon. It’s one of my most cherished memories, and I will take the grateful look on her face to the grave with me.

This is the place where I’m from.

I’m not going to give you a history lesson here, but there’s a short apocryphal story that illustrates the pride and sense of righteousness of Haitians. It goes like this: In 1939, when World War II broke out, Haiti, a pioneer of freedom, having led the most successful slave rebellion in the history of the world, joined the Allied forces and declared war on Nazi Germany. When that was reported to Hitler, he picked up a map to look for this presumptuous place he’d never heard of. He couldn’t find it. Suddenly, a fly flew from the map, revealing the small island nation.

We’re a tiny country, but we have the courage of a continent. Yet Mother Nature has tested us. I don’t believe the natural world has a conscience, I think we’re merely geographically unlucky. But sometimes it feels like natural disasters punish us as if we were a nation of reincarnated Nazis.

This is the place where I’m from.

I do a bit on stage sometimes where I say that Trump, in his incompetence, will turn America into a third world country. And I proceed to describe what it would be like for white people to do their own dirty work. It’s a world where cellphones are made by Kurts and Brocks, and white women are laboring under the sun picking their own pumpkins.

How do you think Haitians feel? Can you imagine the resilience it takes to live in an actual shithole?

Immigration by nature is about looking for better prospects, seeking what one doesn’t have in his or her own country. That is why I came to the United States.

And yet Haiti, for all its ills, has produced some of the strongest and proudest people on the planet. I’m a college dropout, English is my third language, yet I speak it better than the president of the United States who went to Wharton. Rosemarie, who learned how to read and write in her 70s, has more decency and compassion than the leader of the free world could ever imagine.