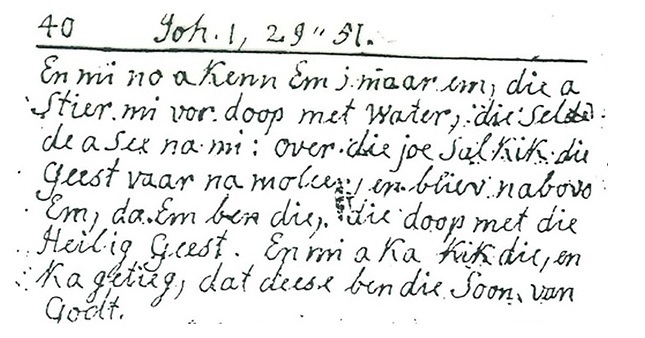 Virgin Islands Dutch Creole was a creole language spoken by African slaves and their descendents in the Danish West Indies (today: the US Virgin Islands) in the 18th and early 19th centuries. At the time, the Danish West Indies presented a highly multi-lingual environment. Many Dutch people had migrated to the Danish islands from the Dutch Windward Islands in the late 17th century. Formerly known as Negerhollands (Negro Dutch), Virgin Islands Dutch Creole actually drew not so much from Dutch (Hollandish) but rather from Zealandish and Flemish, as well as Danish, English, French, Spanish, African languages and perhaps Papiamentu.

The Netherlands Graduate School of Linguistics (LOT) in Utrecht has recently published two new books on Virgin Islands Dutch Creole, both based on PhD dissertations.

Description from the publisher:

Virgin Islands Dutch Creole did not exist before 1672 and was mentioned for the first time in 1736. In the following decades Moravian and Lutheran missionaries started a tradition of translating Christian texts into this new language of the Danish Antilles (US Virgin Islands). On the surface of it, these texts look bookish, influenced by missionary jargon, Dutch-like, and perhaps even artificial. This dissertation studies the authenticity of Virgin Islands Dutch Creole texts from a philological perspective. First, it focusses on early influence of the first colonists, on the appearance of uncertainties and inconsistencies in early texts and on metalinguistic information. An important starting point is the analysis of the Moravian Mission’s speakers community by using Bell’s Audience Design Model. Second, five case studies, using the digital Clarin-NEHOL-corpus, present insight into the links of the writers/translators with their audience of Creole speakers, their background, and religious traditions. The third part of this work is dedicated to early twentieth century fieldwork in which spoken Creole was recorded.  Metalinguistic comments and study of the fieldwork practices show that the study of this material also benefits from a philological approach.

Description from the publisher:
The available [Virgin Islands] Dutch Creole data cannot always be easily compared among each other. The language as spoken by those of African descent has only been directly documented in the late nineteenth and early twentieth century. In the eighteenth century, Dutch Creole was primarily documented by missionaries, who had learnt and adapted the language for their own purposes. This dissertation takes advantage of the digital availability of the Dutch Creole data to address the issue of variation in all data sources: eighteenth century missionary data as well as twentieth century data of speakers of African descent. This dissertation explores system-internal and cross-system variation of tense, modality, and aspect markers, benefiting from their highly language-specific profile for investigating and comparing closely related language varieties where the linguistic background of the language user plays an important role, as is the case for Dutch Creole. Features investigated include past time reference marking, imperfective, prospective, perfect, and completive aspect, and modality, taking all language varieties present in the multilingual Danish West Indies context into account: seventeenth century and contemporary Dutch, English, German, Danish, and West African languages as Akan, Ewegbe, and Ga.

The above image shows the biblical text John 1:33-34 handwritten in Virgin Islands Dutch Creole from a document that was used for Moravian missionary purposes in the Danish West Indies. Image credited to Cefas van Rossem.