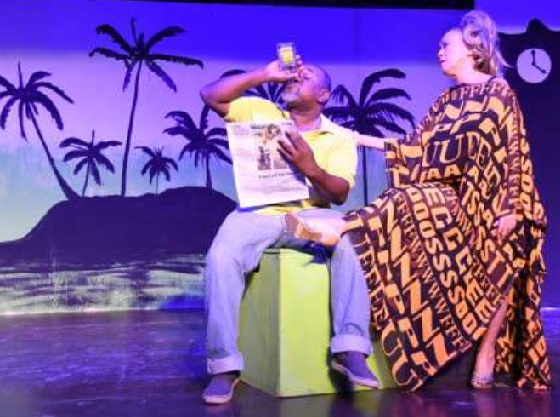 The Jamaica Observer reminds us that an international poll once named Jamaicans among the happiest people in the world and that “there is definitely a reason for that.” The article reviews David Tulloch’s musical revue, Jamaica Sweeter, now playing at the Phoenix Theatre in New Kingston, Jamaica.

Despite the crime and mayhem, there is an innate sense of humour possessed by the Jamaican people. It is that side of Jamaica, which is captured in David Tulloch’s latest production, the musical revue Jamaica Sweeter, which is now playing at the Phoenix Theatre in New Kingston.

In the true sense of a revue, Tulloch utilises a series of short sketches, songs, and dances, to showcase slices of life heavily doused with comedy. To move the sketches along Tulloch has assembled a cast that is a brilliant mix of seasoned and emerging talent. Ricky Rowe, Teri Salmon and Luke Ellington are the tried and true campaigners, who are joined by Samantha Brevett, Sabrina Thomas and the impressive Derrick Clarke.

Clarke has had stints in the National Pantomime but makes his way into commercial theatre and gives a good account of himself. But it is Rowe who is the real standout in this cast.

He would have last made an impact on Jamaican audiences in 2015 when he played opposite Tony “Paleface” Hendricks in the Scarlett Beharie produced Samson and Di Liar. Then like now he captured audiences with his strong sense of comedic timing as well as the ability to lose himself in a character. In Jamaica Sweeter Rowe becomes a different person in each sketch, from the ‘inexperienced’ newly wed, an all-nagged-out husband, the stammering friend and the large and in charge police Sergeant. For each character Rowe was able to create traits and idiosyncrasies which make them memorable.

Salmon’s over-the-top characters are befitting her street and the choreography will remind many of her early start as a dancer in the National Pantomime.

Topical issues such as the police ‘sick out’ make its way into the sketches, giving currency to the work and ultimately gives the audience something to hold on to. This connection between players and audience is at times lost during some of the musical numbers as the cast performs to a pre-recorded track and often opt to lip sync.

This is one of the few lapses during the two-hour production. In other cases Tulloch goes for popular storylines with punchlines already familiar, the effect is therefore lost as the comedic moments are seen coming. But luckily they are few and, therefore, Jamaica Sweeter is a decent watch.