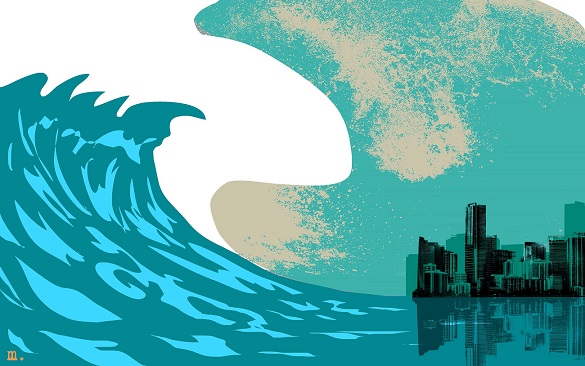 The climate is warming and the water is rising. In his new book—The Water Will Come: Rising Seas, Sinking Cities, and the Remaking of the Civilized World (2017)—Jeff Goodell argues that sea-level rise will reshape our world in ways we can only begin to imagine. “The year is 2037. This is what happens when the hurricane hits Miami.” See an excerpt of his book below (very disturbing, to say the least):

After the hurricane hit Miami in 2037, a foot of sand covered the famous bow-tie floor in the lobby of the Fontainebleau Hotel in Miami Beach. A dead manatee floated in the pool where Elvis had once swum. Most of the damage came not from the hurricane’s 175-mile-an-hour winds, but from the twenty-foot storm surge that overwhelmed the low-lying city.

In South Beach, historic Art Deco buildings were swept off their foundations. Mansions on Star Island were flooded up to their cut-glass doorknobs. A seventeen-mile stretch of Highway A1A that ran along the famous beaches up to Fort Lauderdale disappeared into the Atlantic. The storm knocked out the wastewater-treatment plant on Virginia Key, forcing the city to dump hundreds of millions of gallons of raw sewage into Biscayne Bay.

[. . .] Still, the waters kept rising, nearly a foot each decade. Each big storm devoured more of the coastline, pushing the water deeper and deeper into the city. The skyscrapers that had gone up during the boom years were gradually abandoned and used as staging grounds for drug runners and exotic-animal traffickers. Crocodiles nested in the ruins of the Frost Museum of Science. Still, the waters kept rising.

By the end of the twenty-first century, Miami became something else entirely: a popular diving spot where people could swim among sharks and barnacled SUVs and explore the wreckage of a great American city. [. . .]

For more on the book, see https://www.hachettebookgroup.com/titles/jeff-goodell/the-water-will-come/9780316260244/