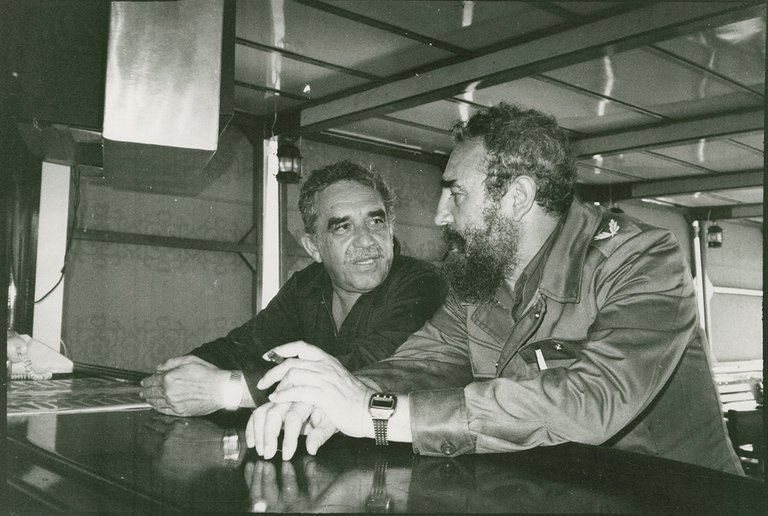 A report from Jennifer Schuessler for the New York Times.

When Gabriel García Márquez’s archive was sold to the University of Texas two years ago, some decried the fact that the literary remains of Latin America’s foremost novelist — and a fierce critic of American imperialism — had come to rest in the United States.

But now, the university’s Harry Ransom Center has digitized and made freely available about half of the collection, making some 27,000 page scans and other images visible to anyone in the world with an internet connection.

The online archive, which is cataloged both in English and in Spanish, includes drafts and other material relating to all of García Márquez’s major books, including “One Hundred Years of Solitude,” which turned the Colombia-born writer into a global figure. There are also previously unseen photographs, notebooks, scrapbooks, screenplays and personal ephemera, like a collection of his passports.

Many archives are digitizing their holdings. But to make so much material from a writer whose work is still under copyright freely available online is unusual.

“Often estates take a restrictive view of their intellectual property, believing scholarly use threatens or diminishes commercial interests,” Steve Enniss, the director of the Ransom Center, said. “We are grateful to Gabo’s family for unlocking his archive and recognizing this work as another form of service to his readers everywhere.”

Seeing some items in the archive, which the Ransom Center bought for $2.2 million, will still require a trip to Texas. The digital collection does not include any of the 10 drafts of García Márquez’s final, unfinished novel, “We’ll See Each Other in August.” (One chapter of the novel was published in the Spanish newspaper La Vanguardia in 2014, shortly after García Márquez’s death at age 87; the estate said via email that it has no further plans for publication.)

But online readers can access a 32-page draft section of the projected second volume of García Márquez’s memoirs, which would have covered the years after he moved to Europe and then Mexico City, where he wrote “One Hundred Years of Solitude” and lived until his death. They can also use a special viewer to make side-by-side comparisons of different drafts of various works as they evolved.

Alvaro Santana-Acuña, a sociologist at Whitman College who is working on a book about the history of “One Hundred Years of Solitude,” said the archive was already helping to explode some of the legends surrounding the novel, many of which were carefully crafted by García Márquez himself.

The novelist, who won the Nobel Prize in 1982, had often spoken of the book as pouring out in a kind of magical trance. “I did not get up for 18 months,” he later said.

But in fact, Mr. Santana-Acuña said, correspondence in the archive shows that he regularly sent out sections for reactions from friends and literary critics. He also published about a third of the chapters in newspapers around the world before the book’s publication, and sometimes made adjustments according to audience reaction, much as 19th-century writers like Charles Dickens would.

“He published the most important chapters, to make sure he knew what different audiences — ordinary readers, literary critics, the intelligentsia — thought,” Mr. Santana-Acuña said.

García Márquez, like many writers, claimed not to bother much with reviews, especially negative ones. But the archive includes a number of scrapbooks which carefully compile — and sometimes privately respond to — reviews of his work in many different languages.

Mr. Santana-Acuña said he was particularly amused by a notation on a second review of “One Hundred Years of Solitude” that appeared in the conservative Colombia newspaper El Tiempo, which had initially dismissed the novel as badly written left-wing propaganda.

“Al menos por larga y entusiasta!” García Márquez (who in the 1950s had written for a rival Colombian newspaper) wrote of the second effort — “At least it’s long and enthusiastic!”