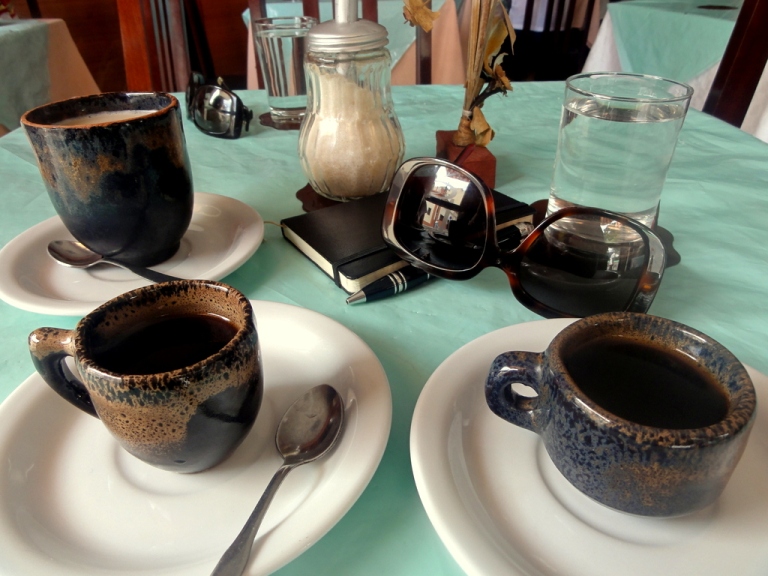 A report by Raul Menchaca for Xinghua.

On the slopes of the Sierra Maestra Mountains in Cuba, at altitudes higher than 500 meters above sea level, coffee plantations are receiving a different kind of attention today.

The Coffee Roads project has been promoted since 2014 by the city authorities of Santiago de Cuba, with aspirations to make it a tourism high point. They hope to take advantage of the long coffee tradition in these mountains, where French settlers arrived at over 200 years ago.

The Coffee Road is intended to be a catalyst for knowledge, promotion, and dissemination of the values of the local coffee culture, within the Cuban national context, archaeologist Yumara Lopez, coordinator of the project, told Xinhua.

This program is co-financed by the European Union, the Franco-Belgian Malongo Foundation and the city’s conservation office in a joint effort to rescue a tradition born in the area after the Haitian Revolution (1791-1804), which abolished slavery in Haiti.

The triumph of the slave rebellion caused hundreds of French settlers to flee from Saint Domingue, now Haiti, to Santiago de Cuba, where they continued the planting and harvesting of the coffee bean, creating over 600 farms in the eastern mountains.

“The mountains surrounding the city were rapidly populated with coffee plantations and their production was a driving force of local development,” said Lopez, without hiding her passion for the topic.

Lopez pointed out that this process changed the city in a few short years due to the influx of wealth.

Very little is left of the coffee farms today, although the city’s department of archaeology, led by Lopez, has identified the location of more than 170 of them by reviewing old deeds.

These agricultural emporiums make up the “Archaeological Landscape of the First Coffee Plantations in Southeast Cuba,” declared by the United Nations Educational Scientific and Cultural Organization as World Heritage of Humanity in 2000.

Among the group, some farms stand out, including La Fraternidad, which is currently being restored, and La Isabelica, which is now a unique museum chronicling the coffee tradition and the French cultural heritage in the area.

The Isabelica was the first museum founded by the government of Fidel Castro after the triumph of the revolution in January 1959 and is the result of the efforts of the historian Fernando Boitel.

La Fraternidad and La Isabelica are separated by 80 km of mountainous terrain but are the pillars of the Coffee Roads project.

“The aim is to promote these cultural spaces and manage them so the associated communities could receive practically immediate economic benefits,” said Lopez.

Another pillar of the project is the Dranguet House, constructed between 1859 and 1861 by Carlos Dranguet, a landowner descended from French settlers who fled Haiti for refuge in Cuba.

Casa Dranguet, located just one block from the central Cespedes Park, is the headquarters of the project as well as housing the Center for Interpretation and Dissemination of the Coffee Cultural Heritage.

In addition to owning a peculiar museum and its scientific work, the institution has an important social role with the organization of cultural events, and of course, the preparation and sale of coffee.

The constant aroma of coffee infused into the locale blends with art and science to create the essence of the Coffee Road project.