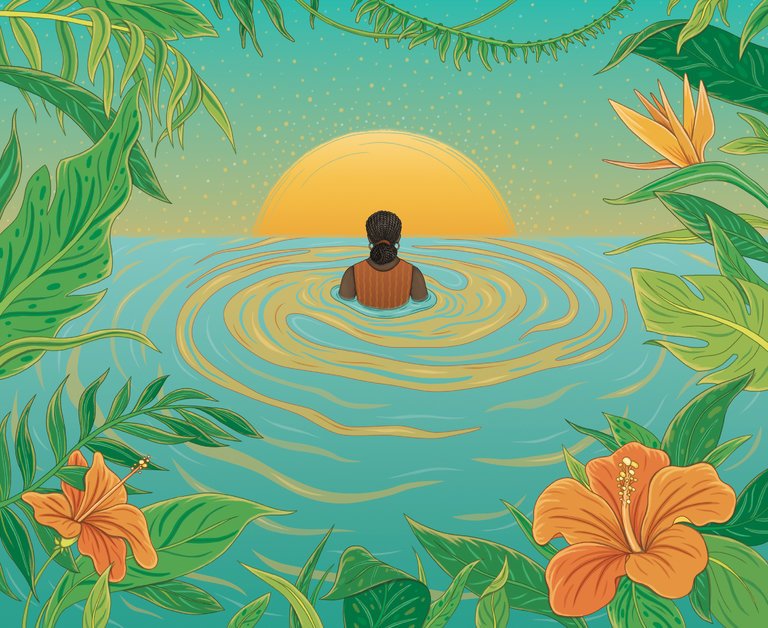 A travel piece by Edwidge Danticat for the New York Times.

I WAS HEADING to Grenada at the same time that the island was hosting the State of the Tourism Industry Conference, one of the region’s largest gatherings on the subject. Though the conference was planned before Hurricanes Irma and Maria devastated many Caribbean islands whose economies rely heavily on tourism, the timing seemed prescient. Indeed, on the conference program I scrolled through on the plane were discussions focused on disaster preparedness as well as recovery and rebuilding. I was not going to the conference though, because I am not a tourism expert.

The people sitting on either side of me on the plane were not tourism experts either. They were tourists, two young American couples on their honeymoons. After listening to them exchange wedding stories, I turned to the poet and essayist Audre Lorde’s “Grenada Revisited: An Interim Report,” an essay she wrote a few weeks after the 1983 United States’ invasion of her parents’ homeland.

I had read Lorde’s essay many times before — it’s the last chapter of her seminal 1984 collection “Sister Outsider”— but I wanted to read it again before seeing Grenada for the first time.

That we landed at Maurice Bishop International Airport, which is named after the former Prime Minister of Grenada who was assassinated six days before the start of the U.S. invasion, might have intrigued Lorde. I felt her begin this journey with me as I walked down the airplane steps, the sun that is only this sparkling bright in the Caribbean, beaming down on my face.

“The first time I came to Grenada I came seeking ‘home,’” began Lorde’s essay of her 1978 visit. She had flown into the now closed Pearl’s Airport in Grenville on the northeastern coast of the island. Back then, there was one paved road, she reported. Now, there are many smooth and winding ones through lively neighborhoods as well as tree-covered hills.

Among Lorde’s most striking recollections was seeing Grand Anse Beach, not the hotel-lined miles of white sand that attract both locals and tourists, but the busy thoroughfare that runs alongside it.

She saw: “Children in proper school uniforms carrying shoes, trying to decide between the lure of a coco palm adventure to one side and the delicious morning sea on the other.”

I, too, saw children, dozens of them on either side of the street one morning. Most of the children wore traditional uniforms, white shirts and blouses and plaid skirts or dark or khaki shorts or pants. They huddled together chatting and giggling, not paying attention to the dark blue sea on one side or the colorfully painted houses and buildings in the hills on the other. These children reminded me of children you would see heading to school in my native Haiti, or most other Caribbean islands, their range of black and brown skin glistening in the sun. The older ones kept their younger siblings at their side, even as they climbed into public transportation minivans and buses.

I went in search of more of those “vivid images” in Lorde’s essay and, besides the school children at Grand Anse Beach, there was Fat Woman-Who-Fries-Fish-In-The-Market. I did not see her inside the turquoise-and-white square building downtown. She was not standing near the massive fish laid out on slabs waiting to be gutted. Nor was she by the smaller ones piled into buckets out front.

The fish market smelled predictably like the sea. The buzz of the customer and buyer exchanges was a lot more subdued than I expected. Not all the vendors had customers. The market’s relative calm on a Friday afternoon reminded me how small Grenada is. The island is 120 square miles and has about 100,000 residents.

That night while pondering all this in my hotel room at the Coyaba Beach Resort, I parted the curtains and looked for a full moon to turn the beach outside “flash green.” October is perhaps the wrong time of year for this. Lorde had seen the sand turn green in April. There was no full moon, but I slept with the sliding door to the terrace open so I could hear the waves gently grazing the shore.

I AM NOT A GOOD TOURIST. I can easily evoke for myself the worse case scenario in any type of travel situation. I have immigrant guilt about taking time off. I am a bad swimmer. I am self-conscious in bathing suits, so most of my tourism is done through books. But because of my writing, I am invited to quite a few places and whenever I can I go.

I was in Grenada, which was largely unaffected by the hurricanes, to receive an honorary degree from the University of the West Indies Open Campus. Unlike U.W.I.’s brick and mortar campuses, the Open Campus is a virtual one. The 657 students in my graduating class hailed from all over the English-speaking Caribbean. They earned their degrees online. Only 139 graduates would cross the stage though.

Not all the graduates always travel to the Open Campus ceremonies, my hosts from the University of the West Indies told me. However, this year there were students who wanted to come to their graduation in Grenada but could not. Most of the graduates travel from other countries for the Open Campus ceremony, which takes place in a different location each year. Many had homes that were damaged or destroyed. Some lost loved ones along with everything they owned.

I was told the story of one graduate from Trinidad who stayed home because she had donated her plane ticket money to relief efforts in Dominica, which has U.W.I.’s most devastated campus. Some of the students from that campus are still unaccounted for.

Hurricane Maria struck Dominica, the southernmost of the Leeward Islands as a Category 5 storm on Sept. 18. Dominica’s Prime Minister, Roosevelt Skerrit, whose own roof collapsed during the storm, later told CNN: “Our agriculture sector is 100 percent destroyed. Our tourism is, I would say, about 95 percent destroyed.”

In front of the supermarket across from the Coyaba Beach Resort were blue barrels lined up to collect food and other urgently needed supplies for Dominica. At The Beach House Restaurant, just north of the airport, where I attended a pre-graduation cocktail party the night before the ceremony, the young female singer entertaining us with classic soul, as well as Caribbean covers, reminded everyone to drop something in the basket that would usually hold her tips. This time the funds would go to Dominica.

I have never been to Dominica but now I wish I had. This is not just born out of a desire to see a place “before.” Before the devastation, before the storm. I am from a place, Haiti, that constantly evokes nostalgia in the people who have seen it, lived in it, and loved it “before.”

This longing for before always saddens me because it makes the present seem even worse. But I still wish I had seen Dominica before, in part because it is the birthplace of one of my favorite novelists, Jean Rhys. The places that Antoinette, Rhys’ doomed narrator in “Wide Sargasso Sea,” longs for have flaming sunsets and rivers so clear that you can see the pebbles at the bottom. They have moss-covered gardens filled with orchids, hibiscus and flamboyants, which are illuminated at night by fireflies.

This is one of the ways I have imagined Dominica, along with what I have seen in travel guides: its high mountain peaks, forts, lush rain forests, reefs, gorges, lakes and water falls.

Dominica is also home to Xuela Claudette Richardson, the narrator of Jamaica Kincaid’s novel “The Autobiography of My Mother.” At 15, Xuela was taken by her father to Roseau, the capital of Dominica. Roseau, Xuela finds — like a lot of places in the Caribbean — “had a fragile foundation, and from time to time was destroyed by forces of nature, a hurricane or water coming from the sky as if suddenly the sea were above and the heavens below.”

“THE SECOND TIME I came to Grenada,” Audre Lorde wrote in “Grenada Revisited,” “I came in mourning and fear that this land which I was learning had been savaged, invaded, its people maneuvered into saying thank you to their invaders.”

Lorde’s second visit was in late 1983, after then U.S. president Ronald Reagan had deployed Marines to the island. Reagan declared that he wanted to prevent a “Soviet-Cuban” colony from taking root in Grenada and protect American citizens on the island, many of whom were students at St. George’s University School of Medicine.

I visited St. George’s University, whose students and officials, Lorde pointed out, later denied that they were ever in danger. The school, which is no longer just a medical school, but also covers other disciplines, is an island unto itself, with its many salmon-colored buildings, massive water tanks, security personnel and buses. All over the campus are breathtaking views of True Blue Bay, the point where the Caribbean Sea and the Atlantic Ocean meet.

If Reagan was so interested in seeing democracy flourish in the Caribbean, Lorde wondered, why did the U.S. government support Haiti’s Jean-Claude Duvalier and his repressive regime? She also mentioned Puerto Rico.

In 1897, she wrote, “U.S. Marines landed in Puerto Rico to fight the Spanish-American War. They never left.”

Puerto Rico was as devastated by Hurricanes Irma and Maria as Dominica, Barbuda and the U.S. Virgin Islands. I have not been to Puerto Rico either. I have only visited it in books, particularly through the eyes of young Esmeralda Santiago in her memoir, “When I Was Puerto Rican.”

I imagined the guavas that she taught me and other readers to eat at the beginning of her book being no longer able to grow, the fields they came from deep in the countryside flattened, and the families that farmed them struggling to stay alive without food or clean water.

I watched an interview with the tireless mayor of San Juan, Carmen Yulín Cruz Soto, and heard echoes of Audre Lorde in her voice.

“There is nothing that unites people more anywhere in the world than injustice,” the mayor said. “We have to get food, we have to get water or else we are being condemned to a slow death. It may be easy to try to disregard us. It may be easy because we are a U.S. territory and a colony of the United States. But we’re a people, damn it.”

The blessings of our islands are also our curse. Our geography gives us year-round sun and beautiful beaches, but more and more in the age of climate change, we are on the front line of destruction.

“We are a people” seems to be what we have been saying for generations to all our colonizers and invaders who seemed intent on destroying us. And now more than ever, Mother Nature, too.

We are a people, the Arawaks and Taínos might have said, even as they died trying to prove it. We have even inherited the word for hurricane, huracán, from them.

“Much has been terribly lost in Grenada,” Lorde wrote at the end of her 1983 visit, “but not all — not the spirit of the people.”

THE SPIRIT of the people is also captured in this poem I have been carrying with me for years before coming to Grenada. It was written by the Grenadian poet and short story writer Merle Collins.

“We speak,” she wrote in “Because the Dawn Breaks,” “for the same reason that the thunder frightens the child

that the lightning startles the tree …”

The people of the Caribbean speak, the poet wrote, because we “were not born

to be your vassals.”

2 thoughts on “Edwidge Danticat: Dawn After the Tempests”