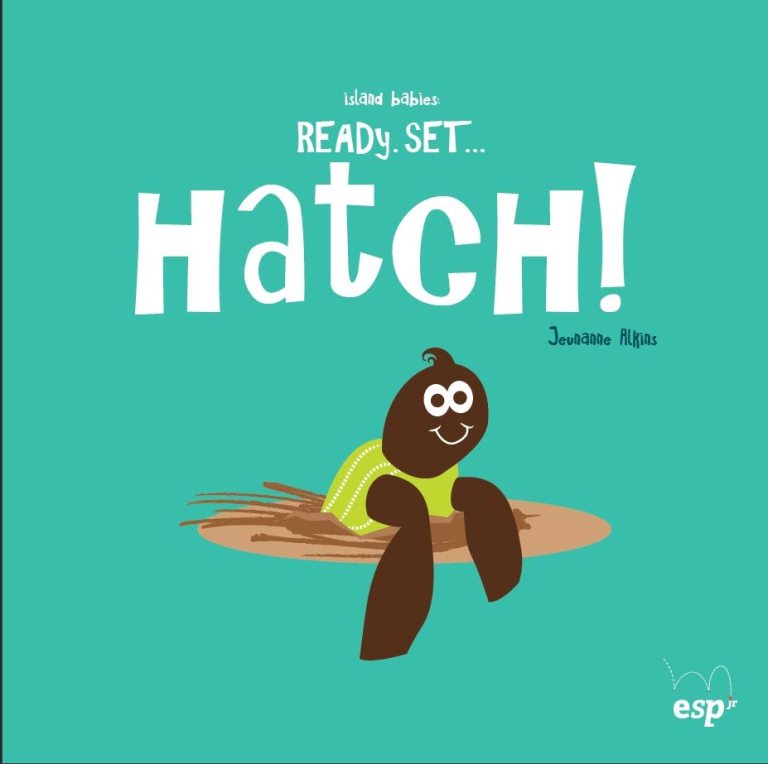 A report by Julian Neaves for Trinidad’s Newsday.

Last December children’s author Jeunanne Alkins was informed she was one of the nominees for best children’s story prize in the ALAS-Inter-American Development Bank (IDB) awards for her 2014 book Ready, Set…Hatch.

Last week she learned she was a finalist when friends told her congratulations after seeing the news in a Newsday article.

Sunday Newsday spoke with Alkins about the nomination and her projects during an interview last at her shared studio in Woodbrook.

The IDB, under president Luis Alberto Moreno, partnered with Colombian recording artiste Shakira and the ALAS Foundation to recognise those involved in early childhood education through the ALAS-IDB awards. The categories are best centre, best children’s story, best innovation and best educator.

Alkins’ illustrated story Ready, Set…Hatch is about Hatch, an ambitious and inventive turtle’s struggle to reach the sea, along with millions of baby leatherback turtles. Alkins said she was very overwhelmed and shocked when she was told about the nomination last year.

She said the success of Ready, Set…Hatch when it was released in 2014 put pressure on her and even more expectation. After the nomination she participated in an interview process around December last year but was barred from telling anyone about the nomination. She recalled her early conversation with IDB representatives and how they wanted to transform early childhood education.

“I was finally talking to people who speak my language.”

Alkins said she always wondered how people outside of the country would respond to her work and she was pleased that the international early childhood education panel was able to draw a number of lessons from her book. She gave the example of a picture with a map showing the migration of the leatherbacks from Canada to the Caribbean. She was told this could help children see how they fit in the world and provide a sense of place. She said they were able to see all the work and research they put into the project.

“(It is) nice to hear your work dissected by international people.”

She reported since the Newsday article about her being an ALAS-IDB finalist she has been bombarded with congratulations and the response has been really great. She also reported she was the first finalist from this country and from the English-speaking Caribbean.

She expressed hope the IDB recognition will help breakdown some of the gate keeping doors. She also expressed hope that the right funding will go behind projects and people will see it is not only about proving commercial profitability.

“I really hope the international recognition will shift our value system to understanding that societal good is important in business as well.”

She said when she reads Ready, Set…Hatch in schools the children declare they want to save the turtles. She added that when she does a reading most of the children are familiar with the book already. She said that twice parents have written to her asking her to write another book because they are fed up of reading it over and over.

Alkins will be attending the awards ceremony in Washington on November 9. She said that win or lose it was a very pivotal point in her children’s content career. “I feel like I won already.”

She is also planning to do some new Ready, Set…Hatch merchandise for Christmas including buttons and they are also planning international distribution. Alkins also reported her book Most Magnificent, where the buildings of the Magnificent Seven are anthropomorphised, should be read for Bocas Lit Fest next year.

Her children’s animated series The Adventures of Bim and Bam, which is about five and a quarter year-old twins who get caught up in ridiculous adventures while on vacation with their family and encounter various wildlife characters, will be featured at the annual Animae Caribe animation festival from November 21-25. She announced they are changing the format from 22 minute episodes to three minutes web episodes.

They are also working on structuring the series so it is universally applicable.

“(It is about) how to get the content ready for a global stage.”

Ready, Set…Hatch is available on Amazon.com. And for more information you can check her company Island Babies on Facebook @islandbabieshq which is also their social media handles.