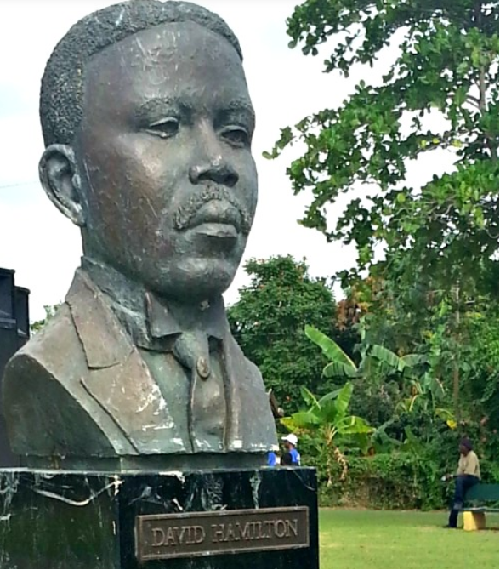 Due to the impact of Hurricane Maria on the island of St. Croix, activities set for the annual Liberty Day, affectionately called “Bull and Bread Day” and held on November 1st of each year, is cancelled, according to the Grove Place Action Committee, which organizes the cultural event. David Hamilton Jackson [see above] was an activist and civil rights leader who successfully petitioned the Danish government for the repeal of a 1779 law, which prohibited independent newspapers and enforced strict censorship on all publications in the territory. He then established the first free newspaper in the, then, Danish West Indies (now U.S. Virgin Islands), The Herald. The Virgin Islands Consortium reports:

“We do apologize to our community who look forward to Liberty Day event each year. Unfortunately, due to severe damage to the facility used for serving the ‘bull and bread’, the unavailability of individuals who provide assistance in pulling this monumental occasion together, funding and for other reasons, a determination was made to cancel this year’s celebratory activities,” said Raymond Williams, president of the committee.

The cancellation was the first since the event began over 30 years ago, Mr. Williams made known. “I can assure the community that we will be back next year with all the fanfare and zeal as in the past,” he said. Mr. Williams encouraged the community to do “personal introspection” in remembrance of David Hamilton Jackson.

According to his biography, Mr. Jackson, born in 1884 and lived until 1946, was a civil rights leader in the U.S. Virgin Islands. At the time of his birth, the territory was under the rule of the Danish West Indies, and Mr. Jackson was an important figure in the struggle for increased civil liberties and workers’ rights on the islands.

He petitioned for freedom of the press, was involved in the territory’s labor movement, and, when the Danish West Indies became the U.S. Virgin Islands in 1917, he lobbied for citizenship for the islanders.

Mr. Jackson worked as an educator and later a bookkeeper before becoming involved in the politics of the Danish West Indies. He traveled to Denmark and successfully petitioned for the repeal of a 1779 law, which prohibited independent newspapers and enforced strict censorship on all publications in the territory. Upon returning home, he established the first free newspaper, The Herald. The date of this event, November 1, is celebrated as an annual public holiday. Another one of his great achievements was the formation of the first labor union in the Danish West Indies, which Mr. Jackson accomplished with help from Ralph Bough.