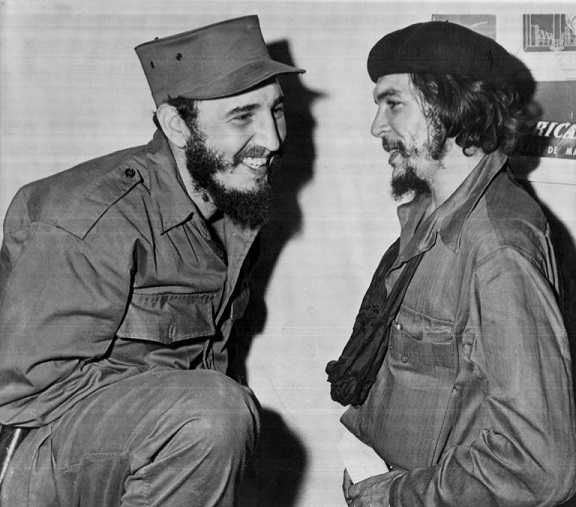 The New York Times’ Peter Baker asks, “How much does it cost to knock off a foreign leader? In 1964, the asking price to assassinate Cuba’s Fidel Castro was $150,000.”

The Cuban exiles who were willing to pay felt that “was too high” and countered with $100,000 to seal the deal. As a bonus, the businessman who offered to arrange the assassin services also agreed to bump off Raúl Castro and Che Guevara for another $20,000 each — plus $2,500 for expenses, of course.

The haggling between Cuban exiles and criminal figures was recounted in a July 4, 1964, memo by the F.B.I. that was marked “SECRET” and released in full on Thursday as part of a stash of files related, if sometimes only theoretically, to the assassination of President John F. Kennedy. In the end, of course, whatever came of the plot did not put either of the Castros or Guevara in the ground.

But that memo and many of the 2,800 once-secret documents that were made public harken back to an era of Cold War intrigue and spy-versus-spy contests, when assassinations and clandestine plots were a matter of tradecraft, not John le Carré novels. Some real, some fanciful, the schemes and stories contained in the newly divulged files help explain the backdrop against which the Kennedy killing stirred suspicions that persist to this day. “It was a very different time, and you have to remember the context,” said Larry J. Sabato, the director of the Center for Politics at the University of Virginia and the author of “The Kennedy Half-Century,” published in 2013. “Almost everything revolved around this bipolar system we had” between the United States and the Soviet Union. Mr. Sabato had 22 student volunteers combing through the documents this week, searching for more about Lee Harvey Oswald, Jack Ruby and many other characters from the drama. “What I’ve learned so far is you can’t understand the Kennedy assassination or the Kennedy presidency or Oswald unless you understand the ’50s and early ’60s,” he said.

The documents were released under a 1992 law requiring all files related to the assassination be made public by Oct. 26, 2017. But after intense, last-minute lobbying by the C.I.A. and the F.B.I., President Trump agreed to hold back one last batch pending an additional six-month review to ensure that nothing released would damage national security. Mr. Trump told the agencies that any redactions should be exceedingly rare, given the time elapsed.

“JFK Files are being carefully released,” he wrote on Twitter on Friday. “In the end there will be great transparency. It is my hope to get just about everything to public!”

On Friday night, he tweeted that he would “be releasing ALL JFK files other than the names and addresses of any mentioned person who is still living,” adding that it would be “to put any and all conspiracy theories to rest.” As a result of his action on Thursday, most of what was posted on the website of the National Archives and Records Administration was not entirely new. Just 53 of the 2,891 documents had never been released before. The rest had previously been released, with some information blacked out, and were made fully public on Thursday.

That means about 3,000 documents remain secret in their entirety, and about 27,000 others remain partly hidden. Under Mr. Trump’s order, those should be released in full by April 26 unless the intelligence agencies make a compelling case to withhold portions of them.

Historians who have examined many of the documents released this week said they have not found much that would drastically change their understanding of the Kennedy assassination. But these files, along with another batch made public in July, reinforce existing narratives, raise further questions or add additional details and context to story lines that were previously part of the record.

In particular, the historians said, the documents help flesh out the backdrop for the shooting that felled the young president in Dallas on Nov. 22, 1963, and the blizzard of conspiracy theories that followed.

At the center of the superpower standoff was Cuba, then as now a Communist beachhead 90 miles from the United States and an obsession for Kennedy and his brother Attorney General Robert F. Kennedy. Seared by the fiasco of the Bay of Pigs incursion and leery after the nuclear near miss of the Cuban Missile Crisis, the Kennedys spent much of their time in power exploring ways to counter and possibly topple Fidel Castro.

One document included in the July release outlined a proposal to cause food shortages in Cuba as part of Operation Mongoose, the Kennedy administration project to remove Castro from power. The plan called for introducing untraceable biological agents to destroy crops in Cuba, leading to widespread hunger that could set off a revolt against Castro.

According to the memo, Kennedy’s national security adviser, McGeorge Bundy, “said that he had no worries about any such sabotage which could clearly be made to appear as the result of local Cuban disaffection or of a natural disaster, but that we must avoid external activities such as the release of chemicals, etc., unless they could be completely covered up.” Like many of the plans, there is no evidence that it was ever executed.

The $100,000 plot to assassinate Castro as outlined in the 1964 F.B.I. memo was not a government effort — at least not advertised as such — but an account of meetings supposedly held between Cuban exiles and businessmen with ties to organized crime. There were many assassination plots against Castro in this era, and while people suspected of participating denied involvement when interviewed by the F.B.I., it was noted that Cuban exiles never had a conversation “without someone expressing a desire to kill Fidel Castro.”

The Cuba fixation helps explain the intense interest in Oswald’s trip several weeks before the Kennedy assassination to Mexico City, where he contacted the Cuban Consulate, a longstanding source of curiosity on the part of scholars and theorists. Handwritten notes report a tip that Oswald was accompanied by “El Mexicano,” believed to be Francisco Rodriguez Tamayo, the captain of Cuban Rebel Army 57 until he defected to the United States.

The C.I.A. was so determined to hide the fact that it was wiretapping the Cuban Consulate that it failed to cooperate fully with the Warren Commission that was investigating the assassination. An unsigned handwritten 29-page document, made for a later House select committee, underscored longstanding conclusions that the C.I.A. stonewalled to disguise its surveillance in Mexico City. “It is indicative of an attitude on the Agency’s part to unilaterally determine the substance of CIA-generated information to be provided to the Warren Commission,” the document said.

Gerald Posner, the author of “Case Closed,” a book that concluded that Oswald really was the lone killer, said the latest documents may not offer any bombshell. But, he said, they underline and expand on the history of that event and that era. “The focus on what is new in the released files is so intense,” Mr. Posner said, “that sometimes it is possible to miss how richly some of the documents fully develop important themes in assassination history.”

2 thoughts on “In J.F.K. Files, a Peek Back at an Era of Secrets and Intrigue”