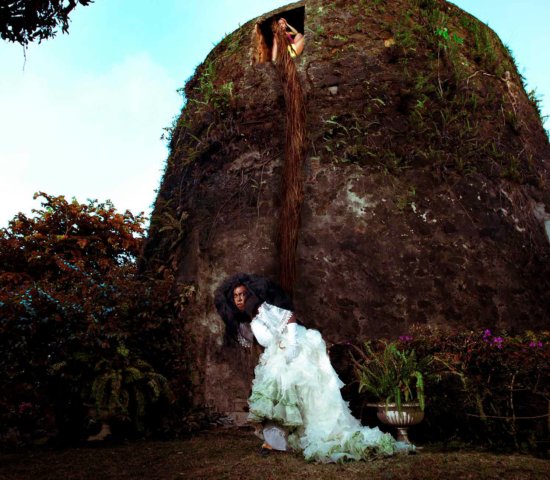 A report by Nelcia Charlemagne for the St. Lucia Star.

Daughter of the soil, artist and photographer, Fiona Compton has enlisted a group of Caribbean creators to embark on a film and storytelling project. According to Compton, “This 100% Caribbean initiative from start to finish is all about telling the stories of our unknown heroes.” With the help of Saint Lucians and Trinidadians including Kimberly Charlery, Robert Young, Darcel de Vlugt and Muhammed Mukakil, Compton sought to recreate ‘Alice in Wonderland’, ‘Snow White’, ‘The Wizard of Oz’ and ‘Rapunzel’.

Where ‘The Revolution of the Fairytale’ differs from other Caribbean retellings is that it does not simply replace the plot with an all black or West Indian cast. Instead, there is purposeful and skillful highlighting of unsung or even unknown Caribbean heroes who fought along our long journey to freedom as a West Indian community.

‘Alice in Wonderland’ features the adaptations of black Caribs, and a female ‘mad hatter’. In ‘Snow White’ the lead character is embodied through Trinidadian Darcel de Vulgt who suffers from Vitiligo, thus bringing awareness to the skin condition. The retelling of ‘Snow White’ also features the story of Gene Miles, a Trinidadian socialite whose fall from grace was the consequence of being vocal against an injustice. ‘The Wizard of Oz’ features heroes of the Haitian revolution like Toussaint Louverture and elements of the Orisha religion. Dorothy is re-imagined through the Haitian voodoo priestess ‘Cécile Fatiman’. The collective will soon feature the retelling of ‘Rapunzel’ and will merge Caribbean folklore into the classic story.

The importance of retelling Caribbean history from a Caribbean perspective is steeped in giving an accurate representation of ourselves. By the use of traditional children’s tales that have been ingrained in us since our formative years – as Compton puts it – and injecting the vibrancy and triumph of Caribbean history, our stories are retold in a way that sparks interest.

As Robert Young admits in an excerpt of the film, he was not aware of many of these historical recollections for much of his life. In reality, this is the case for many West Indians of all ages, but the whimsy of ‘The Revolution of the Fairytale’ is enough to capture the attention of both children and adults alike while keeping them informed.

Indeed, Lou Lyons was right in asking, “What better way to manifest your will to define yourself other than revolution?”

Fiona Compton has embarked on this project with the mission of educating the Caribbean on their history through the arts. ‘The Revolution of the Fairytale’ successfully takes classic fairytales, unravels them, and retells them in a way befitting of celebrating our West Indian heroes.