A report by Caitlin Dickerson for the New York Times.

After a day spent working in an office in the dark, without air-conditioning, Iris Díaz arrived at her neighborhood CVS drugstore desperate for what has quickly become one of the most sought-after items in Puerto Rico: bottled water.

A sales clerk standing behind the checkout counter explained that the store had been out of stock for three days.

The employee shook her head and apologized.

Three weeks after Hurricane Maria tore through Puerto Rico, the challenge of finding enough water to drink and cook with remains enormous across the island, even in its largest city. People here engage in a perpetual game of cat and mouse, scouring the city for any hints of places with water to sell.

People are so desperate that on Wednesday the Environmental Protection Agency cited reports of residents trying to obtain drinking water from wells at hazardous Superfund sites. “E.P.A. advises against tampering with sealed and locked wells or drinking from these wells, as it may be dangerous to people’s health,’’ the agency said.

The demand has skyrocketed, according to grocery store managers, distributors and supply companies, because safe, drinkable tap water is still largely unavailable, and deliveries of water from the outside have not kept up with demand. Even Puerto Ricans who have been told that their local water is safe to drink are avoiding it because of reports that infectious diseases are spreading on the island.

The sight of water delivery trucks outside stores is prompting long lines to form. Crushes of customers snatch up new shipments even before store employees can restock empty shelves. Of 10 stores in San Juan that were visited on Tuesday and Wednesday, only one had bottled water: a Walmart store where two brawny men were loading cases of water directly off a shipping pallet into the shopping carts of people who had lined up in the back of the store. Signs posted on the walls declared a limit of one case per group.

Phillip Keene, director of corporate communications for Walmart, said that during the storm, the company had safeguarded pallets of water on cargo ships that were sent out to sea and away from Maria’s path. Since then, the company has been delivering about six million bottles of water a week to Puerto Rico from the continental United States, and it is making plans to double the supply as soon as possible. Mr. Keene added that before the storm, Walmart stores in Puerto Rico generally sold about 300,000 cases of water a week, almost all of it bottled from sources on the island.

Some Puerto Ricans, particularly those in rural areas, are relying entirely on water provided as emergency aid by the Federal Emergency Management Agency. The water is sent to local distribution centers, and then delivered door to door by local governments.

Federal officials said that as of Wednesday, more than six million liters of water had arrived on the island, but that damaged ports, roads and bridges had slowed the deliveries, especially to the interior of the commonwealth. Officials say 75 percent of the island’s ports are open, and they are receiving about 1,100 containers of supplies a day, close to the 1,400 that came in daily before the storm.

The lack of water is far worse than anything experienced in Florida and Texas after Hurricanes Irma and Harvey. Relief experts say that because of the extent of damage to Puerto Rico’s water systems, the scale of the overall destruction and the difficulty of delivering aid to an island rather than on the mainland, it did not make sense to compare the response in Puerto Rico with Florida or Texas in terms of efficiency or focus.

Before Maria hit, most of the bottled water consumed in Puerto Rico was produced in factories on the island, according to Manuel Reyes Alfonso, executive vice president of the Puerto Rico Chamber for the Marketing and Distribution of the Food Industry, a trade association of grocery manufacturers, distributors and store owners. Most of those facilities lost power during the storm and are now operating on generators, which allow them to produce only a small fraction of their normal output.

The island was already running low on bottled water before the storm, because it was exporting a lot to places that had been damaged by Hurricanes Harvey and Irma, Mr. Reyes Alfonso said. 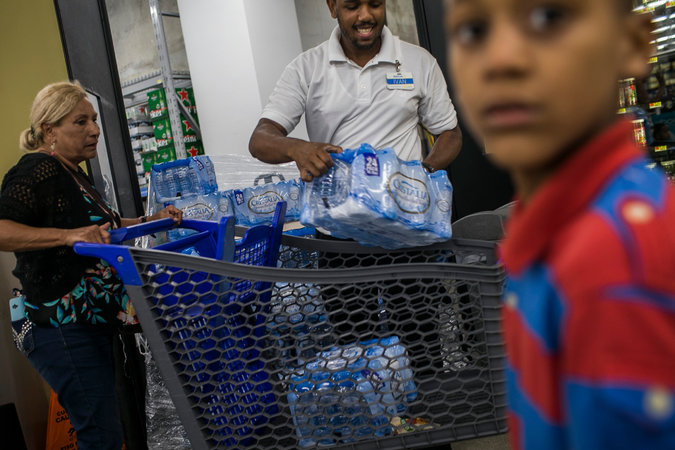 In the CVS where Ms. Diaz was shopping, Carmen Santiago, a 74-year-old retired English professor wearing a plaid shirt and cargo pants, said she had given up on finding water in stores. She said she was surviving on a single bottle a day, which was all the hospital in her neighborhood would sell to each person who came to buy water — for $1.25 each.

She was at CVS in search of boxes of orange juice, an alternative to water that would be light enough for her to carry back to her apartment on foot. She found none on the shelves, but a store employee who saw her searching disappeared into a stock room and returned with news that a shipment had just arrived. Ms. Santiago jumped up and down, and her eyes became teary.

In a store in the Hato Rey neighborhood called Plaza Louiza, which was open despite having no electricity, shoppers caromed around in the dark on Tuesday, looking for essentials and seeming to ignore the smell of rotting food.

Down an aisle of dry goods, Maritza Pérez used the light from her cellphone to illuminate the prices of ramen noodles and rice. She had come looking for water, but the store had none available. It was her fifth unsuccessful try of the day.

Her home was still without electricity or water. She, her husband and their 12-year-old son were growing impatient with having to drink a kind of storm tea — boiled tap water, which she said had turned a yellowish hue after the storm.

“Water is the most important thing — more important than light,” she huffed, sounding exhausted.

At the front of the store, two deliverymen from grocery-supply companies were sitting on the floor, scanning their lists of orders. They were trying to call the clients they planned to visit next, but were mostly unsuccessful, because cellphone service in the area is still very limited.

Elvin Cortes, one of the deliverymen, said that he had been perpetually out of water since the storm hit. His deliveries took longer than normal because many roads were still impassable. On top of that, he said, much of the island is suffering from crippling traffic jams because most traffic lights are still out, turning major intersections into chaotic and dangerous four-way stops.

“It’s impossible for us to do our jobs,” he said. “And it’s not getting any better.”

One thought on “Finding Water in Puerto Rico: An Endless Game of Cat and Mouse”