A report by Kayra Williams for the St Lucia Star.

First registered in 2014, the first product from Algas Organics, Algas Total Plant Tonic – a Sargassum seaweed-based plant tonic, hit the market in August 2015. Two years later, Johanan Dujon, the company’s Managing Director and Founder walked away with the Young Entrepreneur of the Year title at the Chamber of Commerce-hosted Saint Lucia Business Awards, an accolade that was tied to Algas’ innovation and environmental consciousness. Since then, Algas’ team of six, who are “mostly family”, according to Dujon, have focused on keeping the wheels in motion and finding ways to tap into larger markets. This week, the company’s MD shared the secrets to Algas’ success.

What do you think contributed to you winning the Young Entrepreneur of the Year award this year?

Johanan: A very good team and support from a number of organisations such as the Saint Lucia Fisher Folk Co-operative Society, the Global Environment Facility’s (GEF) Small Grants Programme, United Nations Development Project (UNDP) and our partnership with the Inter-American Institute for Cooperation on Agriculture (IICA).

What inspired you to start this business?

Johanan: I strongly believe that every challenge or problem which confronts us is merely an opportunity,

if we take action. This is what inspired me to take the step to start the business. I had no idea how far it would go.

What makes your company different?

Johanan: Our story. We are the Caribbean’s first biotechnology company so when you think of Monsanto and Syngenta and these big agricultural brands, we are right up there, and that’s what makes us different.

When I say our story, it extends even beyond that. We partnered with the Saint Lucia Fisher Folk Co-operative Society to remove Sargassum seaweed which plagues the beaches of Saint Lucia and the wider Caribbean, and convert it to fertilizer. We were able to create a bio-fertilizer, which is internationally tested and even better than some of the imported chemicals. We’re not just a seaweed company, or a company that makes fertilizer; we work with fishermen in the community who are affected. Farmers get employment, and get to resume some form of normalcy in their livelihood. 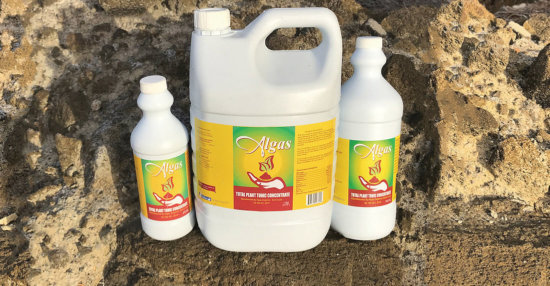 Where is this seaweed coming from?

Johanan: Sargassum seaweed normally originates from the Sargasso Sea in the North Atlantic Ocean. Due to increasing ocean acidity and temperatures, this seaweed breaks up into rafts and is carried by currents through the Caribbean and Mexico. However, more recently, the Sargassum which we are experiencing has been coming from the North Equatorial Recirculation Region (NERR) North of Brazil and not directly from the Sargasso sea.

What capital investment or Funding enabled you to start your company?

Johanan: Thanks to funding from the Global Environment Facility’s (GEF) Small Grants Programme, United Nations Development Project (UNDP) and our partnership with the Saint Lucia Fisher Folk Co-operative Society, our product is made from the world’s first Sargassum seaweed processing facility, located at La Caye, Dennery.

Where are you exporting to now?

Which markets will you target next?

Johanan: Our goal is to penetrate the North American and African Markets within the next three years.

Are you currently looking for investors?

Johanan: To be frank, yes. The right investors. As we scale and we start to export and penetrate larger markets, that would be important.

How did the hurricanes impact your business?

Johanan: Thankfully we were not affected by the hurricanes. My heart goes out to Dominica and the other affected territories. We are working on forwarding aid to Dominica through our Caribbean Entrepreneur Group as early as next week.

What lessons can Caribbean start-ups and aspiring business people learn from your experience?

Johanan: Pull up your bootstraps as much as you can. If you can avoid taking on loads of high up-front expenses, then avoid that. Make prototypes of small batches of whatever you’re doing or, if you’re offering a service option to a small quarter of persons, do so at a discounted price, or for free. You really want to get yourself out there without costs being sky-high. Banks are not necessarily going to come to your rescue either.

Your recipe for success?

Johanan: Planning, teamwork, and hard work. My team is amazing. I am just the face of a very, very good team.

Your plans for the immediate future?

Johanan: We do continuous research and development so you can look out for a bio-pesticide, all natural pesticide, coming out soon.

Our plans are for export; the Saint Lucia market is small, and this is our goal, exporting within the next few months or so.

Where can we purchase your products and how do we make contact?

One thought on “Algas Organics: The Winning Formula”