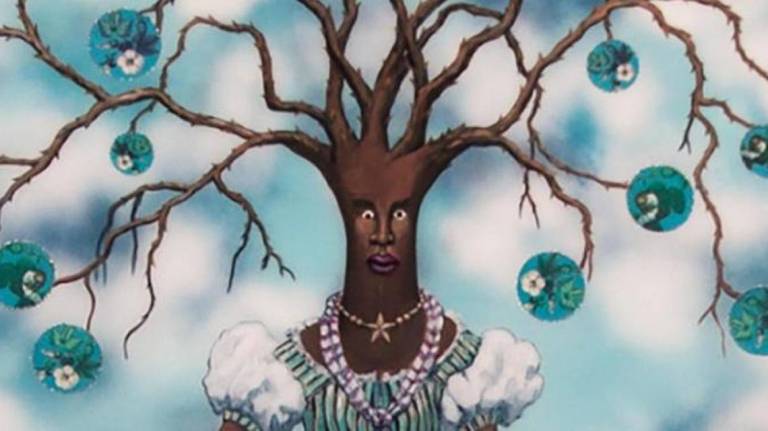 A report by SIOBHAN MORRISSEY for the Miami Herald.

Without taking a knee or raising a fist, Miami-based artist Edouard Duval-Carrié highlights unsettled issues that arise from slavery in his native Haiti as well as his adopted United States. The message unfolds at the entrance to his latest show at the Museum of Contemporary Art – North Miami. An attractive painting of a woman who seemingly transforms into a tree is set against a backdrop of cottonball clouds and pastel blue skies. But upon closer inspection, all is not sweetness and light.

“The problems stemming from slavery never have been fully addressed in this country,” Duval-Carrié says, pointing out the shackles attached to the woman’s right ankle. It is staked to a map of the United States, which in its founding days benefitted from an economy based on slave labor. The painting, titled “Of Cotton, Gunboats and Petticoats,” sets the tone for his “Metamorphosis” exhibition that runs through November 5.

Not only does the woman in the turquoise dress and crinoline petticoat morph into a cotton tree, but also the artist morphs Haiti’s slave history on the sugar plantations with the role cotton played in the United States. That layering of meaning, a duality between apparent dreaminess and stark reality, permeates the exhibition as Duval-Carrié expertly uses color and light to retell a dark tale. The image looks sweet, he says – “Until you decode it.”

“I’m always trying to place Haiti in the larger scheme of things,” he says, both in terms of how Haiti is influenced by historical and current events and how the tiny nation influences the world around it. Central to that discussion is the abject fear that gripped the United States after Haitian slaves revolted against the French in 1791. “I’m morbidly aware of the failings and at the same time of the daring that it took to fight the rest of the world…in staging the first successful slave rebellion in the history of humanity. Haitians will tell you the whole world has punished them for being so bold.” 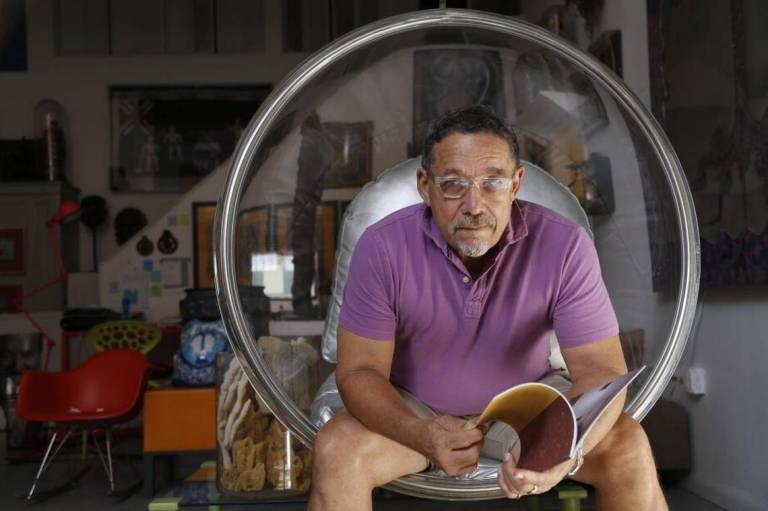 This is a seminal exhibition for Duval-Carrié, whose solo show deftly transforms the museum with a display of sight and sound into 10 distinct segments. Equally important, the show serves to further solidify MOCA’s role in the community, both as a museum showcasing Miami artists and attracting other contemporary artists of international repute. (Those include Swedish photographer Jacob Felländer, whose virtual world will be featured at the museum during Art Basel in December.) Perhaps most amazing is the museum’s ability to stage world-class shows with fewer than a dozen staffers — and that includes the receptionist and chief of security.

The show was a loving endeavor for Duval-Carrié, who in 2014 had a much more compact exhibit at the Pérez Art Museum Miami. Confined to one gallery with a dozen or so large-scale works, that show felt almost sanctified, as if one were in a chapel. By contrast, the MOCA show incorporates video and an operatic soundtrack that encourage visitors to more fully engage with the art and discuss it with others in the room.

The show is broken into several distinct segments. A side room is filled with books, maps, stuffed animals, statuettes, amulets and a variety of eclectic objects the artist has collected over the years, that often reappear as images in his work. The centerpiece of the cabinet of curiosities is a stuffed snowy owl, similar to Harry Potter’s beloved Hegwig. Other highlights include two large shields from the Asmat tribe of New Guinea, a bronze Jain altar, and what is considered to be the oldest existing map of Haiti’s capital city, Port-au-Prince.

The exhibit’s main entrance is guarded by two massive Sphynx-like creatures. But unlike the temple guardians of ancient Egypt they reference, these Styrofoam sculptures convey a sense of comical majesty. Aside from revealing the artist’s renowned sense of humor, the gates also serve to further emphasize the sense of awe and discovery that awaits.

On one side, a series of four circular paintings, each nearly 8 feet in diameter, depict images of a shapeshifting witch known as a soucouyant. According to Caribbean folklore, the soucouyant streaks across the sky like a fireball and enters the home of the unsuspecting to suck their blood while they sleep. Duval-Carrié uses bright colors to make the images seem a little less frightening. He builds the face and bodies of the figures with shells, sand dollars and other objects that look as though they emerged from the sea, much the way the 16thcentury Italian artist Giuseppe Arcimboldo famously used fruit and vegetables, fish and frogs to create human portraits.

Eight “Memory Windows” fill the opposite wall. Each features a central octagonal image surrounded by eight other images. Historically, the number eight and the octagon symbolize resurrection and rebirth. Leonardo da Vinci repeated the shape in numerous works, while the Chinese use the octagon to ward off evil and to attract good health and good fortune. Duval-Carrié’s windows are delightful resin displays, each backlit to illuminate the various toy insects, tiny dolls, hearts, jellyfish, snakes, turtles, airplanes, stars, roses and other objects imbedded in the artwork.

Many of the eight windows depict images of Haitians of historical significance, memorialized in sepia-tone photographs. One features mermaids, mythical creatures of particular significance to Haiti.

“Mermaids are considered the savior of the slaves,” Duval-Carrié says. “[The mermaid] guides the boats to make sure the slaves and crew survive. She is the spirit behind it all. You can ask yourself, ‘What is that? Did she permit it? Did she allow it?’ But she is an essential figure in this transatlantic, middle passage.”

From the ceiling hang two sparkling white ships, looking like some magical sugar sculptures with spurred outriggers that can both sail through the sky and under the sea. Their sweet names — “Sugar Puff” and “Sugar Bun” — belie the dark nature of their cargo: the stolen lives destined for unpaid labor and untold horrors.

In a video nook, two wide screens show a constant loop of “The Deconstruction of the Goddess Erzulie.” The love goddess of voodoo appears in kaleidoscopic images while an opera blares in the background. “I was hired to be an artistic director of an opera that never happened,” Duval-Carrié explains. He repurposed the soundtrack and paired it with the video to complement his “Memory” windows, whose multiple divisions also present the fractured frames of a kaleidoscope.

On another wall, the artist has displayed 14 etchings he created to illustrate Alejo Carpentier’s 1949 novel about Haiti titled “The Kingdom of This World.” The Cuban author used magical realism to tell the history of Haiti before, during and after the slave rebellion against France.

Florida State University in Tallahassee helped Duval-Carrié create his etchings using a 3D printer. “It is a story, an engraving,” he says. “It took me a year and a half to arrive at that product. It was a lot of trials and failures.” The resulting works are beautiful renderings that could pass for etched plates in an old book. Here, they are white images on blue, mounted in shadowbox frames. The light is aimed just so to allow the image to be seen not only from the front, but also in shadows at the back of the boxes. An unexpected trick of light also casts the images on the floor in front of the first four etchings.

Regardless of presentation or medium, the works throughout the show resonate with present-day reminders of slavery past.

“This is the quest of my life — to try to figure out what happened and how it happened, and what were the consequences of these actions centuries ago,” Duval-Carrié says. Though the American Civil War occurred more than a half-century after the slaves of Haiti gained their independence, in the U.S. “the debate was always there about what to do about slavery. Now a century later, you have discussions about it again. The discussions were not solved by that war. By talking about it, I’m realizing that my discourse is much larger than Haiti’s.”

The beauty of his art makes it easy to listen to his message and the questions he raises.

Extra: Stay tuned for “How to Unlock a Portal” by Jacob Felländer, where the viewer takes a virtual reality tour of the artist’s creations. Slated to open on Dec. 7, during Art Basel Miami Beach.