A report by Richard Fausset for the New York Times.

Dr. Lissette Gutierrez is normally not one to curse. But when the S.U.V. she was traveling in hit a rut and bounced wildly on a mud road carved into a mountainside — a steep decline inches to her right, the pounding rain all around — an expletive escaped her lips like some rare ugly moth.

It was Saturday afternoon, and Dr. Gutierrez was part of a small medical convoy trying to get to an isolated community called Don Alonso, in the mountainous center of Puerto Rico. There was word that no doctor had been to the place since Hurricane Maria had roared over the island Sept. 20, triggering mudslides throughout the largely rural municipality of Utuado, at least one of them deadly.

Dr. Gutierrez, 45, a gynecologist, is a Puerto Rican living on Long Island, and her decision to come here on her own is part of the narrative of resilience and selflessness defining life on Puerto Rico as the island struggles to navigate the devastation that Maria left. But on this day — through no fault of her own — Dr. Gutierrez would become part of a parallel narrative of failure that also defines Puerto Rico.

Failure here is not a possibility, but a fact. Failed roofs, failed water systems, a failed electrical grid. Failed hillsides, running chocolate brown with mud in the rain.

The caravan had begun without Dr. Gutierrez just after sunrise, in the graceful southern city of Ponce. It was led by a small group from AmeriCares, a nongovernmental organization that specializes in emergency medical response work.

Dr. E. Anne Peterson, the group’s senior vice president of global programs, was in a nearby hotel courtyard, bees buzzing over her breakfast, laying out the day’s planned itinerary: first, a clinic, to pick up $2.8 million in donated medicine that had been flown in Friday night. Then, a delivery to a hospital in the city of Utuado to the north. Then to the mountains, to look for patients in need of care. Then another delivery of medicine in the city of Castañer to the southwest.

Dr. Peterson, 61, a global health expert with experience in both Puerto Rico and sub-Saharan Africa, said that Puerto Ricans living through the rebuilding period could expect outbreaks of diarrheal diseases from compromised drinking water, as well as potential outbreaks of mosquito-borne illnesses like chikungunya, Zika and dengue fever.

Her most pressing concern was the mental health of people who would have to wait months before their electricity was restored, who had seen their green forests stripped bare, and who would struggle, in many cases, to find work and feed their families.

“In the initial days, people are really happy to be alive,” she said. “Then, in the next few days, it’s ‘I lost everything, it’s hot, I need food.’ They start getting very weary.”

The caravan stopped at the clinic and loaded up a Jeep with boxes of the newly arrived medicine. They also picked up Dr. Eric T. Mizuno, an internist from Chicago, and Dr. Gutierrez. The doctors were wearing scrubs and were anxious to see patients. Dr. Gutierrez knew there were elderly people in need, tucked away in the mountains.

“We have friends who’ve said, ‘I’m going to go and get my parents and take them to the mainland,’ but they’d say: ‘No. I want to stay here.’ ”

The caravan headed north, with Dr. Peterson confidently steering a big S.U.V. The island’s health system, she said, “is like the electrical system — it’s trying to cover everyone, but it’s impoverished and fragile, and it can’t cover everyone’s needs.”

They arrived in Utuado, a modest-size city in a small valley. Three people died here when Maria loosened a steep hill of mud that went rushing into the back of their house. Mudslides continue to be a problem with each new rain.

The sun was shining on Saturday as the visitors made their way to the city’s National Guard base. Two soldiers agreed to lead the caravan up to Don Alonso.

Yelitza Sanchez, the executive director of the small, tidy hospital, said that for days it had relied on tiny generators that could not power the air-conditioning. But the military had come on Friday and set up a bigger generator. Now the air was blowing cold, but other challenges remained unmet.

“We don’t have any communications here,” Ms. Sanchez said. “No internet. The satellite phone is not working.”

Dr. Gutierrez had broken off from the group to speak with a hospital patient, a father of two young children who had recently checked in. His house had been ruined, the doctor said, and he had tried to kill himself with alcohol and pills.

The caravan returned to the National Guard base and prepared for the trek up the mountain. Dr. Gutierrez waited in the shotgun seat of an S.U.V. Dr. Mizuno walked over and pointed up to the ridge line, where the sky was darkening. “We’re going to lose the day,” he said. “Look at the rain up there.”

The small convoy of trucks and S.U.V.s headed up into the hills anyway. Dr. Gutierrez spoke about how she had gone to treat patients in Haiti after the 2010 earthquake. Later, she took teams of medical interns there, she said, to learn lessons in empathy.

The mud road went up and up. Soon it was just a little wider than one lane. Just after 1 p.m., the caravan stopped. A 56-year-old man named José Cruz, a state police sergeant, had been coming down the mountain when his cherry-red pickup got stuck in the mud. 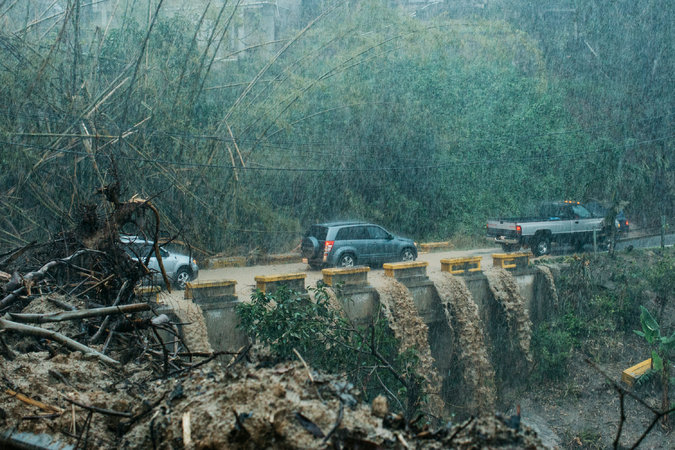 Mr. Cruz shouted that two bridges near his house had collapsed in a rainstorm the day before. The day before that, he said, a helicopter had dropped some food and supplies.

The clouds seemed pregnant and ready to burst. “You can get through,” he said. “But there are a lot of mudslides.”

Dr. Pierre E. Altieri, a clinical psychologist from Ponce, and one of the soldiers hooked Mr. Cruz’s truck to theirs with a cable and pulled him to safety.

The convoy moved on, the rain pelting down now and the little road a river of fast-moving water and mud. Throughout the journey, the caravan had passed little one-story concrete homes; some seemed to have been damaged by Maria, while others appeared to have been abandoned or neglected long before the storm.

“This is where Trump should have come, instead of throwing paper towels,” Dr. Gutierrez said.

She held her breath as the S.U.V. bounced over one rut and then another. They encountered another stuck vehicle. The rain enveloped everything, pouring down as if it would never end. Fearing for their safety, the people in the convoy decided to turn back.

By 2:30 p.m., they were back in the city of Utuado, where the streets ran red-brown with still more mud. Dr. Gutierrez and a few of the others huddled under the awning of a supermarket.

“Disappointed,” Dr. Gutierrez said. Dr. Peterson said the group would try again some other day, and eventually make it through.

The skies were not ready to let up yet. The convoy moved through the rain, headed toward the safer roads to Castañer and the next medicine drop.

The chance of thunderstorms in Utuado is 50 percent or greater through Saturday. For the time being, it seemed, there would be no easy road to Don Alonso.