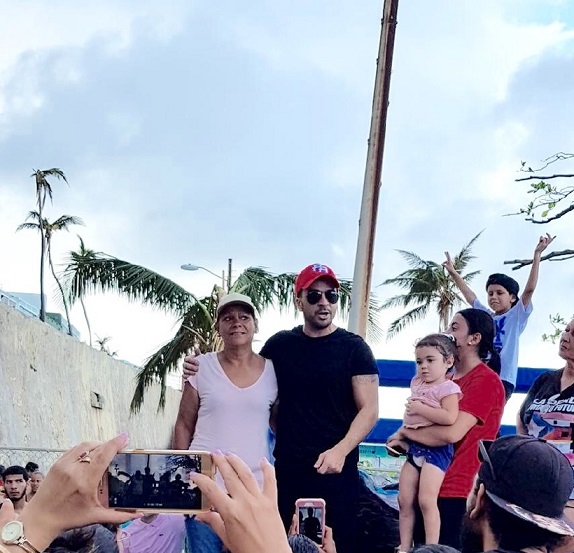 The anxiety was palpable at Luis Muñoz Marín International Airport for residents of Puerto Rico who managed to leave recently, many with pets in tow. Yet despite sweltering heat in terminals without air-conditioning, cheers when disaster volunteers disembarked from arriving flights. Some Puerto Ricans living stateside also flew in; what would make them return now? Sheer anguish of not being able to contact loved ones left incommunicado by a telecommunications collapse caused by the Category 4 –bordering on 5– hurricane that struck a devastating blow two weeks ago.

Then flies in “45,” as President Trump is often called, the 6th U.S. president to make an official visit to Puerto Rico. All the presidents that have visited Puerto Rico are immortalized with statues at the state capitol. Trump’s might well be depicted with arm raised, lobbing a roll of Bounty.

Increased military presence leading up to his visit aimed to rewrite the script of widely reported failures in distributing aid, just in time for a choreographed media-op by the Kim Kardashian of politicians. Some local analysts had worried it would be more branding than substance, more TV than reality. It turned out to be worse–downright insulting.

For Saturday Night Live it might be difficult to top, as Trump has become a parody of himself, recently dedicating a golf tournament trophy to victims of hurricanes Harvey, Irma and María.

With amnesia of “you’re doing a heck of a job, Brownie,” Trump tweeted that all buildings in Puerto Rico have been inspected. Pro-statehood governor Ricky Rosselló, alternating calls for aid with praise of federal efforts, didn’t quite know what to make of the claim.

The indelible image from his visit to the island: Trump lobbing rolls of paper towels into a crowd as if at seals. He also told officials that the worst catastrophe to beset the island in a century had strained the federal budget. Moody’s has set Puerto Rico’s losses at $45 to $95 billion.

Fewer than 20 of 69 hospitals have regular electricity, about half of dialysis centers were closed midweek, and for the many diabetics, insulin requires refrigeration or ice. Indeed some of the 5 million Puerto Ricans living stateside now struggle to get relatives with medical needs out.

There is something abhorrent in the spinning of news when so many lives are at stake. Trump touted that only 16 had died, then after he left the official count rose to 34. But news estimates are much higher and the current death toll is impossible to determine. Some rural areas still remain completely isolated. Local food sovereignty activists on the ground see risk of starvation. There have been calls for a massive airlift.

“San Juan looks to me like Basra in 1991,” said veteran Reinaldo Piñero Medina, who was an air defense platoon sergeant in Desert Storm. Recently working security at a Banco Popular, he had not yet heard from his daughter on the north coast of Manatí.

President Trump’s colonial insinuation that Puerto Ricans were not working hard enough to overcome the calamity added insult to injury before his visit, when so much endless toil is evident on mass media.

Now the mood of uncertainty preceding the storm is compounded. The economy was already crippled by a $72 billion debt and $46 billion in pension obligations, with bankruptcy declared in May. The debt had reached explosive proportions in part because of Puerto Rico’s territorial status, which allowed triple tax-free municipal bonds that were especially popular. Making it worse, vulture hedge funds preyed on bonds once risky with sky-high interest.

San Juan Mayor Carmen Yulín Cruz now calls for a 10-year moratorium, while others pitch debt forgiveness. Even Trump called for canceling the debt, though presidents don’t have the constitutional power to do so–likely just more spin. The National Hispanic Leadership Agenda is promoting a Marshall Plan that requires $70 billion.

Requests multiply to exempt Puerto Rico from the 100-year-old Jones Act, seen across political sectors as an antiquated maritime monopoly that has long hindered Puerto Rico’s economy. Trump’s temporary suspension ends Sunday, with much of the country still in emergency mode.

The collapse of a neglected, petroleum-based electric utility and reliance on diesel for back-up generators both testify to the incalculable cost of fossil fuel dependency (especially considering the effect on climate change super storms). What better time to switch to renewable energy, and cut ties with the toxic-ash-producing corporation AES and the Aguirre Offshore GasPort project, both opposed by the Peñuelas and Salinas communities of the south.

The winds of change post-hurricane María should sweep away Puerto Rico’s Jones Act and fiscal control board altogether.

Even outside investor Nicholas Prouty declared Promesa obsolete. He and hundreds of multi-millionaires have been attracted to Puerto Rico by laws 20 and 22, controversial measures that guarantee zero percent income and capital gains tax rates for 20 years as long as they reside on the island for six months of the year.

These laws, along with recent off-shore banking, and Sotheby’s luxury real estate sales, envisioned Puerto Rico as a tax haven (though more apt is the literal translation from Spanish: fiscal paradise). Tax these dodgers for the recovery, at the very least.

The disaster has also stoked fears of accelerated public sector privatization and neighborhood gentrification. In San Juan’s iconic barrio La Perla–setting of the blockbuster video for Despacito–the storm destroyed wooden homes but colorful cement dwellings still stand. In the early morning hours the day after María hit, as folks cleaned up debris, a community leader stood her ground, saying in Spanish, “they’d have to kill us to get us out of here.”

What Puerto Rico needs is a Marshall plan and debt forgiveness–not loans. If post-hurricane policies do not veer radically, expect more Exodus. The destination of displaced Puerto Rican U.S. citizens will be the soon-to-be Blue State of Florida. And then María will most definitely be Trump’s Katrina.

[Photo above by FRANK SUSTACHE: Famed Despacito singer Luis Fonsi made an impromptu visit to the barrio La Perla Monday, promising to lend a hand in rebuilding.]