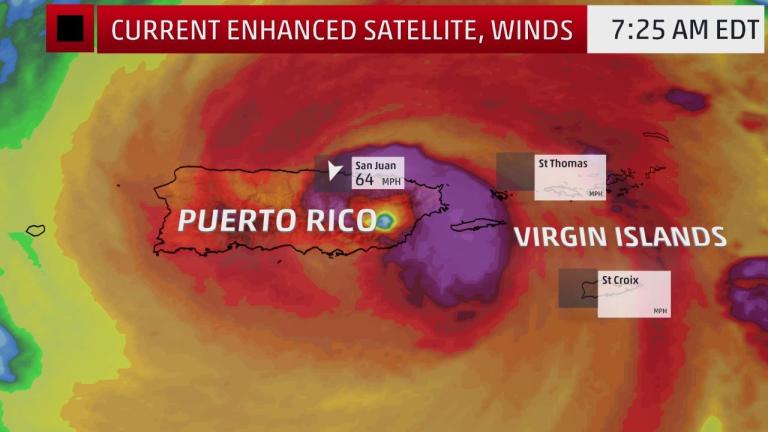 The full title is “Hurricane Maria Has Begun Its Potentially Catastrophic Siege on Puerto Rico after Hammering the Virgin Islands” and the word used to describe Hurricane Maria’s action on the islands is “pummeling.” Friends on Facebook have been sending quite frightening images, videos, and stories about this initial landfall, and this is only the beginning. The reports says that Maria will be the hurricane with the strongest Puerto Rico landfall since September 1932. In the meantime, we still haven’t heard from friends on other islands like Dominica, the Virgin Islands (and St. Martin, since Hurricane Irma!) Here are the latest conditions.

Here are a sampling of peak wind gusts seen so far in Puerto Rico and the Virgin Islands as of early Wednesday morning:

Flash flood warnings have also been issued in much of eastern Puerto Rico. At least a half dozen river gauges reported levels above flood stage already, with more heavy rain moving in.

Maria will be the strongest Puerto Rico landfall since a Category 4 September 1932 hurricane.

Prior to both Irma and Maria, only four other Category 4 hurricanes had tracked within 75 miles of central Puerto Rico in historical records dating to the late 19th century. Hurricane Hugo in 1989 was the last to do so prior to 2017, though it had weakened to a Category 3 hurricane as it clipped the northeast tip of Puerto Rico, according to the NOAA best tracks database. [. . .]