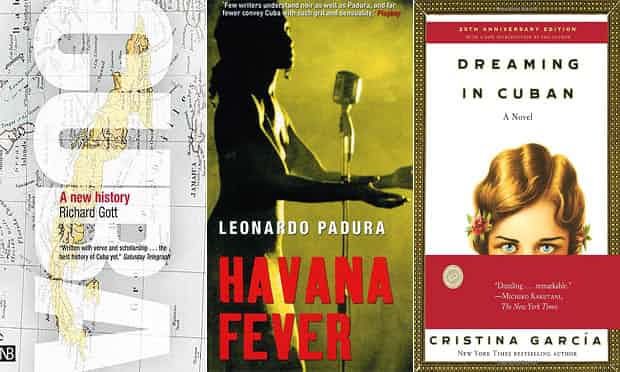 Pushpinder Khaneka (The Guardian) suggests three “best books” on Cuba, offering “a literary tour of Cuba [that] takes in crime noir, a tale of love and loss set against the Cuban revolution, and a rich chronicle of the Caribbean island’s history” with Cuba: A New History by Richard Gott, Havana Fever by Leonardo Padura, and Dreaming in Cuban by Cristina García.]

It’s 2003, and ex-cop Mario Conde – the hard-drinking, heretical anti-hero of Padura’s Havana Quartet of crime novels – is now a second-hand book dealer. In his constant search for literary gems, he stumbles across the decaying mansion of a wealthy Cuban who fled the country after the revolution. Inside, Conde discovers a library containing a treasure trove of antique books – watched over by a half-starved brother and sister. One of the dusty volumes yields up a newspaper cutting about a beautiful bolero singer who disappeared 50 years ago. Conde becomes obsessed with finding out what happened to her.

Then one of the library’s custodians is murdered. Are the two events linked across the decades? With sleuthing still in the former detective’s blood, Conde sets out to crack both cases.

Padura vividly evokes the glamour and sleaze of the 50s under Batista – when Havana was a mafia-run playground for rich Americans – and the hardships of daily life in post-Soviet Cuba. The Cuban capital is central to the story as Conde’s inquiries lead him from the heart of his beloved Havana to its dark and dangerous underbelly.

This is crime noir delivered with all the verve and verse of a memorable bolero. Padura, an investigative journalist-turned-novelist, still lives in the Havana neighbourhood where he grew up.

Dreaming in Cuban by Cristina García

García’s bittersweet novel of love, loss and longing, set against the backdrop of the Cuban revolution, tells the story of three generations of women in the Del Pino family who are divided by loyalties and location.

Celia, the matriarch, loves the island and El Líder (Fidel Castro). Her elder daughter, Lourdes, has fled to the US with her family, embraced the American dream and despises Castro. Meanwhile, Celia’s troubled younger daughter, Felicia, seeks solace in the Afro-Cuban religion of santeria.

Most of the “dreaming in Cuban” is done by Celia’s New York-based granddaughter, Pilar, who struggles to bring together the fragmented pieces of her Cuban-American identity. The rebellious punk-artist mocks her mother Lourdes’s rightwing views and yearns to be with her grandmother, to replenish the idealised memories she has of the island she left as a child.

Pilar ultimately engineers a visit to Cuba with her mother for a brief, emotionally charged family reunion, which culminates with the 1980 Mariel exodus of Cubans to the US.

García’s lyrical storytelling moves from first to third person, past to present, and Havana to New York. And although the protagonists carry unrealised dreams and frustrated hopes, infusions of humour and magic realism lend the novel an alluring lightness of touch. Havana-born, New York City-raised García worked as a journalist before writing this, her first novel.

This rich, comprehensive chronicle of Cuban history sweeps across 500 years, from Spanish colonisation to the present day, with an emphasis on the 20th century. The arrival of the Spaniards led to the indigenous population being decimated, through slaughter and disease. Black slaves were imported to work the sugarcane and tobacco fields, and racism became a constant on the Caribbean island. A long war of independence brought US intervention and a brief occupation, in 1898. The nascent Cuban republic was plagued by violence, corruption and persistent US meddling – military and political. The resentment created, Gott says, “was eventually swept away by Fidel Castro’s revolution in 1959”.

The revolution put Cuba on the world stage, but its radical nature meant that within months the US had settled on its overthrow. Washington’s trade embargo and backing for the Bay of Pigs invasion in 1961 resulted in Castro embracing the Soviets. Gott offers sharp, balanced analysis of Havana’s domestic and foreign policies, including its attempts to export the revolution – led by Che Guevara – and military expeditions to Africa.

In the 1990s, the regime overcame an existential crisis, weathering a harsh economic storm after the USSR’s collapse. In summing up, Gott writes: “Cuba [has] seen off three colonial powers: Spain, the US and the Soviet Union.” The author, a former Guardian journalist, was present in Bolivia to identify Guevara’s body when he was killed there in 1967.

[Image above: Book covers of Cuba: A New History by Richard Gott, Havana Fever by Leonardo Padura, translated by Peter Bush, and Dreaming in Cuban by Cristina García.]

One thought on “The best books on Cuba”