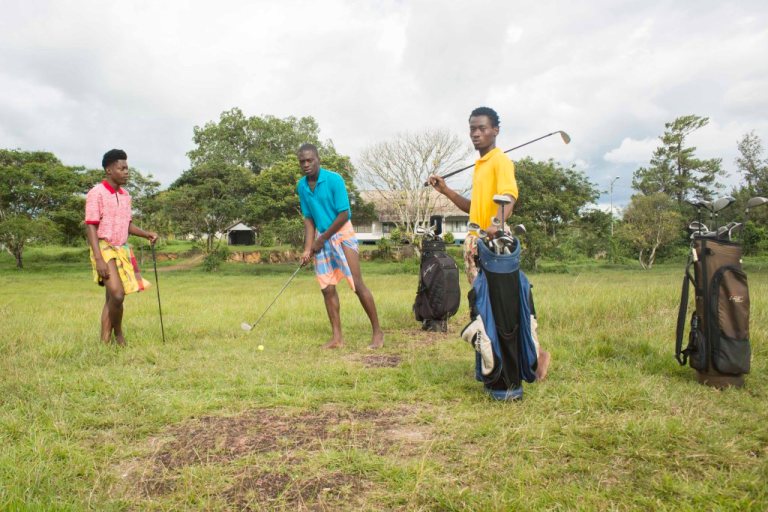 Dutch artist Roosje Verschoor spent a month in Moengo, Marowijne, Suriname, as an artist in residence at the Tembe Art Studio (Kibii Foundation). Sranan Art’s Blog posted her account on her experiences producing this series. Here are excerpts from her observations:

‘Casa Blanca’ is the photographic installation that I made for the Contemporary Art Museum Moengo, during my stay in Moengo. The work consists of four photos, showing a scene with three ‘Aukaner’ boys who are golfing. They wear colorful polo shirts, as is to be expected from golfers, but they also wear kamisa’s, the traditional clothing of a Maroon man. They lean comfortably on their golf club or practice their swing, as if it is something they do daily. But the situation has been staged for the photo. I choose the Golf course as the point of departure for the story I want to tell, as it was once, along with the swimming pools and tennis course, one of the luxurious attractions of the old Moengo.

This project was a way for me to find out more about the community of Moengo during the time of Suralco. [. . .] I was intrigued by the story of the golf course: such an imported golf club is a symbol of social inequality, of exclusivity. Yet at the same time it was just a way to pass the time for a man who did not feel at home in Moengo.

The golf club of Moengo no longer exists. The course is completely overgrown by scrub. The mining town of Moengo was built with a characteristic segregation in living function: staff members of Suralco lived in Stafdorp [staff village] with their families. The rest of the workers lived in labor homes in Moengodorp, Julianadorp and Bernharddorp, depending on the labor agreement they had. The social position of a resident of Moengo was directly related to his position within Suralco, by the architecture and the variation in payout (month and week earners, educated and non-educated). At that time, Suralco employed hardly any Maroons at all, and they were thus not allowed to live in Moengo either. Nowadays the residents of Moengo consist primarily of Maroons. [. . .]

One thought on ““Casa Blanca”—A Photographic Installation by Roosje Verschoor”