A report by Sandra Cuffe for the Earth Island Journal.

In Honduras, coastal communities are embracing native plants as a means to mitigate climate impacts

Aurelia Arzú inspects the cocoplum patch and reaches in to pluck the ripest fruits. It’s early in the year, and the season is just beginning, so the bush is loaded with edible, plum-sized fruit ripening from yellow to pink in the unrelenting afternoon sun.

Arzú bites into the cocoplum, quite literally eating the fruits of her labor. Together with other local Garifuna women, she planted cocoplum, seagrape, and other native coastal plants on and around the sand dunes in an effort to halt their advance and prevent further displacement of Santa Rosa de Aguán community residents.

“It fills me with pride to see this and to know that the women helped protect our community,” says Arzú, looking out at the burgeoning vegetation.

Arzú’s footprints crisscross the sandy expanse, tracing a path from the Caribbean Sea lapping at the northern coast of Honduras to the dunes now dotted with cocoplum and seagrape. Twenty years ago, the area looked nothing like this. Where there are now dunes, there used to be houses. One of the three main streets in Santa Rosa de Aguán once ran roughly where a narrow beach now separates the dunes from the sea, says Arzú.

In 1998, Hurricane Mitch and subsequent flooding altered the landscape and coastline. A year or so later, wind whipping in from the sea began to shape sand dunes, and the dunes started to advance into the community. Between the flooding, altered coastline, and blowing sand, hundreds of local residents were displaced, forced to relocate to other settlements and communities. The advancing sand swept through a row of houses, as well as the entire northwestern tip of the community. Today, however, the vegetation planted around the community by Garifuna women helps hold the dunes at bay and creates a natural barrier offering some protection from future storms and coastal erosion.

Honduras has the distinction of being one of the countries most vulnerable to climate change. In the face of such great risk, Santa Rosa de Aguán is just one of several coastal communities taking action to protect themselves from the impacts of climate change. Their solution isn’t high-tech or even high-cost: it’s native plants and trees.

Honduras tops the list of countries that have been most vulnerable to extreme weather events over the past two decades. Each year, Germanwatch, a German non-profit organization, prepares a briefing paper examining the quantified impacts of such events, determining which countries have been most impacted each year and over time by analyzing data on total and per capita death tolls as well as losses in dollars, by total and in relation to each country’s GDP.

From 1996 to 2015, nearly 11,000 documented extreme weather events directly resulted in more than 528,000 deaths worldwide and more than three trillion dollars in losses, according to the Germanwatch Global Climate Risk Index 2017. Honduras retained its number one spot as the most vulnerable country over the 20-year period (though not on an annual basis), followed by Myanmar and Haiti. Nicaragua and Guatemala, Honduras’ neighbors, came in fourth and ninth, respectively.

“These results emphasize the particular vulnerability of poor countries to climatic risks, despite the fact that the absolute monetary losses are much higher in richer countries. Loss of life and personal hardship is also much more widespread especially in low-income countries,” wrote the authors of the Global Climate Risk Index 2017 briefing paper published in November 2016.

“Regarding future climate change, the Climate Risk Index may serve as a red flag for already existing vulnerability that may further increase in regions where extreme events will become more frequent or more severe due to climate change,” they wrote.

Many Hondurans don’t need another red flag. Changing rainfall patterns and extended periods of drought are already having severe impacts on subsistence farmers in interior and southern areas of the country. Storms and coastal erosion have been affecting communities along the Caribbean coast. And that’s just in recent years.

Despite recent hardships, Hurricane Mitch is the main reason Honduras remains at the top of the Global Climate Risk Index list. Hurricane Mitch made landfall in Honduras in late October 1998, and the ensuing days of torrential rains led to landslides and intense flooding. More than 7,000 people were killed, an estimated 1.5 million people were displaced, and damages amounted to more than two billion dollars.

Right across the Aguán River from the narrow, sandy strip of land now home to the dunes, more than 40 people were killed. Hundreds more on both riverbanks were displaced. Santa Rosa de Aguán’s precarious landscape between the mouth of the Aguán River and the Caribbean was altered, and the sea, and later the sand dunes, crept into the community.

“We saw that the problem in Santa Rosa de Aguán is climate change. So we asked OFRANEH for help,” says Arzú. She has now become the vice president of OFRANEH, a federation representing the more than 40 Garifuna communities spread out along the Caribbean coastline of Honduras.

Among themselves, most Santa Rosa de Aguán residents converse in the Garifuna language, which belongs to the Arawak family. The Garifuna arose as an Indigenous people on the Caribbean island of Saint Vincent in the early seventeenth century, when shipwrecked and escaped Africans trafficked as slaves mixed with the local indigenous Arawak and Carib populations. In 1797, the British expelled the Garifuna from Saint Vincent to the Central American coast, where they then spread out from Belize down to Nicaragua.

Back in Santa Rosa de Aguán, residents first had help from outside organizations to plant trees and shrubs on the sand dunes, but they weren’t native species and didn’t take. A local resident suggested using common native coastal plants, and with assistance from OFRANEH, a group of 35 local women established a nursery with cocoplum, seagrape, and other species. They ended up with some 3,600 seedlings between 2009 and 2010 and the vegetation took care of itself once the women planted it on and around the sand dunes.

“We managed to combat climate change to some extent,” says Arzú. She thinks a similar approach could help mitigate climate impacts in other coastal communities. “It worked for us.”

Further west along the coast, a small group of dedicated environmentalists from the community of El Cacao has been working hard to protect the Cacao Lagoon and adjacent wetlands that sit between their community and the Caribbean.

The current focus of the El Cacao group is maintaining the stands of mangroves they planted within the 6,730 hectare wetland area, says Rafael Benítez, a local tour guide who plays a key role in El Cacao’s conservation efforts. In order to flourish, the young planted mangroves need to be cleared of vines that strangle them. Mangroves are naturally occurring in the area, and the growing stands planted by locals supplement the existing towering mangrove trees in the area.

“These mangroves protect us,” says Benítez while paddling down the mile-long Cacao Lagoon from the edge of the community to the sea. “They serve us as a protective barrier for the community.”

Hurricane Mitch didn’t really affect El Cacao much, he says with pride. The tall red mangrove trees along the coast are a natural windbreak and help dissipate storms rolling in from the sea. And the wetlands help mitigate even the most extreme rains. “There’s no flooding of any kind here,” says Benítez.

It’s only in the past few decades, however, that local attitudes about the mangroves and lagoon have shifted to conservation. In the past, red mangrove trees were affected by the sale of their bark, used to tan leather because of its deep red tannins. They were also used by local residents as firewood for cooking. 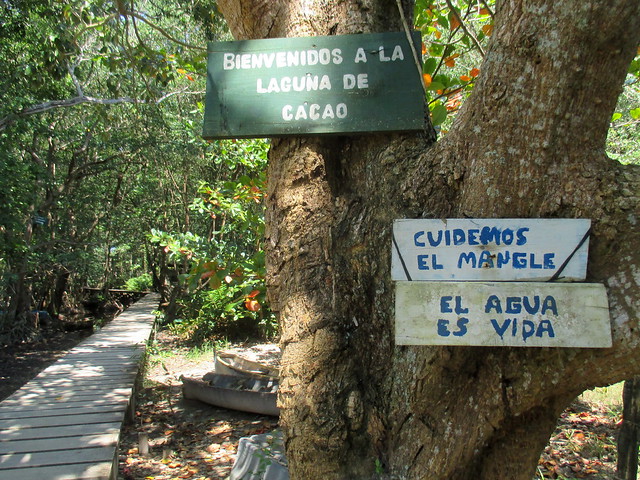 The lagoon, wetlands, and community are now within the Nombre de Dios National Park, named for the Nombre de Dios (Name of God) mountains towering not far from the coast. However, well before the government established the park in 2000, some El Cacao residents became concerned with the environmental destruction in the area and began organizing to promote conservation, says Benítez. Aware of how past conservation efforts helped protect the community from Hurricane Mitch and other storms, Benítez and others have since taken up the mantle.

El Cacao residents established a nursery for red, black, and white mangrove species, all native to the area, as well as other trees. With small grants here and there, and occasional assistance from the foundation that co-manages the national park, they were able to get the initiative off the ground and pay a dozen local women to manage the nursery and help with subsequent reforestation efforts in the wetlands. They have grown and planted thousands of young trees. These days Benítez and seven other eco-tourism guides from El Cacao maintain the planted mangrove stands on a volunteer basis, but they hope to expand reforestation and other activities.

If the thriving wildlife in the area is any indication, the local conservation work is paying off. Bright blue morpho butterflies flutter amidst the mangrove trees, trogons call out from the greenery, and a mantled howler monkey sits up on a high tree branch and peers down at the boat floating by. The area is also home to agoutis, coatimundis, armadillos, white-tailed deer, and a host of other wildlife, says Benítez.

He would like to share the experience of climate change mitigation and conservation efforts in El Cacao with other coastal communities in Honduras. The Honduran government has a National Climate Change Strategy, but little action has been taken relative to the country’s severe vulnerability. The government has done nothing to support the local efforts in El Cacao, says Benítez, and he doesn’t think other coastal residents should hold their breath for assistance.

“If we sit around and wait until the government…” he starts to say before trailing off. “I think this needs to come from the initiative of communities.”