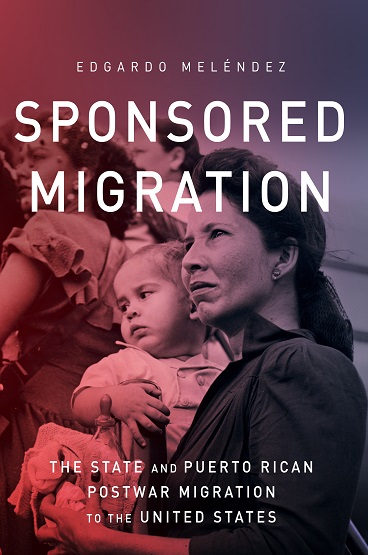 Description: “Sponsored Migration: The State and Puerto Rican Postwar Migration to the United States is an impressively well-researched book that argues that the government of Puerto Rico organized the great migration of the 1950s via multiple interventions into education, travel regulation, and migrant assistance in the United States. Was Puerto Rican migration a domestic phenomenon, or an international one? The thorough analysis of this hybrid case offers an excellent anchor for comparative studies of migration.” —Dr. César Ayala, author of Puerto Rico in the American Century: A History since 1898

Sponsored Migration places Puerto Rico’s migration policy in its historical context, examining the central role the Puerto Rican government played in encouraging and organizing migration during the postwar period. Meléndez sheds an important new light on the many ways in which the government intervened in the movement of its people: attempting to provide labor to U.S. agriculture, incorporating migrants into places like New York City, seeking to expand the island’s air transportation infrastructure, and even promoting migration in the public school system. One of the first scholars to explore this topic in depth, Meléndez illuminates how migration influenced U.S. and Puerto Rican relations from 1898 onward.